Conservative jurist Amy Coney Barrett was sworn in as the 115th justice on the United States Supreme Court on Monday night, an hour after the Republican-controlled Senate confirmed her nomination, delivering President Donald Trump a landmark win just a week before the crucial presidential election. 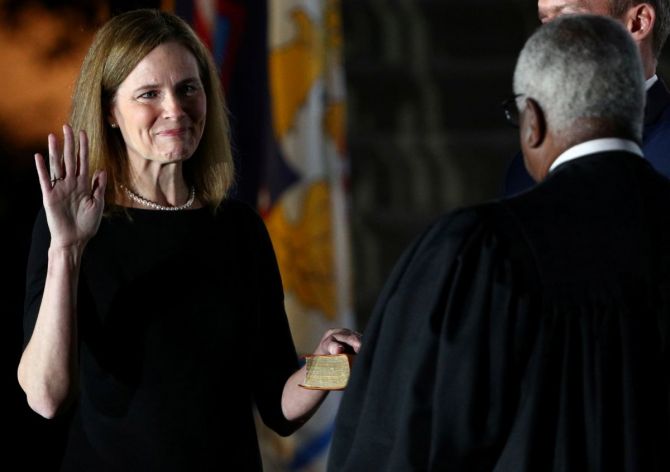 IMAGE: Judge Amy Coney Barrett holds her hand on the Holy Bible as she is sworn in as an associate justice of the US Supreme Court by Supreme Court Justice Clarence Thomas on the South Lawn of the White House in Washington, DC. Photograph: Tom Brenner/Reuters

The Senate confirmed the nomination of Barrett as the Supreme Court Judge by 52-48 votes, overcoming the unified opposition of Democrats.

Barrett, a 48-year-old religious conservative, was administered the official constitutional oath by Justice Clarence Thomas on the South Lawn of the White House alongside President Trump.

"I stand here tonight, truly honoured and humbled," she said shortly after she took the constitutional oath.

"This is a momentous day for America, for the United States Constitution and for the fair and impartial rule of law," said Trump in his remarks on the occasion.

"She is one of our nation's most brilliant legal scholars, and she will make an outstanding justice on the highest court in our land,” he said.

Out of nine Supreme Court Justices, Trump, so far, has nominated three of them.

In the US a Supreme Court justice is appointed for life and does not have a retirement age. Barrett's confirmation creates a 6-3 conservative majority on the court.

"It is highly fitting that Justice Barrett fills the seat of a true pioneer for women: Justice Ruth Bader Ginsburg. Tonight, Justice Barrett becomes not only the fifth woman to serve on our nation's highest court, but the very first mother of school-aged children to become a Supreme Court justice. Very important,” Trump said.

The opposition Democratic party has decried the Senate for confirming her nomination. Democratic presidential candidate Joe Biden had said that the new judge should have been selected by the winner of the November 3 elections. Trump, however, defended his decision.

"I want every American child watching to understand that this is a very special and important ceremony. We are fulfilling the duty that passes to each new generation to sustain the national traditions and virtues that make possible everything we have achieved before that we will do tomorrow," Trump asserted at the White House.

Grateful for the confidence of the Senate in her, Justice Barrett in her remarks pledge to the American people that she will discharge her duties to the very best of her ability.

"The confirmation process has made ever clearer to me one of the fundamental differences between the federal judiciary and the United States Senate, and perhaps the most acute is the role of policy preferences," she said. 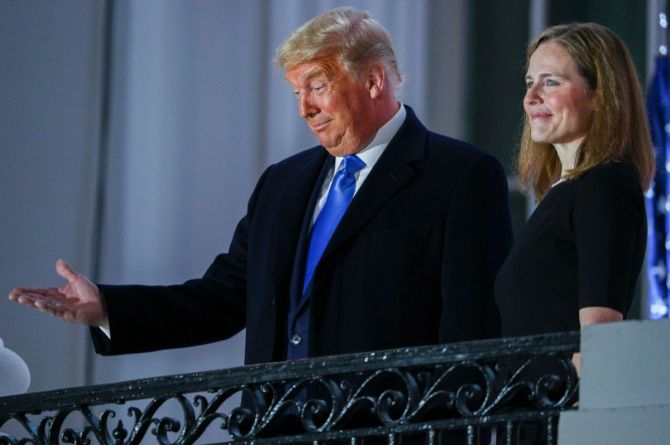 IMAGE: US President Donald Trump gestures as he poses with US Supreme Court Associate Justice Amy Coney Barrett on a White House balcony after she was sworn in to serve as an associate justice of the US Supreme Court. Photograph: Tom Brenner/Reuters

Federal judges don't stand for election. Thus, they have no basis for claiming that their preferences reflect those of the people. This separation of duty from political preference is what makes the judiciary distinct among the three branches of government, Barrett said.

"A judge declares independence not only from Congress and the President, but also from the private beliefs that might otherwise move her. The Judicial Oath captures the essence of the judicial duty the rule of law must always control," she said.

"Today Republicans denied the will of the American people by confirming a Supreme Court justice through an illegitimate process—all in their effort to gut the Affordable Care Act and strip health care from millions with pre-existing conditions,” she said.

"Tonight's vote to confirm Amy Coney Barrett as a Supreme Court justice is a disgrace, not only because of what she will do when she gets on the bench, but because of the entire process, which was pushed through with extraordinary hypocrisy by Senate Republicans in the last days of a president's term," Senator Bernie Sanders said.

Eight days from Election Day, after 60 million Americans have already cast their ballots, Trump and the Republican Senate have committed an act of supreme desperation by jamming through a Supreme Court justice – all so that they can achieve their years-long campaign to destroy Americans' health care, said House Speaker Nancy Pelosi.

"With this usurped Supreme Court seat, the President is ripping away millions of families' health care in the middle of a pandemic that has infected over 8.6 million and killed nearly one-quarter of a million Americans.

"In her confirmation hearing, Justice Barrett refused to answer whether she believes that Medicare is constitutional. She refused to acknowledge the scientific fact that climate change is happening, saying she isn't a scientist, calling it 'controversial',” she said.

"The President's Supreme Court manipulation threatens the very values and rights that define and distinguish our nation: a woman's constitutional right to make her own medical decisions, the rights of LGBTQ Americans, the right of workers to organize and collectively bargain for fair wages, the future of our planet and environmental protections, voting rights and the right of every American to have a voice in our democracy,” Pelosi said. 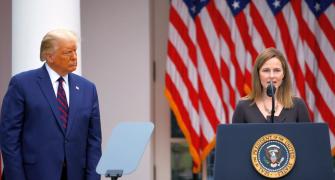 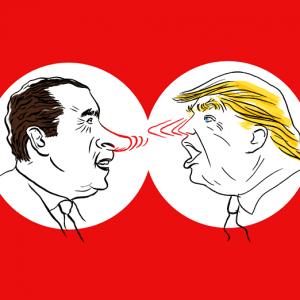