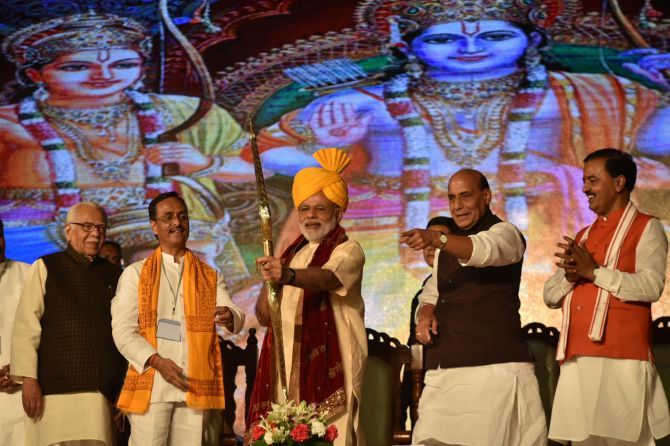 With the battle for Uttar Pradesh looking too close to call and a Samajwadi Party (SP) and Congress pre-poll alliance a possibility, the Bharatiya Janata Party (BJP) is looking at bringing back the Ram Janambhoomi issue.

An SP-Congress alliance is likely to consolidate the Muslim vote in their favour.

However, this would also give the BJP space for working towards a counter-polarisation of a consolidated Hindu vote.

The Ram Janambhoomi-Babri Masjid case is pending in the Supreme Court. While the case is unlikely to be heard day to day as yet, as has been demanded by BJP Rajya Sabha member Subramanian Swamy, the Sangh Parivar is already making efforts to bring the issue back in the public discourse.

The BJP national executive meet in Delhi, scheduled for Friday and Saturday, will have speeches by leaders that might mention the Ayodhya issue, sources said.

In end-December, the Parivar marked with some fanfare the 67th anniversary of the controversial appearance of an idol in the Babri Masjid premises.

The Vishva Hindu Parishad, a Parivar affiliate, also organised events to mark the anniversary and its leading lights said they wanted an out-of-court settlement.

The petitions on the case are currently before the apex court bench of Justices Arun Mishra and Amitava Roy.

A source in the lawyers' cell associated with the Parivar said a battery of lawyers are prepared once the case comes for listing at the end of this month. The BJP hopes to create a buzz around the issue at the time

The party is also preparing to criticise state Chief Minister Akhilesh Yadav for going against India's 'civilisational ethos' by leading a coup against his father, Mulayam Singh Yadav.

"In our society, the father has the right to write a will, not the son... It amounts to removal of an authorised president by an unauthorised chief," BJP General Secretary Bhupender Yadav said on Wednesday regarding Mulayam's ouster as SP president in favour of Akhilesh.

A BJP leader said the party had taken heart from the fact that its 'Parivartan Yatra' that travelled 17,000 km across UP didn't face any protests on account of the Narendra Modi government's note ban decision.

The Congress made some pro-alliance noises in Uttar Pradesh, even as a patch-up attempt between Chief Minister Akhilesh Yadav and Samajwadi Party patriarch Mulayam Singh proved futile.

Ghulam Nabi Azad, in charge of Congress affairs in Lucknow, hinted to party seniors there at a possible alliance with the SP.

He said the Congress was preparing to fight in all 403 legislative assembly seats for the coming election, but there was also a need for secular forces to come together to defeat the 'communal' BJP.

Congress Chief Ministerial nominee Sheila Dikshit told Business Standard: "I am prepared to withdraw my candidature if an alliance happens with the SP."

At the Congress briefing of journalists, spokesperson Ajoy Kumar also said the party might go with like-minded players in UP to stop the BJP.

These developments took place on a day the Election Commission of India announced a seven-phase poll in the state, from February 4 to March 8. The results will be out on March 11.

Many Congress seniors and others in UP favour an alliance with the SP. Dikshit said the decision would be by party chief Sonia Gandhi and Congress Vice-President Rahul Gandhi, when the two returner from their vacation abroad.

On Monday, addressing a rally in Lucknow, Prime Minister Narendra Modi had lashed at the SP, Congress and Bahujan Samaj Party, saying they had each failed to develop the state. And urged voters to give his BJP a complete majority in UP.

Dikshit said a Bihar-like alliance, where the Congress-JD-RJD combine defeated the BJP in 2015, could be worked out in UP as well.

"Akhilesh has been saying the SP and Congress together can win 300 seats," she said.

Congress sources said Rahul Gandhi is open to a pact with the Akhilesh faction, but averse to one with Mulayam.

The prospective alliance, Dikshit said, would depend upon the benefits for the Congress, in terms of number of seats to contest.

In Lucknow, the two SP groupings refused to budge from their respective positions despite veteran Azam Khan holding extensive parleys with both.

"There is no agreement," said Ram Gopal Yadav of the Akhilesh group, referring to a two-hour meeting between Akhilesh and his father on Tuesday.

At the ECI, both have claimed rights over the SP poll symbol, the bicycle.

"The Commission while keeping in mind precedents and set principles followed till now, will examine the documents before us and will take an appropriate decision at the right time," Chief Election Commissioner Nasim Zaidi said after announcing the poll schedule.

"A patch up is too late. Netaji(Mulayam) himself went to the EC," said a source close to Akhilesh, indicating the chief minister's camp was in no mood for a compromise, which entails sacking controversial party leader Amar Singh and shifting Mulayam's brother Shivpal Yadav to Delhi.

BSP chief Mayawati welcomed the seven-phase elections in UP and said the state's police machinery could be used for political purposes by the Akhilesh Yadav government.

She urged the EC to keep an eye on rivals BJP, SP and Congress and ensure strict compliance of the model poll code.

"These parties are in the habit of flouting the poll code as has been experienced in 2014 Lok Sabha polls," she said. 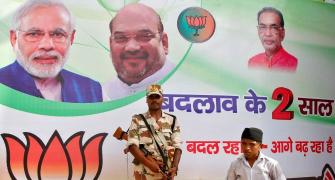 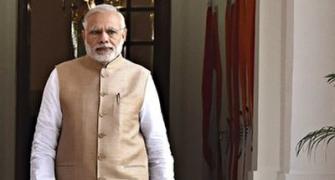 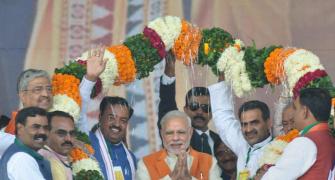 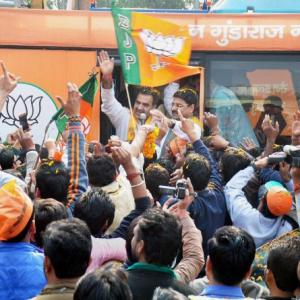