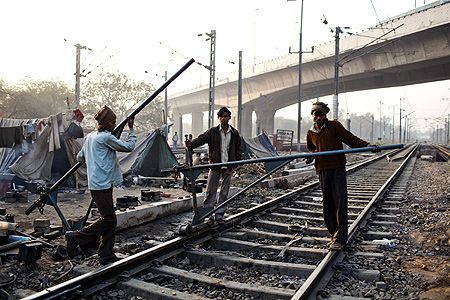 A Dalit boy, whose marriage to a higher caste girl triggered anti-Dalit violence in three villages of Dharmapuri district in November last, was found dead along a railway track in that town on Thursday, a day after she said she would never go back to him and would stay with her mother.

The Railway police said his body was found along a track behind the government arts college in Dharmapuri. News of the boy's death led to a tense situation in Dalit areas in Naickenkottai, with many of them thronging the GovernmentMedicalCollege hospital, where his body was taken.

Dharmapuri Superintendent of Police Asra Garg said that the railway police are conducting an inquiry and that it was too early to say if there any foul play. Police pickets have been posted in sensitive areas in Naickenkottai.

The girl Divya told mediapersons on Wednesday after appearing for a hearing in Madras high court that she has been under tremendous pressure all along and was unable to forget her father who committed suicide after her marriage.

She also said she no longer wanted to live with her husband, but her mother. The bench comprising Justices M Jayachandran and M Sunderesh had reserved the orders for Friday.

Her mother had filed a Habeas Corpus Petition to produce her before the court and set her at liberty. On July 1, Divya had told the Court she would go with her mother "for the time being". She also said she had no problems in the house of her husband or with her other-in-law, but was haunted by incidents of her father's death, who committed suicide after her marriage with Ilavarasan of Natham village.

Divya's mother too had opposed the marriage on Oct 14. Three villages of Dharmapuri district -- Natham, Kondamapatty and Annanagar-- witnessed violence and about 296 huts belonging to Dalits were torched on November 7 after the girl's father committed suicide.

Several writ petitions were filed and the court ordered a probe into rehabilitation measures taken in Dalit colonies under the committee headed by Indian Administrative Officer officer Vaski,  which submitted a 5000-page report to the high court.