Mamata elevates nephew to 2nd most important post in TMC

Trinamool Congress supremo Mamata Banerjee on Saturday elevated her nephew and MP Abhishek Banerjee as the party's all-India general secretary, the second-most important post in the organisation, a senior leader in Kolkata said. 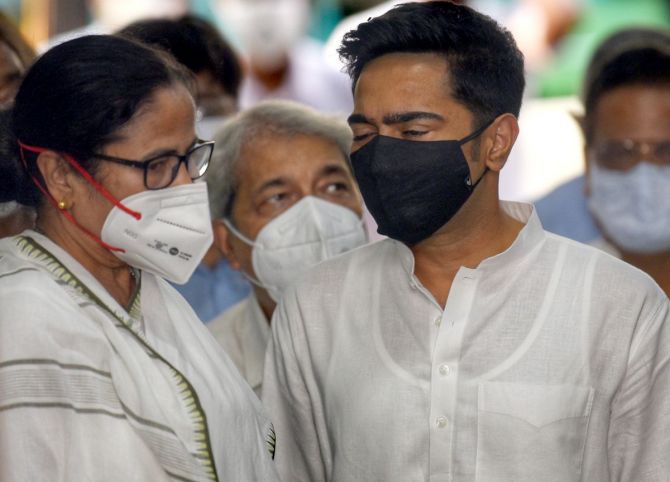 Addressing a press conference in Kolkata, TMC secretary general Partha Chatterjee stated that the working committee has zeroed in on a new policy, under which one person in the party can hold one post, and the decision has been duly ratified by the core committee members.

"As the party chief, Mamata Banerjee has made MP Abhishek Banerjee the national general secretary of the All India Trinamool Congress," Chatterjee said, following two back-to-back organisational meetings, which was also attended by political strategist Prashant Kishor as an invitee.

Kishor was hired by the ruling party as its adviser for assembly elections.

The elevation of Abhishek, who is often referred to as the possible successor to Mamata Banerjee in the party, assumes significance as he happened to be the focal point of multiple attacks by the BJP's top leadership during poll campaigns in the state.

The 33-year old leader emerged as the number two in the TMC in the run-up to the elections, turning out to be the most prominent campaigner after the supremo, often locking horns with Bharatiya Janata Party leader and the current Leader of Opposition, Suvendu Adhikari, who was a former minister in the Mamata Banerjee cabinet before he switched sides ahead of the polls.

The Diamond Harbour MP and Adhikari continue to hurl stinging barbs on one other.

"We thanked Mamata Banerjee in the meetings for the way she led the election campaigns, addressing 150 to 160 public meetings despite her injury," Chatterjee said.

Banerjee had suffered an injury in her leg during electioneering in Nandigram, where Adhikari, however, managed to defeat her by over 1,900 votes.

She is likely to contest bypoll from home turf Bhawanipore to get elected to the state legislature.

Several other changes were made in the organisation on Saturday, with MP Kakali Ghosh Dastidar being made the women's wing chief, and actor-turned-politician Sayoni Ghosh the youth wing president -- a post earlier held by Abhishek.

Kunal Ghosh, a spokesperson for the TMC, has been appointed as the general secretary of the party's state committee, Chatterjee said.

Similarly, South Kolkata MP Mala Roy has been made the president of TMC's 'Banga Janani Bahini'.

Ritabrata Banerjee, a former Communist Party of India-Marxist Rajya Sabha MP who joined the Mamata Banerjee camp after being expelled by the Marxist party, will head the TMC's state labour wing.

Veteran leader Purnendu Basu will helm the Khet Mazdoor cell of the party, and filmmaker Raj Chakraborty has been made TMC cultural cell president.

Apart from that, Ashim Majhi, Ashish Chakraborti, Becharam Manna, Arjun Ghosh and two others have been nominated as secretaries in the party's state unit.

Chatterjee further clarified that the party did not hold any discussion on turncoats, who had crossed over to the BJP before the polls, and were now willing to rejoin the camp.

"The issue was not discussed, party chief Mamata Banerjee will take a call on that later," he said.

Several leaders, including ministers and local-level functionaries, who had made a beeline for BJP membership ahead of the polls, have now queued up again to return to the TMC fold -- prominent among them being former MLAs Sonali Guha and Dipendu Biswas.

A few others have also been sending feelers to the TMC leadership about their eagerness to return.

Abhishek's visit to a city hospital recently to meet BJP national vice-president Mukul Roy's wife, and effusive praise of the TMC MP by the saffron party leader's son have given rise to speculation about a possible change in equation.

Mukul Roy, once the national general secretary of the TMC, was removed from the post in February, 2015.

Senior ministers, including Firhad Hakim and Jyotipriyo Mallick, attended the TMC working committee meeting during the day, which was chaired by its supremo.

Later, a virtual meeting was held among the party's core committee members, which also saw the presence of organisational leaders, MPs, MLAs and district-level leaders.

Chatterjee said that the leaders during the meetings have decided to demand abolition of GST on vaccines and free-of-cost inoculation for all.

He also said that more changes in the district-level leadership are in the offing.

"The party has decided to work towards gaining foothold in other states," the senior TMC leader added. Will stand by ex-CS in tussle with Centre: Mamata