News
Business
Movies
Sports
Cricket
Get Ahead
Money Tips
Shopping
Sign in  |  Create a Rediffmail account
Rediff.com  » News » This is what our 'toddler' solar system looked like billions of yrs ago 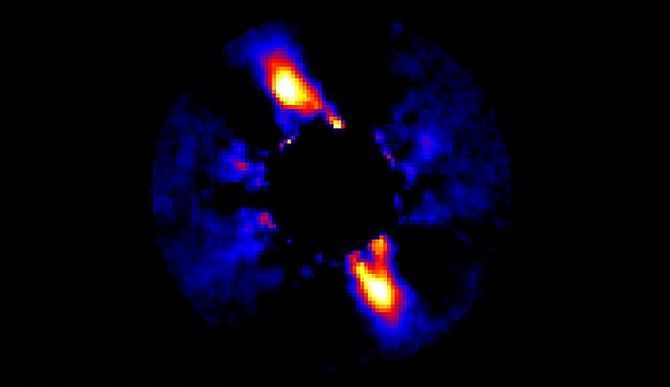 Scientists have found a young planetary system which may enable them to understand what our own solar system looked like as 'toddler' billions of years ago.

Using the Gemini Planet Imager at the Gemini South telescope in Chile, an international team of astronomers, including University of Cambridge researchers, identified a disc-shaped bright ring of dust around a star only slightly more massive than the Sun, located 360 light-years away in the Centaurus constellation.

The disc is located between about 37 and 55 astronomical units (3.4 and 5.1 billion miles) from its host star, which is almost the same distance as the solar system's Kuiper Belt is from the Sun. The brightness of the disc, which is due to the starlight reflected by it, is also consistent with a wide range of dust compositions including the silicates and ice present in the Kuiper Belt.

The Kuiper Belt lies just beyond Neptune, and contains thousands of small icy bodies left over from the formation of the solar system more than four billion years ago. These objects range in size from specks of debris dust, all the way up to moon-size objects like Pluto-which used to be classified as a planet, but has now been reclassified as a dwarf planet.

By using models of how planets shape a debris disc, the team found that 'eccentric' versions of the giant planets in the outer solar system could explain the observed properties of the ring.

Principal investigator Thayne Currie said that it was almost like looking at the outer solar system when it was a toddler.

Dr Nikku Madhusudhan of Cambridge added that to be able to directly image planetary birth environments around other stars at orbital distances comparable to the solar system is a major advancement. Their discovery of a near-twin of the Kuiper Belt provides direct evidence that the planetary birth environment of the solar system may not be uncommon.

This is the first discovery with the new cutting-edge Gemini instrument. The star, going by the designation HD 115600, was the first object the research team looked at.