This is genocide, says HC on alarming Delhi pollution

The alarming pollution level is literally 'capital punishment' for Delhi'ites who are being robbed of three years of their lives due to it, Delhi High Court said on Thursday, holding government's inaction and stubble burning in Punjab as being responsible for the "genocide". 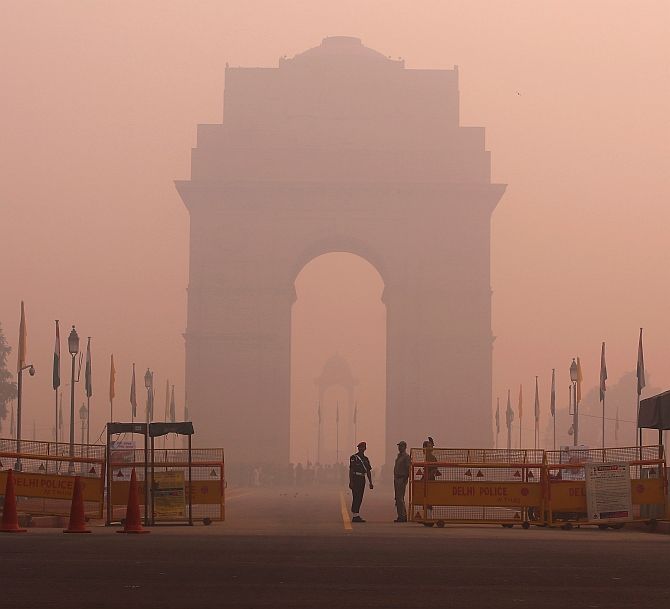 "It is killing us," a bench of justices Badar Durrez Ahmed and Ashutosh Kumar said, adding that the grave situation was leading to the "decimation" of more than 60 million life years or one million deaths.

It also asked whether votes were more important than the lives of those who vote.

"It is literally capital punishment as the capital is being punished and that too for no offence. People are being killed in the capital. You cannot kill Delhi," the high court said, terming reduction in life expectancy due to pollution and government inaction over it as "genocide" and "murder".

Referring to a WHO study on the effects of air pollution published in a news article, the court said pollutants in the air in several cities of India, especially Delhi, "exceeds the standards", as 13 out of the world's 20 most polluted cities were in our country.

The bench also noted that Delhi had the highest number of people suffering from respiratory ailments and also deaths due to it.

It said the government was duty bound to remove the threat of air pollution, but "despite repeated direction" and public opinion, the "governments responsible have not acted in the manner they should have".

"As per the report, air pollution in a city like Delhi deducts three years from your life expectancy. Delhi has a population of over 20 million. So 60 million life years are being robbed from people of Delhi.

"With an average life expectancy of 60 years, it would mean that air pollution as its exists in Delhi takes one million lives. If this is not murder, what is? This is genocide. Government inaction is the culprit for shortening of life," the court said.

Referring to satellite images submitted by the Delhi Pollution Control Committee in connection with stubble burning in northern India, the court said level of pollutants in the air peaked first week of November and biomass burning in Punjab was the "main culprit".

"Unfortunately, state of Punjab is in denial mode and contests allegations that they are responsible for air pollution in Delhi. Punjab has not taken action as have the states of Haryana and Rajasthan, despite our clear warning earlier," the court said.

The court said before issuing contempt notice to Chief Secretary of Punjab, "we want an affidavit from him indicating why our directions were not carried out and what prevented him from doing so".

It gave the counsel for Punjab time till November 18, the next date of hearing, to place the affidavit before the court.

The bench made it clear that if it was not satisfied with the affidavit, it will issue contempt notice to the Chief Secretary.

It noted the submission of the counsel for Punjab that it would take "emergency measures" to put an end to stubble burning and expressed hope the steps would be implemented.

On the issue of "bursting" landfill sites and the "fires simmering" there which aggravate air pollution, the court said the only solution was to segregate the garbage and use it for generation of power.

In order to achieve this objective, the court directed the municipal authorities to put in place trash receptacles for segregation of bio-degradable and non-degradable waste.

The court said worldwide, landfills were not encouraged and emphasis was on waste recycling and an alternative was to set up waste to energy plants.

It noted the Delhi government's proposal to convert the closed-down thermal power plant at Rajghat into a waste to energy plant and said the project, which is estimated to take 18 months from start to finish, should be started at the earliest.

The directions came on a PIL initiated by the court on the issue of air pollution in the city.

Last month, while hearing the air pollution matter, the high court had asked the states of UP, Punjab, Rajasthan, Haryana to stop stubble burning for which the national capital every year grappled with the menace of haze. This was even after orders of the National Green Tribunal to stop the practice of burning of crop and agriculture residue.

Source: PTI© Copyright 2021 PTI. All rights reserved. Republication or redistribution of PTI content, including by framing or similar means, is expressly prohibited without the prior written consent.
Related News: Delhi, Punjab, Haryana, WHO, PIL
SHARE THIS STORY
Print this article