News
Business
Movies
Sports
Cricket
Get Ahead
Money Tips
Shopping
Sign in  |  Create a Rediffmail account
Rediff.com  » News » I wonder if there was more to YSR's death: Jagan's mother

I wonder if there was more to YSR's death: Jagan's mother

Rallying behind her son, Vijayamma, mother of YSR Congress leader Jagan Mohan Reddy along with other members of her family staged a dharna outside the Dilkusha Guest Huse in Hyderabad.

Vijayamma had strong words for the Congress, who she accused of staging a conspiracy against her entire family.

"After watching the manner in which the Congress has treated my son, I am beginning to doubt the death of my husband and wonder if there was more to it," said Vijayamma

Staging a sit out outside the guest house were Vijayamma, her daughter, other family members and Jagan's wife. They have demanded that Jagan be let off as the arrest itself is very undemocratic in nature.

"When he was so cooperative with the Central Bureau of Investigation during the questioning, what was the need to arrest him so suddenly?" Vijayamma questioned.

"I want answers and I shall fight for justice. I expect Congress President Sonia Gandhi to give me answers for all that has happened to my family," a visibly-upset Vijayamma told mediapersons in Hyderabad.

Meanwhile, the Andhra Pradesh police has been on its toes. They have called in for additional forces as they have intelligence inputs that Jagan's supporters are expected to create trouble in various parts of the state. 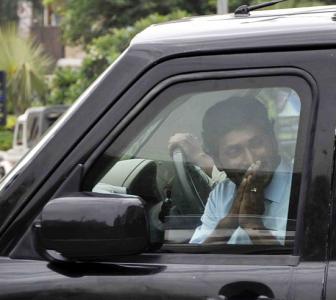 IN PICS: CBI arrests Jagan Mohan Reddy
Nehru remembered on 48th death anniversary
No respite for Jagan; to be quizzed again on Sunday 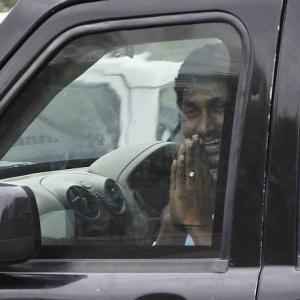 Jagan's mother to campaign for party in AP by-polls