The National Rifle Association has set its sights on killing the United States Senate’s confirmation of Dr Vivek H Murthy’s nomination to be the first-ever Indian-American Surgeon General.

The NRA, known for its pressure tactics against lawmakers who express even a tinge of support for gun control, has been citing Dr Murthy’s statements and tweets deploring the gun violence in the US.

Some red state Democratic Senators are cowering under the frontal assault by the NRA to ‘score’ the vote on Dr Murthy’s confirmation, which is this powerful gun lobby’s modus operandi to threaten lawmakers that if they vote on any gun control measures or approve the nomination of those the NRA perceives as gun control advocates, it would target these lawmakers for defeat in their upcoming elections.

Earlier this month, Dr Murthy’s nomination was approved by a vote of 13-9 on partisan lines -- with the Democrats for and Republicans against -- by the Senate Health, Education, Labour and Pensions Committee, and sent to the full Senate for a vote.

Though Senate Majority Leader Harry Reid (Democrat, Nevada) has not scheduled a vote -- which could be later this month or in early April -- the NRA served notice that it would ‘score’ the vote by sending a letter to every Senator, saying it would strongly oppose Dr Murthy’s confirmation.

The NRA’s opposition arises out of a letter Dr Murthy, 36, had sent to members of Congress months ago as the co-founder of the national grassroots health-care advocacy group called Doctors for America, and also some of his tweets that irked the NRA.

In his missive to lawmakers, Dr Murthy had said, ‘As health-care professionals who are confronted with the human cost of gun-violence everyday, we are unwavering in our belief that strong measures to reduce gun violence must be taken immediately.’

In a tweet, claiming that that firearms safety was an issue of public health, Dr Murthy had written, ‘Tired of politicians playing politics w/ guns, putting lives at risk b/c they’re scared of NRA. Guns are health care issue #debatehealth.’

An incensed NRA March 14 fired off a ‘grass-roots alert’ to millions of its e-mail subscribers, urging them to immediately ‘contact your senators and ask them to oppose confirmation of President Obama’s radically antigun nominee.’

Cox cited a list of reasons that had convinced the group that Dr Murthy has ‘a record of political activism in support of radical gun-control measures.’

On Fox News channel’s The Kelly File, Cox declared, ‘Murthy’s not just a gun-control supporter, he’s a gun-control activist. And it’s clear that his agenda is to treat a constitutional freedom like a disease.’

Dr Murthy, Cox said, ‘supported every radical gun-control scheme ever thrown out there,’ including bans on ‘popular semiautomatic firearms.’

February 4, the Senate committee grilled Dr Murthy on his alleged anti-gun bias. He asserted that -- if confirmed as Surgeon General -- his focus would be on obesity, and assured Republican senators that he would not use his position as a ‘bully-pulpit’ for any gun-control advocacy.

He said his concern over the proliferation of guns was a direct result of his emergency room experiences, where he had seen firsthand the trauma cause by gun violence.

Last week, in the wake of the NRA’s campaign and vulnerable Democrats running in red states indicating they would vote ‘no’ -- which could torpedo Dr Murthy getting by even with a simple majority if all of the Republicans voted against him -- The New York Times reported the White House was considering delaying the vote on Dr Murthy, or even withdrawing the nomination altogether because it could not ensure that all Democrats would vote lock-step in Murthy’s favour.

Apparently, the White House did not want a replay of the defeat earlier this month of President Obama’s nominee Debo P Adegbile to head the Department of Justice’s Civil Rights Division.

Red state Democrats and even a few others voted against Adegbile’s confirmation, citing his defense of Mumia Abu-Jamal in the appeal against the death sentence for killing a Philadelphia police officer.

One such red state lawmaker up for re-election, Senator Mark Begich of Alaska, after being bombarded with angry letters from his constituents after the NRA informed them about Dr Murthy’s alleged antigun view, said he would ‘very likely’ vote ‘no’ on Dr Murthy’s nomination ‘if it comes to the floor’.

‘I share your concern about Dr Murthy’s views in favor of gun control,’ Begich said.

Other Democratic senators like Mary Landrieu of Louisiana, Mark Pryor of Arkansas and John Walsh of Montana, who represent states where they could lose in close races if they are targeted by the NRA, were also likely to vote against Dr Murthy, which could put his confirmation in jeopardy.

US Senator Rand Paul (Republican, Kentucky), who is the darling of the Tea Party, wrote to Reid threatening to put a hold on Dr Murthy’s confirmation vote.

‘Dr Murthy has disqualified himself from being surgeon general because of his intent to use that position to launch an attack on American’s rights to own a firearm under the guise of a public health and safety campaign,’ Paul wrote.

‘The majority of Dr Murthy’s non-clinical experience is in political advocacy. Historically, the surgeon general of the United States has been a position with the purpose of educating Americans so that they may lead healthier lives, rather than advancing a political agenda.’

‘My guess is that, within a few weeks, Murthy will be persuaded to withdraw his nomination with some regretful words about getting past the controversy, saving the White House any more trouble,’ Waldman wrote.

White House Spokesman Jay Carney asserted that the President stood by the nomination.

‘Dr Murthy is a dynamic, entrepreneurial practitioner who had dedicated a lot of time, energy and passion to health and wellness,’ Carney said.

‘As Surgeon General, he will be a powerful messenger on these issues in each of the tenets of health -- nutrition, activity and resilience. Dr Murthy, as you know, was approved out of committee with bipartisan support. We expect him to get confirmed ultimately and be one of the country’s most powerful messengers on health and wellness.’

Carney acknowledged, ‘We are recalibrating our approach,’ but when asked if the White House had given up on pushing for Dr Murthy’s confirmation, said, ‘in answer to your question, no.’

That, Waldman wrote, this didn’t matter to the NRA.

‘What matters is fear and the NRA has certainly created a good amount of it,’ he wrote. 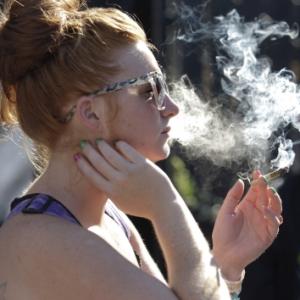 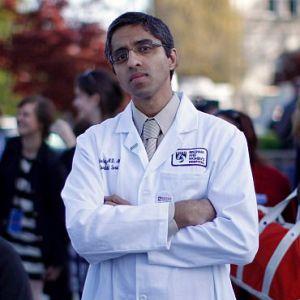