News
Business
Movies
Sports
Cricket
Get Ahead
Money Tips
Shopping
Sign in  |  Create a Rediffmail account
Rediff.com  » News » 'There are extreme voices in all of our religious traditions'

'There are extreme voices in all of our religious traditions' 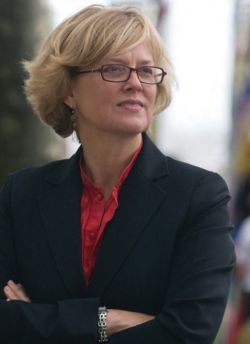 'The challenges of the world are too great for any one religious tradition to address alone.'

The best way to learn about other religions is not from books, but from people... Go talk to someone from a different faith tradition. Get to know them. Build up some trust.'

The Reverend Dr Katharine Rhodes Henderson, President of the Auburn Seminary founded in 1818 in covenant with the Presbyterian Church USA, is one of the most prominent inter-faith Christian leaders in America.

As president of a nearly 200-year-old seminary which was founded to prepare Presbyterian priests, she has played a key role in evolving it into a centre for training leaders from many faith traditions who seek inter-faith solutions to complex problems.

Dr Henderson is the first woman to receive Hofstra University's Guru Nanak Prize since the award was created in 2008 -- past winners include the Dalai Lama, and inter-faith leader and best-selling author Eboo Patel -- with the backing from the Ishar Bindra family.

The Auburn Seminary works through its movement-building initiative, Groundswell, as well as its programmatic areas of education, research, and media.

Reverend Henderson was raised in Louisville, Kentucky, earned her Masters of Divinity degree at the Union Theological Seminary in New York City, and her doctorate at Teachers College, Columbia University.

She is ordained in the Presbyterian Church and is the author of God's Troublemakers: How Women of Faith are Changing the World (2006).

How did inter-faith dialogue come into your life?

On a very literal level, the beauty and the importance of sitting at the table with people of other faiths was impressed upon me early.

As a child growing up, I spent hours with my neighbours Max and Ruth, who were Jewish. Throughout my girlhood, they impacted my life deeply. They welcomed me into their home and claimed me as their chosen family, and I became like a daughter to them.

To this day, I treasure the ruby ring they gave to me as a reminder of their love.

I also had the tremendous opportunity to be regularly exposed to passionate people of other faiths, as missionaries from Arab countries across the world broke bread with my family.

There was always a sense of reverence for me in these exchanges, as I heard their stories of how they were improving the lives of some of the most vulnerable among us.

No matter their faith, I saw how they lived out the values of my own faith by caring for those that Jesus loves.

What would you tell certain Christian denominations that condemn Hinduism, Islam and other religions?

God is all knowing and all powerful.

God can reveal God's self in whatever way God chooses to whomever God chooses.

Therefore, it is not up to humans to put limits on God.

It is not for us to judge other people.

It is for us to be as good a Christian, Jew, Muslim or Sikh as we can and to do the work of justice.

The challenges of the world are too great for any one religious tradition to address alone.

That is why at Auburn we work to build bridges and provide an alternative to divisive and polarising religious messages commonly heard in the public narrative.

What are some of the most important inter-faith activities that you have backed at the Auburn Seminary?

Most recently, following the tragic shooting in a Sikh house of worship in Oak Creek, Wisconsin, Auburn collected 4,000 letters of support and solidarity for the Sikh community. Auburn delivered these letters and served as a national inter-faith voice of support.

What is the importance of inter-faith dialogue in the post 9/11 world?

There are extreme voices in all of our religious traditions.

Those of us who come from a more open and tolerant perspective and share a vision for a more inclusive world need to work together to create that world.

If we can find a way to live together peacefully, then collectively we will be that much stronger to confront the injustices in our midst and do the necessary work of feeding the hungry, clothing the naked and creating systems that contribute to human flourishing.

Leaders of faith and moral courage -- whether they are Christian, Muslim, Sikh, Jewish or humanist -- are essential to building a just world.

Inter-faith dialogue is critical to building bridges toward peace and understanding.

As faith leaders, we must work together to build a movement for justice.

Our Face to Face Faith to Faith programme brings together young people living in regions of conflict for peaceful dialogue and shared work.

It is inspirational to see how these relationships help communities work toward peace.

What have you taken from other faiths, especially Sikhism, Hinduism and Islam, through the inter-faith dialogue?

There are elements of all of these religious traditions that I value, and I have certainly learned from the people who practice all of these other faith traditions.

These faiths represent the many and multi-faceted ways that God or the divine or the Spirit is made real in human life.

I am especially appreciative of the concept in Sikhism of wonder or awe. I think that is part of what makes human life rich and full and surprising.

I appreciate the values of my own tradition that are evident in these others: Care for creation, care of other human beings, awareness of a power beyond ourselves by whatever name -- God, Allah, the Divine.

My experience of God is enriched and enhanced by my exposure to other faith traditions, as well as their adherents.

I am a better Christian because of my experiences with those of other faiths.

What books would you recommend to a Christian to know better the other faiths?

The best way to learn about other religions is not from books, but from people.

In America, and all over the world, there is religious diversity around us.

Go talk to someone from a different faith tradition. Get to know them. Build up some trust.

Our faith traditions are alive, and they are best encountered in relationship with living beings.

As an author, I certainly appreciate how books can teach us. For me, one of the best primers on inter-faith understanding is The Dignity of Difference by Rabbi Jonathan Sacks.

His idea that God loves difference, that God created difference, so we must love it, too, underpins much of the multi-faith perspective. His book is a wonderful read that is accessible and inspiring. He dreams of paper microscopes, computers made of bubbles US: Interfaith panel to push for Gandhi monument