News
Business
Movies
Sports
Cricket
Get Ahead
Money Tips
Shopping
Sign in  |  Create a Rediffmail account
Rediff.com  » News » The many firsts at swearing-in of 9 SC judges

The swearing-in ceremony of nine Supreme Court judges, including three women, in one go on Tuesday has been unprecedented and would go into the annals of 71-year-long history of the apex court for having many firsts to its credit. 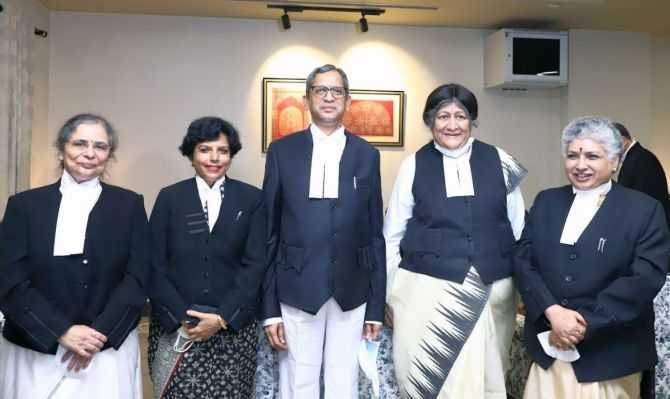 With the swearing-in of three women judges, justices Hima Kohli, B V Nagarathna and Bela M Trivedi , which happened for the first time in the apex court's history, the top court will have as many as four lady judges on its bench simultaneously, another first to its credit.

The top court, which came into being on January 26, 1950, has seen only eight women judges since its inception and the first one -- Justice M Fathima Beevi -- was elevated to the bench as late as in 1989.

"This is for the first time in the history of the Supreme Court of India when nine judges will be taking the Oath of Office in one go," the apex court had said.

The long-standing demand of citizens and rights activists to have a woman CJI will also be fulfilled for the first time in the independent India's history as Justice Nagarathna would be the first woman Chief Justice of India in September 2027.

In another first, the venue of the ceremony was shifted to the newly-built auditorium instead of the CJI's courtroom, the traditional place for such a ceremony.

The apex court, hearing cases through video-conferencing since March last year due to the pandemic, again for the first time held such a function permitting invitees to take part physically after the onset of COVID.

Again for the first time, the oath ceremony, which had been accessible to only those who were present inside the CJI's courtroom, was telecast and webcast simultaneously.

Family members of the judges, who were sworn in, and bar leaders of the high courts, where the new judges were working, were there in attendance in the auditorium.

The strength of the Supreme Court judges has now risen to 33, including the CJI, out of the sanctioned strength of 34. 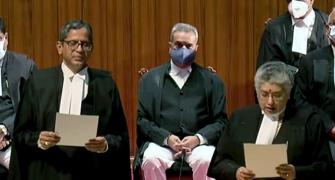