'If the political executive doesn't want an independent judiciary, it will be impossible for the judiciary to maintain its independence.' 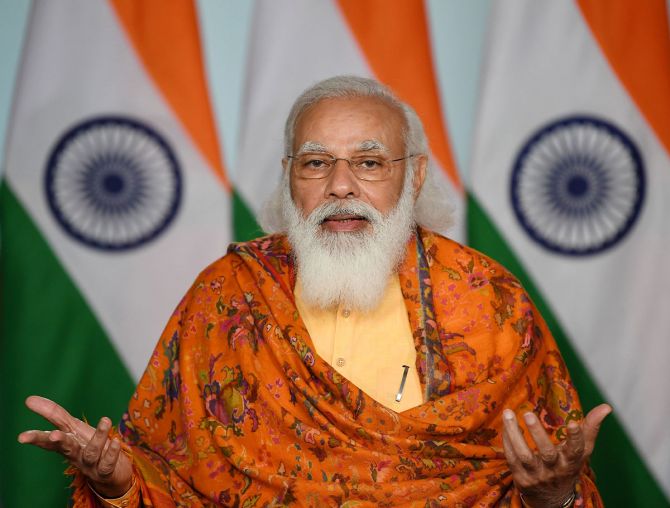 "Every political executive likes to have a timid judiciary irrespective of the party in power. And the irony is that protecting the independence of the judiciary is the responsibility of the political executive only," Justice Abhay Thipsay, a retired Bombay high court judge, tells Prasanna D Zore/Rediff.com in the concluding part of an enlightening interview. Justice Thipsay joined the Congress party after his retirement from the judiciary.

If at all the Supreme Court were to discourage petitions under Article 32, how will it impact the exercise of fundamental rights of Indian citizens?

As I said before, I don't think that the Supreme Court can 'discourage' it or it has power to discourage (such petitions).

Discourage is a very vague word; it is not legal terminology. One doesn't know in what way such petitions could be discouraged.

One certainly cannot think or believe that where there is merit in a petition, the Supreme Court will find some fault with that and will not entertain it or advise the petitioner to avail of some alternative remedy. I don't think 'discouraging' means that.

I really don't understand that because there is no such power of 'discouraging'.

After a petition is instituted in the Supreme Court, it can see the merits of that, and then if there is no merit, or there is no real grievance or there is no issue of infringement of fundamental rights, then it may not entertain that petition.

Such petitions may be rejected at that threshold only; I don't see any other way in which filing of such petitions can be discouraged.

The Supreme Court itself has laid down that where there is a meritorious case of gross and obvious infringement of fundamental rights, then the existence of alternative remedy is no ground to ask the person to go before another forum.

These are only guidelines; ultimately it is the conscience of the judges that will decide whether the petition is to be entertained or the petitioner should be asked to avail of other remedies for his grievances.

I am sure this law is well settled. Where it is a gross violation or infringement of fundamental right the Supreme Court will entertain (such petitions) irrespective of the fact that there could be other alternative remedies.

How do you look at the judiciary's role in helping citizens in their fight against majoritarianism, communalism, fascism, etc?

Well, it is very difficult to answer. I certainly feel that there has been a shift in the approach.

I find that in the initial period after independence the Supreme Court has given judgments which put the questions of personal liberty at a very high level and tried to protect it. But at that time, laws, some of which we call 'draconian', did not exist.

While the UAPA (Unlawful Activities and Prevention Act) is old, some of the 'dangerous provisions' were introduced only later on.

Acts like TADA, POTA did not exist at that time. So, the courts dealing with the matters of personal liberty were not facing the problems created by such newly introduced legislation.

I would only comment, as an analyser of law, that there is no uniformity in the approach of the Supreme Court in such matters.

Like the delays, the lack of appropriate infrastructure, less number of judges, etc.

Sometimes the Bar also doesn't assist very much in deciding the matters; adjournments are taken, witnesses are reluctant to depose or come forward; these are all social evils and do not actually belong to the judiciary.

If the political executive doesn't want an independent judiciary, it will be impossible for the judiciary to maintain its independence.

Independence of the judiciary depends on the political executive, their will, their understanding and need felt by them to have an independent judiciary.

Can we then say that the independence of judiciary is a function of the whims and fancies of the political executive?

To a large extent, yes, because even if we speak of judicial independence, the political executive is all powerful and one can't under-estimate the executive.

The executive has the ways and means to punish the judges for the judgments which are disliked.

The real strength of the judiciary lies in the respect it commands in the public and it is only if the people have faith in the judiciary and respect for it, that the political executive would be deterred from interfering with the judiciary.

The judiciary does not have public support for whatever reason; many people do not understand judicial processes.

Now, I'm not of the view that there should not be any criticism of a judicial order; one would encourage criticism of judicial orders. But that criticism should be based on the legal soundness or otherwise of such orders. Unfortunately, that doesn't happen because of some perception issues.

People don't understand the legality or propriety of judicial orders. I am quite liberal when it comes to the criticism of Indian courts and judiciary. But the criticism should be based on the legal soundness of the order; but that doesn't always happen.

There can be different perceptions about an order even when it is perfectly legal, just and equitable. People may still criticise it because of their perceptions about what is just and legal. Sometimes, there is a motive to pressurise the judges in giving a particular judgment behind such criticism.

Through social media, and also mainstream media, a wave, a perception can be created falsely and if the decision of the courts is not as per the perception created in these spaces, then the decision is considered bad and the judges are criticised. Nobody tries to test or analyse the legality of a judgment.

The political executive will protect the judiciary if it fears that any interference in the dispensation of justice by the judiciary will be brought down by the people.

The political executive will intimidate the judiciary when it realises that society will not bother about independence of the judiciary and will not protest even if they meddle in judicial judgments.

To preserve their independence, the judiciary needs to be fearless.

In order to be fearless, they need a fearless environment, which is possible only if they believe that their rightful orders will be upheld in the right spirit; they will not be targeted.

If the judiciary and higher courts start worrying about the wave, the perceptions created on social media, or mainstream media, what happens to the dispensation of justice?

Yes, it will affect and is affecting the dispensation of justice. But the suggestion in your question that judges need not take all this into consideration needs to be further discussed.

The judiciary may not be directly affected by such wave/perception, but for the people who are against the judiciary generally or a particular judge, such artificially created waves give them a handle to target the judiciary and portray judges in bad light.

My views are quite straightforward on this and in my view it is the political executive that doesn't want an independent judiciary.

The judiciary cannot do much if there is no revolt by the people -- at least the members of the Bar -- against the interference of political executive in the independence of judiciary.

If you are from Maharashtra, you must have heard about Ram Shastri Prabhune. He is the role model of a judge, an epitome of fearless judiciary.

He was that fearless judge who sentenced the Peshwa to death. But while we remember this bold decision, we forget that his order was not only not executed, but the person whom he sentenced to death, actually became the Peshwa, and Ram Shastri had to lose his job.

His life was saved not because of any public support, but because of the internal rivalry and politics played by the Maratha sardars.

Ram Shastri is considered an extraordinary judge because he took the risk of losing his life to give what he believed to be a fair judgment in accordance with the ideals of law and justice.

Today, there may not be a danger to the lives of the judges who pronounce judgments disliked by the political executive, but they may face several other problems including the tarnishing of their image by a systematic campaign.

We cannot blame only the judges for such a situation, but also society. Of course, the judges must also take their share of blame, but basically the social milieu, the social conditioning, is what may be making them timid.

Again, the personality of a judge also matters. A timid person will not become fearless just because he is appointed as a judge. There are several judges who do not succumb to such pressures.

I have seen many judgments given by the courts at the lowest level without fearing for the consequences, and I sometimes wonder whether the decisions by some higher courts are given because of fear of consequences.