The man who will probe Ishrat Jahan encounter

Dr Satyapal Singh has been named as the chief of the Special Investigation Team that will probe the alleged encounter of Ishrat Jahan by the Gujarat police.

Ishrat Jahan, a college girl from Mumbra near Mumbai, was allegedly killed by the Gujarat police near Ahmedabad on June 2004.

An Indian Police Service officer of the 1980 batch assigned to Maharashtra state, Singh has earlier publicly advocated state violence in the larger interest of society.

"You cannot give lectures, sometime you have to use violence," Singh was quoted as saying in a 1995 interview to Rediff.com.

It was during Singh's tenure as joint commissioner of police (crime) of Mumbai in 2003 that the city witnessed the highest number of encounter killings. Mumbai police at that time boasted of encounter specialists like Pradeep Sharma, Vijay Salaskar, Sachin Waze, Daya Nayak and others.

But accused police officers in the Ishrat encounter should not get any ideas due to Singh's stance on encounter killings, feel sources in Mumbai police. According to them, though Singh was keen on eliminating criminals, he was against oppression of the innocents.

Singh is currently the additional director general in charge of establishments of the state police. Singh is considered to be a 'clean' official and managed not to court any controversy in his long career till he took over as police commissioner of Pune.
Minister of State for Home Ramesh Bagwe took umbrage when his passport was not renewed owing to the pending criminal cases.

As a police officer, Singh is known to go strictly by the book. He had to pay a price for that when he was abruptly transferred from the position of Pune police chief to head the establishments of state police department.

Before his posting in Pune, Singh had served as the Nagpur police commissioner for a period of 13 months.

Considering that the usual tenure of IPS officers is two years or more, Singh's stint as Nagpur police chief was certainly short.

During his Nagpur stint, Singh had cracked down on matka gambling and strictly enforced the rule of wearing helmets for riders in the city.

Singh hails from Basauli in Meerut district of Uttar Pradesh. He was always a topper in his class and his parents wanted him to join the civil services. After completing his Msc in Chemistry from Meerut University, Singh opted for the IPS. He considers himself a very spiritual and religious person.

Before joining the forces, he had seriously considered representing India in the World Religion Conference like his idol Swami Vivekananda.

After joining the police service, Singh completed his thesis in public administration from Nagpur University. 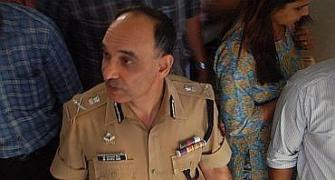