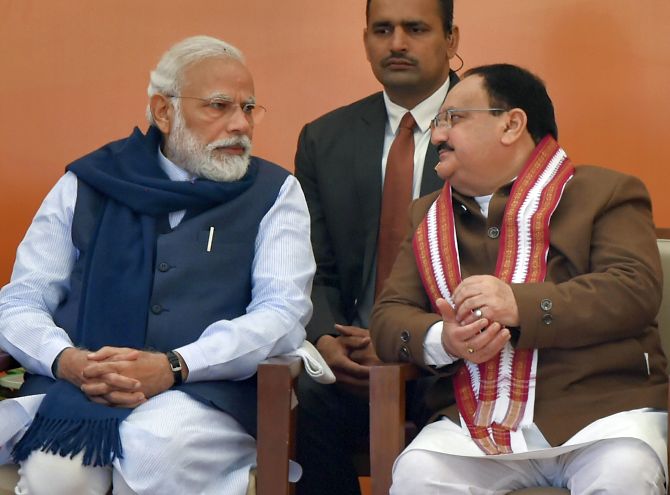 Soft-spoken, affable and low-key, the newly elected Bharatiya Janata Party president Jagat Prasad Nadda is a quintessential organisation man who is expected to consolidate the rapid gains the party has made under his predecessor Amit Shah.

He takes over at a time when the BJP is witnessing vigorous challenge from a united opposition in assembly elections amid signs that it needs to rejig its electoral strategy following a string of losses in state polls.

If a relatively inexperienced Shah in 2014 was seen as Prime Minister Narendra Modi's handpicked man to shake up the saffron organisation by easing out veterans and infusing young blood to galvanise party cadres and fuel its expansion drive, Nadda is considered a seasoned hand who will build on these gains without causing too many disruptions.

His immediate challenge is the February 8 Delhi assembly polls where the BJP is locked in a tough fight with the Aam Aadmi Party, followed by year-end elections in Bihar.

However, his big test would be the next year's assembly polls in West Bengal, a state where the BJP has never tasted power but has emerged as a strong challenger to Mamata Banerjee-headed Trinamool Congress.

Despite its overwhelming win in the 2019 Lok Sabha polls, the BJP has suffered several defeats in state polls since 2018 and its governments have been unable to come to power, except in Haryana where it had to join hands with Jannayak Janata Party to form government.

The 59-year-old Nadda, who holds a degree in law, brings decades of experience during which he served at key party posts, headed its election campaign in a host of states -- from Bihar to Uttar Pradesh, Kerala, Maharashtra and Punjab among others -- and also worked as a minister in BJP governments in his home state of Himachal Pradesh.

He was also a Cabinet minister in the first Modi government.

The Brahmin leader is considered within the party an epitome of political correctness with his manners unfailingly polite in public and his attacks on rivals never triggering any unseemly controversy.

However, party insiders say Nadda can be very firm in his handling of organisational affairs and electoral challenges but makes it a point to not make any public fuss about them.

He is also a man of detail as party leaders recall that he spent months in Uttar Pradesh, a state he was made in-charge of during the 2019 Lok Sabha polls, meeting every religious leader of consequence and holding long meetings with party leaders and allies to take on the formidable challenge posed by the Samajwadi Party-Bahujan Samaj Party alliance.

Nadda hails from Himachal Pradesh but was born and raised in Bihar where his father was a professor in Patna University.

He joined the Akhil Bharatiya Vidyarthi Parishd, the Rashtriya Swayamsevak Sangh's student wing, there and was active in the anti-Emergency stir headed, his colleagues say.

On his return to his home state, he was elected as student union president of the Himachal University.

It was a sign of the trust he always had of the party leadership that he became the leader of the opposition in Himachal in 1993 after being elected an MLA for the first time.

When the BJP stormed to power in 1998 in the state, he became a minister. He was a minister again in 2010 when he resigned to become the party's national general secretary when Nitin Gadkari was its president.

He enjoyed warm relations with Prime Minister Narendra Modi as the latter was for long incharge of the party's affairs in Himachal.

Nadda was elected to Rajya Sabha in 2012 and made a member of the party's parliamentary board in 2014 when Shah took over as its president.

His steady rise through the organisation continued when Modi and Shah chose him to be its working president last year.