A group of 40 women rights activists has opposed the Muslim Women (Protection of Rights on Marriage) Bill, 2018, in its present form, raising concerns over 10 points in the Bill which was passed by the Lok Sabha on Thursday.

In a statement, they urged the government to withdraw the Bill from consideration in the Rajya Sabha, and review the fundamental flaws pending broad-based community consultations.

Following are the 10 concerns raised by the activists.

1. This Bill disregards the fact that its very objective -- to protect the rights of married Muslim women and prohibit divorce by pronouncing 'talaq' by their husband -- has already been achieved by the judgment of the Supreme Court.

3. There is no rationale to criminalise the practice of talaq-e-biddat and imprison Muslim men. The effect of the Supreme Court's judgment is that the marriage is legally valid and the persons continue to be lawfully wedded.

Now, the Muslim men will be incarcerated, thus violating the rights of conjugality of these two persons.

Criminalising the husband would also lead to unwanted separation between the couple, against the wishes of the wife.

4. Since Muslim marriage is a civil contract between two adult persons, the procedures to be followed on its breakdown should also be of civil nature.

Penal action to discourage the practice of instant triple talaq is a myopic view as it leaves many other issues of economic and social security of women unaddressed.

5. The government should strengthen the negotiating capacities of women by providing them economic and socio-legal support rather than criminalising the pronouncement of triple talaq.

6. The pronouncement of triple talaq having no legal consequences on the marriage means that such a proclamation by a Muslim man is essentially a desertion of the wife.

In any of the Personal Laws, the desertion of wife by a man is not a criminal offence. Therefore, while the Bill aims to criminalise the pronouncement of talaq, in effect, it is only criminalising the act of desertion of a Muslim wife by her husband.

Criminalising desertion by Muslim men, which constitutes only a civil offence for men of all other religions, is discriminatory under the Constitution.

7. If there is violence within the marriage in addition to the pronouncement of triple talaq, the woman could use the existing provisions of the Protection of Women from Domestic Violence Act, 2005 and Section 498A of the Indian Penal Code.

These two laws, taken together, represent a wide spectrum of legal options available for women survivors of domestic violence, encompassing both criminal and civil provisions.

8. No economic and socio-legal support is provided by the government in the Bill to women, children and other dependents, when the erring men are put behind bars.

The Domestic Violence Act, 2005 under Section 21 already provides for the aggrieved woman to be provided custody of the child and Section 20 provides for maintenance to be paid to her.

Section 125 of the Code of Criminal Procedure, 1973 also provides for maintenance for the aggrieved woman.

9. The Bill allows for the aggrieved woman as well as anyone related to her by blood or marriage to be the complainant.

There is no provision for a relative to seek the consent of an aggrieved woman before filing a complaint.

The problem becomes particularly acute in the case of inter-religious marriages of Muslim men with a woman of another religion.

10. The terms of imprisonment up to three years is arbitrary and excessive. Serious crimes like Causing death by rash or negligent act (IPC Sec 304A), Rioting (IPC Sec 147), Injuring or defiling place of worship with intent to insult the religion of any class (IPC Sec 295) -- all punishable by two years in jail or fine or both.

All these criminal acts have lesser punishment than pronouncing triple talaq, which is arbitrary and excessive, and violative of Article 14 of the Constitution.

The Lok Sabha on Thursday passed the Bill which criminalises the practice of instant triple talaq, with the government rejecting the contention that it was aimed at targeting a particular community.

The Muslim Women (Protection of Rights on Marriage) Bill, 2018 was passed by the Lower House with 245 voting in favour and 11 opposing the legislation. 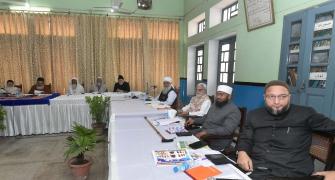