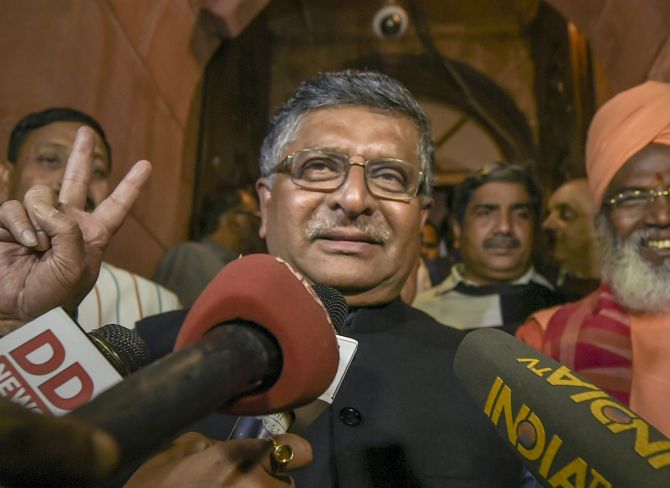 IMAGE: Union Law Minister Ravi Shankar Prasad flashes the victory sign as he comes out of the Parliament House after triple talaq bill was passed in Lok Sabha during the Winter Session, in New Delhi, on Thursday. Photograph: Vijay Verma/PTI Photo

Second time in less than one year, the contentious triple talaq bill criminalising instant divorce by Muslim men was passed by Lok Sabha after a heated debate on Thursday, with the government projecting it as a matter of 'Insaaniyat aur insaaf' for Muslim women, and rejecting the contention that it was aimed at targeting a particular community.

The Opposition, including the Congress, objected to many of its provisions as 'unconstitutional' and claimed that its real purpose was not to empower Muslim women but to penalise Muslim men, as it demanded the revised legislation to be sent to a joint select committee of Parliament for greater scrutiny.

With the government rejecting their demand, the bill was put to vote and passed after an over five-hour debate with 245 members voting in its favour and 11 against it.

Prime Minister Narendra Modi was not present during the debate.

The Muslim Women (Protection of Rights on Marriage) Bill was passed by LS in December 28 last year but got stuck in the Upper House amid protest by opposition parties.

The government had then cleared some amendments, including introduction of a provision of bail, to make it more acceptable.

However, as the bill continued to face resistance in the Rajya Sabha, the government issued an ordinance in September, incorporating the amendments.

The fresh Bill to make the practice of triple talaq among Muslims a penal offence was introduced in Lok Sabha on December 17 to replace the ordinance.

Under the proposed law, giving instant triple talaq will be illegal and void, and will attract a jail term of three years for the husband.

Key opposition parties, including the Congress and Trinamool Congress as also All India Anna Dravida Munnetra Kazhagam, which has often been an ally of the government in Parliament, staged a walkout soon after Law Minister Ravi Shankar Prasad concluded his reply.

The Bharatiya Janata Party is set to use Thursday's passage of the bill as a major talking point ahead of the 2019 Lok Sabha polls.

The saffron party and its ideological affiliates, including the Rashtriya Swayamsevak Sangh, have long railed against the practice of instant divorce, projecting it as an evidence of its Congress-led 'secular' rivals' vote bank politics.

However, the bill's fate remains uncertain as it will now go to Rajya Sabha, where the government lacks numbers and it cannot become a law unless passed by both Houses.

Piloting the bill, Prasad rejected the contention of some opposition members that it was aimed at targeting any community. It is about 'insaaniyat aur insaaf' (humanity and justice), he said, adding that it should not be weighed on the scales of politics.

Over 20 Islamic countries have also barred the practice, he said, adding that over 477 cases of triple talaq have been reported since January 2017. It has continued despite the Supreme Court declaring the practise 'unconstitutional', he added.

Leader of Congress Party in Lok Sabha, Mallikarjun Kharge said the bill was against the spirit of the Constitution and has violated several articles dealing with the rights of individuals.

Congress MP Sushmita Dev said the real purpose of the bill was not to empower Muslim women but to 'penalise' Muslim men.

Demanding that the bill be referred to the Parliamentary panel, Dev said criminalisation of triple talaq goes against the Supreme Court verdict. 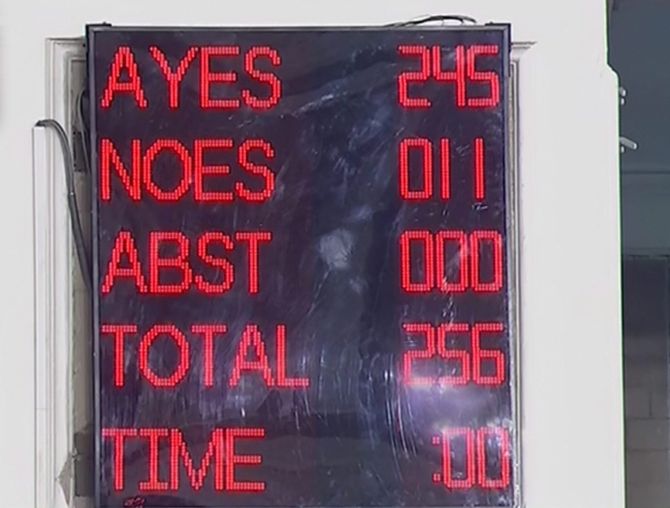 IMAGE: Vote counts displayed on an LED screen after the debate at the Lok Sabha. Photograph: LSTV Grab via PTI

Prasad said the bill has made the offence compoundable, meaning that the case can be withdrawn if the man and his estranged wife reach a compromise, and that only the wife and her close relatives can file an FIR, ruling out the law's misuse.

Union minister Smriti Irani said if Parliament can enact laws to ban dowry and the practice of sati, it can also approve the bill to ban instant triple talaq.

Supporting the penal provisions in the bill, Union Minister Mukhtar Abbas Naqvi said it was important to instil fear in the minds of those still practising it and rejected suggestions that it was against any religion.

Several women activists criticised the passage of the bill, saying it was a 'political move' aimed at polarising the country before the 2019 general polls.

Secretary, All India Progressive Women's Association (AIPWA), Kavita Krishnan said, "Why such an offence (abandoning wives) when committed by a non-Muslim man is considered to be a civil offence and the same is being criminalised when committed by a Muslim man?" she asked.

"I think the fundamental objection that my organisation, AIPWA, and other women groups had on this bill stands. We had objected to the offence of instant triple talaq being criminalised. Our position is that there is no basis to make this a criminal offence," Krishnan said.

However, the passage of the bill drew mixed reactions from Muslim bodies with some terming it 'very dangerous', while others welcoming it.

While S Q R Ilayas, member of working committee of the All India Muslim Personal Law Board, termed the bill as 'dangerous' and said it has been brought keeping in mind the Lok Sabha elections, Maulana Mahmood Daryabadi, General Secretary of the All India Ulema Council, said when the Supreme Court has declared triple talaq unconstitutional, why is it even being discussed.