News
Business
Movies
Sports
Cricket
Get Ahead
Money Tips
Shopping
Sign in  |  Create a Rediffmail account
Rediff.com  » News » You don't need to go back to Delhi: Tejashwi to migrant whose photo went viral

You don't need to go back to Delhi: Tejashwi to migrant whose photo went viral

Rashtriya Janata Dal leader Tejashwi Yadav Monday offered economic rehabilitation to a labourer from Bihar whose photograph clicked recently in Delhi became emblematic of the massive migrant crisis that followed the nationwide lockdown to prevent the spread of COVID-19.

Yadav, who is the leader of the opposition in the state Assembly, interacted with Rampukar Pandit, who has since returned to his home in Begusarai district, via video conference.

The RJD leader was moved by the latter's tale of grief and loss and made his photo the profile picture on his official Twitter handle. He also shared the footage of his interaction with the hapless man.

The photo shows the migrant worker seated on the roadside, his face contorted in pain on hearing the news of his terminally ill son on his mobile phone.

"I am instructing our district president Mohit Yadav to immediately provide you with monetary assistance of Rs one lakh. Remain in touch with him and let us know if you face any other problem. "I also promise you to get a job once the lockdown is over," Yadav said.

The RJD leader, who has been named his party's chief ministerial candidate for the assembly polls in Bihar due later this year, said that "since we (RJD) are not in power we cannot help you to get a government job". But he gave Pandit the assurance of employment in the "private sector" in any place he chooses -- "Patna or Begusarai".

"You do not need to go back to Delhi, far away from your family, again," said Yadav as Pandit narrated the story of his arduous journey and his inability to reach home before his child, who was less than one year old, breathed his last.

"You are not alone in your grief. You have come to symbolise our fight for the rights of migrants. We will keep showing your image to the government to jolt it out of deep slumber," said the RJD leader, who has been accusing the Nitish Kumar government of indifference towards the plight of migrants.

Pandit's plight was captured by the lens of a PTI photojournalist who also offered the construction worker, dejected at the shabby treatment by policemen patrolling roads, a ride in his car which the men in uniform thwarted over lockdown restrictions.

A woman provided Pandit with food and some money and helped him get a ticket for a 'Shramik Special' train for the journey back home. His son had died by that time.

The issue of migrants who have been returning to Bihar in large numbers, many of them contributing to the spike in the states COVID-19 figures, has become a thorny one in the state as the government had initially expressed its opposition to their travel on a large scale, saying that it would defeat the "very purpose of the lockdown".

Kumar's alliance partner BJP adopted a dissimilar stance on the issue. States like UP and Gujarat, ruled by the saffron party, went ahead with ferrying a large number of buses for bringing back migrant workers, students and pilgrims from far off places.

Bihar BJP president Sanjay Jaiswal also came out with frequent statements attacking the state government for not doing enough for its migrant workers and students trapped in places like Kota.

After dragging its feet for a while on the plea that it did not have adequate number of buses to follow the example of other states, the Bihar government relented when the Centre agreed to run special trains to the state.

In a virtual reversal of stand, the government has of late been seeking running of as many trains as possible, besides plying of hired buses and other road vehicles to complete the process of return of migrants at the earliest. We poor will just die, says migrant in viral image 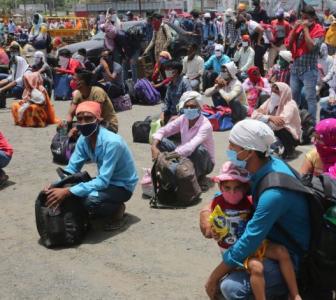 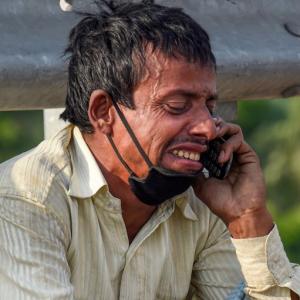