After a long and arduous journey from Delhi to Bihar, migrant labourer Rampukar Pandit has finally reached home and is reunited with his grieving family, getting the much-needed catharsis he had been desperate for. IMAGE: Rampukar Pandit, a migrant, weeps inconsolably while talking to a relative over his mobile phone at Nizamuddin Bridge, in New Delhi. Photograph: Atul Yadav/PTI Photo

The 38-year-old, whose mournful face became emblematic of the hardships being faced by poor migrant workers during the lockdown, was discharged from a block hospital on Monday evening and then ferried home, about 12 km away, on a bicycle by a family member.

"My test (for coronavirus) came out negative and I was told I could go home but only if someone from my family could accompany me. So, I called my wife. Since no means of conveyance was available, she left home on foot for the Khodawandpur block hospital," he told PTI on Tuesday.

Rampukar's wife Bimal Devi had walked about 3-4 km towards the hospital on Monday when their young distant nephew, on his way to buy ration on a bicycle, saw her and instead of going to a shop offered her a ride to the hospital, Rampukar said.

"My nephew, who is about 15 years old, called up another relative who also reached the hospital riding a bicycle. After being discharged in the evening, my wife sat on the back of the nephew's bicycle and I on the back of my cousin's bicycle, and it took us about 1.5 hours to reach home," he said.

Asked if they had sought a vehicle from the block hospital, Rampukar said, "We asked only once. Since no vehicle was available for us, we decided to leave on our own. I wanted to see my daughters."

There was no immediate reaction from the Begusarai district administration on the incident.

Once he reached home, he said his three daughters "leapt to me and we all cried together. This is for the first time I met my entire family after my son died a few days ago".

On Saturday, his wife and nine-year-old daughter Poonam had met him in the hospital for 10 minutes, but from a distance.

Rampukar's distraught face -- when he had learned about the serious condition of his one-year-old son and wept uncontrollably on the Nizamuddin Bridge in Delhi where he was stuck for three days over a week ago -- has became a snapshot of India's migrant tragedy amid the ongoing lockdown.

His picture, by PTI photographer Atul Yadav, touched a chord in the hearts of millions of people across the country.

After PTI put out his pictures and subsequently his story, many people have been taking to social media offering to help him.

Rampukar's son later died and the family could not perform their child's last rites.

"I have not been able to perform last rites of my son. Even my wife could not do it. 'Nadi mey bacche ki body ko baha diya' (The child's body was put in the Boorhi Gandak river)," he lamented.

While Rampukar has finally reached home, his family's ordeal is far from over. With no means of earning a living, the family that lives a hand-to-mouth existence is worried about how they will make ends meet.

His wife Bimal Devi said a man had come to their home from Khagaria a few days ago after seeing Rampukar's photo and getting to know of his plight through newspapers.

"He gave us some stock of rice, dal, spices and went away. Now, we have ration left for cooking just two meals. My children and family will starve if not helped," Devi said as she broke down when PTI spoke to her on the phone.
Rampukar says ever since his father-in-law died, his wife and children have been living with her ailing mother while he toiled as a construction labourer in Delhi to eke out a livelihood. His last job was at a construction site of a cinema hall in Delhi.
He was eventually helped by a woman who have him food, Rs 5,500 and also booked his train ticket from Delhi to Begusarai.
He reached Begusarai on the night of March 15 and after initial screening was sent to a quarantine centre in a school on the outskirts of the district headquarters.
On Sunday, he said, officials had taken him to Khodawandpur block hospital where a COVID-19 test was conducted on him. The test result later came out as negative. PTI KND 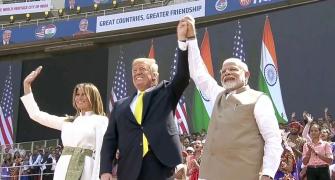 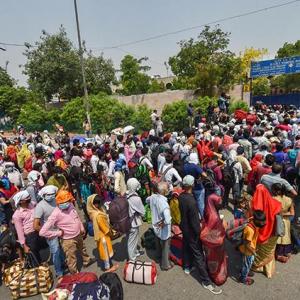