News
Business
Movies
Sports
Cricket
Get Ahead
Money Tips
Shopping
Sign in  |  Create a Rediffmail account
Rediff.com  » News » Talks with Pak will not be fruitful: BJP

Talks with Pak will not be fruitful: BJP

The BJP on Wednesday said India's talks with Pakistan would prove fruitless as long as actors like ISI and the army in the neighbouring country continued to sponsor and abet terror against it.

"The situation that has developed recently in Indo-Pak talks prove BJP's contention that their ISI and army are involved in this state-sponsored terrorism... The Pakistan government is working under ISI and army's pressure," BJP spokesperson Shahnawaz Hussain said.

He maintained that talks between the two countries cannot be held if terrorism is set aside from the agenda.

"Atal Bihari Vajpayee had said that talks should be held with humanity. State-sponsored terrorism should end. Else talks will be fruitless," Hussain said.

Defending the failure of Agra summit and Lahore bus diplomacy during the NDA regime, Hussain said they did not succeed as the then BJP-led government emphasised that terrorism was the main issue.

The BJP spokesperson argued that the recent statements of Home Secretary G K Pillai and National Security Advisor Shiv Shankar Menon, as well as confessions of Pakistani-American LeT member David Coleman Headley only reiterate what his party has been saying all along about involvement of Pakistan state actors in terrorism against India.

He said the Pakistan government should take Headley's statements seriously.

"The Pakistan agencies are in the know of all terrorist attacks against India... What India said in Afghanistan yesterday, it should have stated in Pakistan (during External Affairs Minister S M Krishna's visit)," Hussain said.

External Affairs Minister S M Krishna yesterday told Pakistan to take "seriously" the revelations made by Headley on the Mumbai attacks and not "push them under the carpet".

Headley had told Indian investigators in Chicago that the ISI was involved in the planning of the 26/11 attacks from "beginning to the end".

Hussain also said Pakistan was also getting exposed in Kashmir where it was "sponsoring the separatists". 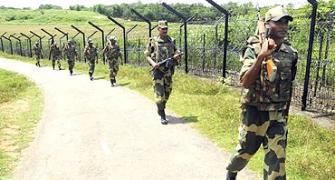 The deal that saved Headley's life