The second Pinarayi Vijayan government in Kerala, to be sworn in on May 20, will have a 21-member cabinet, Left Democratic Front convenor and Communist Party of India-Marxist acting state secretary A Vijayaraghavan said Thiruvananthapuram on Monday. He added that the swearing-in ceremony will be conducted on May 20 with a limited number of people in view of the COVID-19 situation in the state.

The oath-taking ceremony of the new Left government would be a low-key affair with limited invitees in view of the COVID-19 situation, he said in Thiruvananthapuram after the crucial state committee meeting of the Left Democratic Front.

He also said the portfolios of the ministers would be decided by the chief minister.

"As the LDF has received immense support from every section of people during the Assembly elections, we want to form a government which has the representation of all sections that can rise to the expectations of everyone," Vijayaraghavan told reporters in Thiruvananthapuram.

"As of now, the decision is taken to form a 21-member government,"the CPI-M leader said.

The CPI-M, the largest coalition partner, in LDF would have 12 members in the new cabinet while Communist Party of India, the second largest party, would have 4 nominees while Kerala Congress (M), Janata Dal-Secular and Nationalist Congress Party would have one representative each, he said.

As there are restrictions to accommodate more than 21 members in the cabinet, the LDF decided to share the ministerial berths to four of its allies, having a single MLA, on a term basis, he said.

With this, it has become clear that Antony Raju, (Janadhipathya Kerala Congress), K B Ganesh Kumar (Kerala Congress-B), Ahammad Devarkovil (Indian National League) and Ramachandran Kadannappally (Congress-S) would be inducted into the cabinet in two phases.

While the CPI-M and CPI would hold the speaker and deputy speaker posts respectively, the Chief Whip post would go to a KC-M nominee.

The LDF parliamentary party leader would be elected on Tuesday after which the Governor would be consulted with regard to the swearing-in ceremony, he added.

Earlier, Vijayan, who chaired the LDF state committee meeting at the CPI-M headquarters AKG Centre in Thiruvananthapuram, cut a cake in the presence of front leaders to celebrate their historic victory in the April 6 Assembly polls.

While UDF could manage only 41 seats, the saffron front failed to win any seat in the polls. 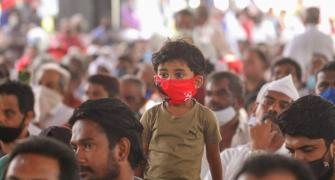