However, Hargovind Bhargav told PTI that he was not present at the meeting. "I was in Sidhauli (his Assembly constituency) and did not go there. I also saw my name being flashed on news channels," he said.

Meanwhile, Shushma Patel said she has decided to join the SP.

But Bhinga MLA Aslam Raini told PTI they can form a party or join an outfit without attracting provisions of the Anti-Defection Law only if their number reaches 12, the two-third of the current strength of the BSP in the 403-member state Assembly.

Currently, our number is 11, said Raini.

"As of now, if we go to any party or take the membership of any political party, our membership of the UP Legislative Assembly will cease to exist under the Anti-Defection law. We need at least two-third number of the total BSP MLAs to avoid Anti-Defection Law," Raini said, adding that one more MLA may join them soon.

"Ex-speaker Sukhdev Rajbhar can be the 12th MLA," he said.

Once the political party is formed, senior leader Lalji Verma will tell you, he said.

Raini told reporters that he is not angry with BSP chief Mayawati.

"Whatever SC Mishra tells Behenji, she acts as per it. The intention of SC Mishra is to completely destroy the BSP and only after that he will feel relieved," he alleged.

Meanwhile, reports surfaced that Raini met UP Assembly Speaker Hriday Narayan Dixit. Dixit denied it. "No, he did not come," Dixit told PTI.

When asked what prompted the suspended BSP MLAs to meet Yadav, Patel said, "We were suspended in October 2020 during the Rajya Sabha elections and were categorically told not to use the BSP flag and banner, and also not to attend any party meeting."

"Now, we have to look for alternatives. So, in this context, we had called upon Akhilesh Yadav," she said, adding that now she has nothing to do with the BSP.

But Mujtaba Siddiqui said if Mayawati decides to withdraw their suspension, they may think of rejoining the party.

"As far as the meeting with Akhilesh Yadav is concerned, it was a courtesy call and there was no discussion on elections or tickets," he said.

In October 2020, seven BSP MLAs were suspended by party president Mayawati. Apart from the six MLAs whose name cropped up with regard to the meeting with the SP chief, Vandana Singh was the seventh legislator.

Aslam Raini praised the BJP by reciting the Hanuman Chalisa in the UP Assembly and now he met the SP chief, who opposes the BJP, he told reporters in Ballia.

"Efforts are being made to induct them into the SP. This has exposed the dual face of Akhilesh Yadav," he added.

Singh said people will teach a lesson to the rebel BSP MLAs. 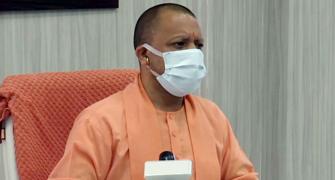 BJP quells rumours of change in UP, backs Adityanath