'Emboldened by the BJP victory, the upper castes feel they must assert themselves and regain dominance over the rural power structure.' 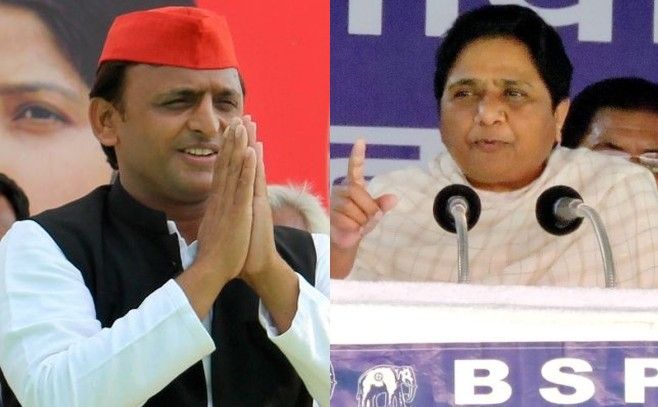 Realpolitik can make political parties do the unthinkable, and that is what the BJP has forced upon the two arch rivals of UP politics.

The coming together of Mayawati and Akhilesh Yadav for the March 11 by-election in Uttar Pradesh marks a big shift in the politics of the Bahujan Samaj Party and Samajwadi Party, two bitter enemies in UP politics.

Twenty-three years after the BSP-SP alliance ended bitterly, the two parties have come together to counter the BJP in the Lok Sabha by-election in Gorakhpur and Phulpur.

The Gorakhpur seat was represented by UP Chief Minister Yogi Adityanath from 1998 to 2017.

Phulpur, represented once by Jawaharlal Nehru, was won by Keshav Prasad Maurya, now UP's deputy CM by a record margin in 2014.

"Akhilesh and Mayawati head major parties and will have to play a lead role in collecting all the anti-BJP forces," Dr Prashant Trivedi of the Lucknow-based Giri Institute of Social Studies, tells Rediff.com's Archana Masih.

"I expect Akhilesh to take the major lead in forming an organic coalition. However authoritarian and temperamental Mayawati may be, she has to mend her ways and that's why they are coming together."

Considering the bitter history the BSP and SP share (including the infamous 1995 attack in a Lucknow guesthouse where SP goons allegedly targeted Mayawati), what compulsions have brought these arch rivals together?

The compulsions began from the last assembly election in UP.

The BJP had fought the election on the slogan of non Yadav OBCs (Other Backward Classes) and non Jatav SCs (Scheduled Castes).

The end result was that neither the non Yadav OBCs nor the non Jatav SCs gained, the entire gain went to the so-called upper castes.

The representation of the upper castes in the UP assembly is at a record high. It is unprecedented in the last 20 or 30 years.

This also reflects in the construct of the present government, the choice of ministers, appointments of officers and the policies of the government.

OBCs and SCs are marginalised from the UP government after an election which was fought in their name,

What changes on the ground forced these leaders to take this step?

There has been pressure from the grassroot; cases of atrocities against Dalits have taken place which has put pressure on the BSP leadership.

This pressure from below has made these leaders realise that they should combine to counter the hegemony of the upper castes which is reflected in the politics of the BJP.

It is not only about MLAs/MPs and government, it is also about everyday life.

Life in the rural areas has changed after the BJP came to power.

OBCs and SCs used to have some say in the grassroot, rural, politics during the BSP or SP governments. Now they are being pressurised by the so-called upper castes.

Emboldened by the BJP victory, the upper castes feel that since they have come to power after a long time, they must assert themselves and regain dominance over the rural power structure.

This is reflected all over, but I am not sure if this is being conveyed by the media.

The BSP-SP leadership is facing pressure from its people below to combine and counter the BJP's hegemony.

It proves that there are no permanent enemies in politics, but it is not going to be an easy coalition, is it?

The SP-BSP are coming together with a lot of precaution.

The two parties have been rivals and because of the different agrarian relationships, BSP and SP supporters haven't had good relations. There have been plenty of clashes between OBCs and SCs.

These parties will have to overcome these challenges. The threat of upper caste dominance being felt by its cadres has brought these two coalitions together.

It is not only the coming together of two political parties, but two large coalitions going to the village, mohalla, taluka levels. The existing situation is ripe for that.

What in the current political situation makes this an opportune time for the SP-BSP to come together?

There are similarities with the post-1992 Babri Masjid demolition situation.

The same kind of situation is prevailing in UP today -- the sort of aggressive Hindutva mobilisation.

So the environment is very similar to 1993 when the two coalitions came together.

That's why they are negotiating a path together, a lot of bargaining will take place. Slowly and steadily they are proceeding in that direction.

It is not just about two religious communities, it is also about the hegemony of the upper caste in the everyday life of Dalits and OBCs.

Does this show a shift in Mayawati's politics? She has been pushed to the wall after being reduced to just 19 seats in the UP assembly.

Mayawati is responding to the prevailing situation. She has nominated a BSP cadre to the Rajya Sabha when all were expecting she would nominate herself.

This conveys the message that the cadre of the party will be given due recognition.

She has taken a very intelligent step by nominating another person. This will give her time to build and rectify her image and organisation.

If she corrects her past mistakes, becomes accessible, interacts with her cadres, it won't be difficult for her to win back her constituency.

In this kind of political situation her constituency is also facing an existential threat because Muslims and Dalits are at the receiving end.

How has SP politics changed after its defeat a year ago?

It is playing the lead role among political parties against the BJP in these by-polls.

The SP has to play an effective Opposition. As of now, I am disappointed with the SP as the Opposition party.

It is almost a year since the new government was formed and there has hardly been any struggle on the street which was a characteristic of the SP.

SP cadres used to take to the streets and come out against government policies, whichever government it was.

Under Akhilesh, they have not taken the position they should have.

Akhilesh should learn how to do Opposition politics from his father. Mulayam Singh Yadav had a long innings as Opposition leader in UP before he became chief minister.

What kind of partners will these two diverse leaders espousing diverse politics make?

In the last election when the Congress and SP formed a coalition there were differences and a sense of one upmanship.

The Congress would have advised Rahul against sharing the dais with a state leader, but in finality Akhilesh and Rahul (Gandhi) acted maturely, and things didn't become public.

I expect Akhilesh to take the major lead in forming an organic coalition. However authoritarian and temperamental Mayawati may be, she has to mend her ways and that's why they are coming together.

They both head major parties and will have to play a lead role in collecting all the anti-BJP forces.

Akhilesh may have other weaknesses, but he is good at taking people along.

Will this cooperation extend to the Lok Sabha election?

There are two currents and counter currents running in Indian politics of our time.

One, people are facing economic hardships across India post demonetisation and GST.

Even hardcore BJP supporters, small and informal traders, are facing acute economic hardship, but at the same time in election after election they are voting for the same political party.

This is happening because the BJP and RSS propaganda machinery has somehow presented Hindu nationalism as real nationalism.

Indian nationalism that had united India for the last 70 years has been replaced by Hindu nationalism, led by the upper castes or Manuwadi ideology.

These two currents are running across each other. Governance and election results are totally separated at this point.