IMAGE: A Sukhoi 30 fighter jet of the Indian Air Force crashes minutes after taking off from IAS Tezpur base in Assam, on Thursday. Photograph: PTI Photo

A Sukhoi fighter jet of the Indian Air Force crashed in a paddy field near Tezpur in Assam on Thursday evening, a defence spokesperson said.

Both pilots of the aircraft ejected safely and have been rescued, defence spokesperson Lt Col Harsh Wardhan Pande said.

One of the pilots suffered injury in his leg, he said.

The Su-30 MKI fighter jet was on a routine training mission when it crashed in the paddy field in the Milanpur area and burst into flames at around 8:30 pm, Lt Col Pande told PTI.

The crash caused no damage to public property, he added.

Local people rushed the two pilots to the Army Base Hospital in Tezpur, he said.

Fire tenders rushed to the spot to bring the flames under control, the fire department said.

A Court of Inquiry has been ordered to ascertain the cause of the accident, official sources said in Delhi. 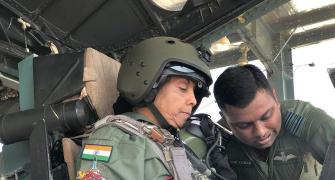 Strapped in G-suit, Sitharaman takes to the skies in Sukhoi 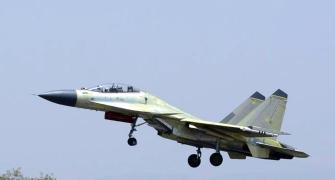 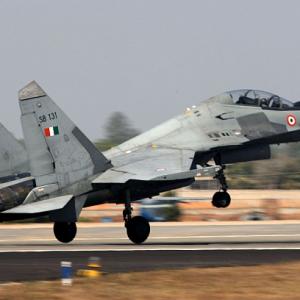