Shiromani Akali Dal chief Sukhbir Singh Badal's bullet-proof car was damaged and four people were injured in a clash between Congress and Akali workers during the filing of nomination papers for the Jalalabad municipal polls in Fazilka on Tuesday, officials said. IMAGE: SAD president and former Punjab Deputy Chief Minister Sukhbir Singh Badal sitting on a dharna along with Akali supporters after a clash, at the tehsil office in Jalalabad, on Tuesday. Photograph: PTI Photo

Badal, who has the Z-plus security cover, escaped unhurt in the violence, they said.

The Ferozepur MP had gone to the Jalalabad administrative complex during the filing of nomination forms by his party candidates for the municipal polls.

The two groups got engaged in a verbal spat and the Congress workers 'gheroed' Badal's vehicle, triggering a violent clash during which the two groups pelted each other with stones, police said, adding some gunshots were fired but it is yet to be ascertained who fired them.

The two groups also attacked each other with sticks, police said, adding several vehicles, including Sukhbir's SUV, were damaged.
Videos of stone-pelting on Sukhbir's car went viral on social media.

Police lathi-charged the mob to disperse it.

MLA Raminder Awla accused SAD supporters of initiating the clash by breaking down the barricades.

On the other hand, Badal alleged that Awla was behind the violence. Badal said being a Member of Parliament from the area, he had gone there to boost the morale of his party candidates but the Congress workers attacked his car besides injuring three Akali workers.

The SSP said a first information report has been lodged against over 50 unknown people under Section 307 (attempt to murder) of the Indian Penal Code and the Arms Act.

Later addressing SAD workers, Badal lashed out at the local Congress MLA as well as police. He sat on a 'dharna' at Shaheed Udham Singh Chowk, demanding the registration of a case against the 'guilty'.

'What more proof is reqd of lawlessness in Pb under @capt_amarinder's farmhouse governance. He has no moral right to continue as CM.'

The SAD demanded Chief Minister Amarinder Singh's resignation over the alleged breakdown of law and order.

In a statement, SAD spokesman Daljit Singh Cheema said, 'It seems there was a premeditated attempt on the SAD president's life and the Jalalabad police was complicit in this crime as it allowed attackers a free run.'

He demanded a high-level judicial inquiry under the supervision of the Chief Justice of the Punjab and Haryana high court.

Asserting that democracy was being 'murdered' in the state, Cheema said the chief minister had lost the moral right to continue in his post.

"He should put in his papers immediately," the SAD leader asserted, accusing CM Amarinder Singh of being directly responsible for disturbing the peace and communal harmony of the state.

Elections to eight municipal corporations and 109 municipal councils and nagar panchayats in Punjab will be held on February 14.

Cheema claimed it was clear now that free and fair elections could not be held to the municipal bodies under these circumstances.

"The State Election Commission has also utterly failed to rein in rogue Congress elements. The SAD demands immediate deployment of paramilitary forces in the state as the Punjab police could not be trusted to do its duty.

"The Ferozepur SSP and all other police officials complicit in this crime should also be proceeded against immediately," Cheema added. 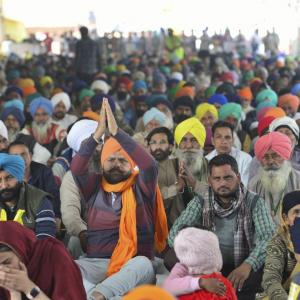