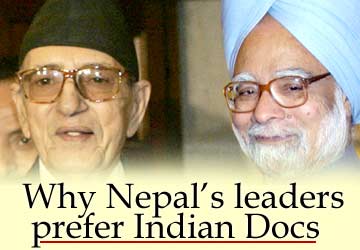 New Delhi has suddenly emerged as a political and medical hub not just for Nepal's politicians, but also underground and 'Interpol Red-Cornered' Maoist leaders and emissaries, who finally appear keen on working together with the politicians.

Another former prime minister Surya Bahadur Thapa is expected on June 24 on a mission similar to Koirala's. A heart patient, Thapa -- besides meeting doctors -- will also seize the opportunity to meet with political leaders, including Sonia Gandhi and Dr Singh.

Both leaders were welcomed and escorted by the exiled leaders of different Nepali political parties.

'Now it has become very clear that there is no military solution to the conflict in Nepal,' Koirala -- who leads a new seven-party alliance-- told reporters before leaving for Kathmandu.

'Even the Indian leaders have realised the fact that the Maoists are a political force. And this problem can only be resolved politically.' Hence, they 'urged me to take the lead' in initiating the process of reconciliation between the parties and the Maoists, and possibly the monarchy as well, he said.

India's U-turn for a despot

Sources said Koirala also had a 'backchannel dialogue' with Maoist emissaries during his Delhi trip.

In Kathmandu, Koirala had made a clarion call to the rebels to work together with the democratic alliance 'for a new constitution, for new Nepal.'

'Our party has taken positively the call made by the seven-party alliance to restore peace and establish complete democracy,' Prachanda said in a statement this month.

'The party has given special instructions to all its cadres to stop targeting civilians and party workers. We have asked them (cadres) to halt physical attack on unarmed people.'

But that order does not seem to have stopped the Maoists from abducting school students and targeting civilians.

The worst carnage in the nine-year-old history of the insurgency came on June 6, when 41 people were killed in a landmine blast in the Madi area of southern Chitwan district bordering Bihar.

That the attack was a handiwork of the rampaging rebels was confirmed by Prachanda, who admitted having committed a mistake.

Over 12,000 people, including Maoists, security forces and innocent civilians, have lost their lives since the war started in February 1996.

The rebels have launched a violent crusade against their 'class enemies', who also include workers or liberal political parties. They have caused substantial damage to basic physical infrastructures, and scared away tourists from visiting the country.

Which is why the seven-party alliance has cautiously welcomed Prachanda's assurance to cease attacks on civilians and political party workers, while the king's government has cautioned the parties against joining hands with the 'terrorists.'

'It would be unfortunate if the parties join hands with those enlisted in the terrorists group,' Information and Communication Minister Tanka Dhakal told a news conference in Kathmandu.

It would be against international norms if the political parties held talks with the Maoists on foreign soil, he added, referring to the recent meetings in Delhi between political party leaders and Maoist emissaries.

After dismissing the re-installed Sher Bahadur Deuba government, King Gyanendra sought three years to hold local and parliamentary elections and resolve the crises facing Nepal. Subsequently, the government announced that the municipal polls would be held later this year.

'The king is weakening gradually'

But the political alliance led by Koirala is demanding the restoration of the House of Representatives and the formation of a interim government which, in turn, would begin fresh negotiations with the rebel Maoists and work towards a new constitution through constituent assembly elections.

"That's the best way to resolve the crises, this bloody conflict," said Hari Roka, a political analyst and researcher at Jawaharlal Nehru University.

"Sooner or later, the parties have to come together and work on a new constitution, which should address the concerns of all sections of the deprived disenchanted Nepali people," he added.

They include Dalits, who make up 25 percent of Nepal's population of over 23 million; the ethnic minorities of the mountains and the plains better known as the Terai belt bordering India and the women, he added, echoing the sentiment of many intellectuals including Maoist leaders.

Meanwhile, Delhi appears all set to welcome former prime minister Thapa just as it did Koirala. And it is sticking to its avowed policy vis-a -vis Nepal: that the constitutional monarchy and multiparty democracy are the twin pillars of Nepal's stability.

Delhi made its position clearer when it told Koirala, 'The common platform (on which the parties stand post February 1) should be the basis for dialogue on an eventual political settlement (of the conflict) based on multi-party democracy and constitutional monarchy.'

Ministers in Kathmandu have been criticising Indian and Western envoys in Kathmandu for unnecessarily interfering in Nepal's international affairs.

To this, Delhi has made it clear that 'any attempt to encourage democracy in our neighborhood should not be construed as unwanted interference.'

The Maoists are coming!

India -- with which Nepal shares civilisational and cultural ties and an open border -- has been the promoter of democracy since right after its independence in 1947. Indian leaders supported Nepal's first democratic struggle in 1950; then in the 1960s after the late king Mahendra's power grab; and again in 1990. That kind of support appears to be continuing in 2005 as well.

"If that hadn't been the case, senior leaders would not have come here, and Delhi wouldn't have extended warm hospitality to them," said JNU's Roka.

"These meetings will be helpful. The Indian response is encouraging political parties to stand united for democracy and, subsequently, dialogue with the Maoist rebels."

But the big question is: Will the two sides that have been at loggerheads after the king's power grab on February 1 reconcile with the monarchy?

"Nothing is impossible," said Krishna Sitaula, Koirala's aide and chief of the Nepali Congress Organization Department, who just returned to Kathmandu from exile. "It is possible. But the king should be willing to listen to the people and respect the popular desire for pluralism."

Nepali leaders have been demanding a ceremonial, rather than an active monarchy in a new Nepal.

But the king, whose advisors mainly include conservatives including those close to the Sangh Parivar in India, has been promoting the slogan: 'Monarchy for democracy in the 21st century!'

The way Nepal will head in the days to come -- liberal republican, status-quo-ism,authoritarian/totalitarian -- will be clear after King Gyanendra returns from his trip of friendly countries in the Gulf, analysts say.

Meanwhile, exiled Nepali politicians, activists and friends of Nepal in New Delhi are keenly following the developments in India's northern neighbor as they await the medical-cum-political visit of yet another former prime minister.

Surendra Phuyal is the special correspondent of The Kathmandu Post in New Delhi.

He can be reached at surendraphuyal@rediffmail.com