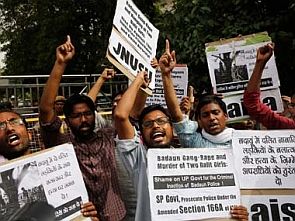 A four-member Special Investigating Team has been constituted to probe the shocking gang rape and murder case of two teenaged sisters in Katra Sadatganj village in Badaun, officials said.

"The SIT headed by circle officer of Ujhani, Mukesh Saxena has been set up for investigating the case", Senior Superintendent of Police Atul Kumar Saxena said.

The SSP said that SIT visited the village on Friday and talked to the complainants and witnesses.

The team got the houses of the accused opened and searched them, Saxena said adding that help of the witness was being taken for preparing the sketches of the two unidentified accused and the entire process was being videographed.

The case is being monitored at the government level and taking the seriousness of the matter for solving it promptly, the investigations have been taken from Inspector Veerpal Sirohi, the SSP said.

The two teenage girls, aged 14 and 15 years, were allegedly gang-raped and murdered with their bodies found hanging from a mango tree in a village in Ushait area in Badaun, sparking a nation-wide outrage.

The girls went missing on May 27 and their bodies were found the next day.

The two accused policemen have been terminated from their service.

Image: Students hold placards and shout slogans during a protest against the Badaun sisters' rape in New Delhi. Photograph: Reuters