Sidhu to campaign for AAP, wife to contest Punjab polls

Punjab Congress president Amarinder Singh says Sidhu is welcome to the party is he wants to join. 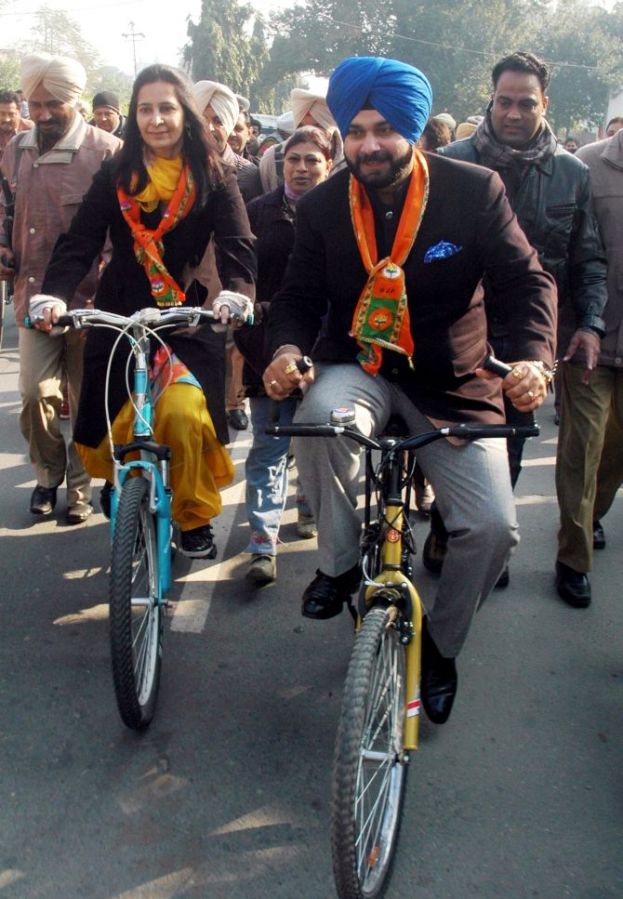 Former Bharatiya Janata Party member of Parliament Navjot Singh Sidhu, who recently resigned from the Rajya Sabha, is likely to join the Aam Aadmi Party next month, while top AAP sources said that he might not contest the Punjab assembly elections in 2017.

According to sources, both Sidhu and his wife Navjot Kaur, who is a BJP MLA from Amritsar, are likely to join the AAP next month, but only the latter may contest the elections on an AAP ticket.

Earlier on Tuesday, Navjot Kaur had said that she was still with the BJP.

Sources said Navjot Kaur was abstaining from joining the AAP before August, perhaps to avert bypoll in her constituency before the scheduled assembly elections, because her joining the AAP will lead to her disqualification under the Anti-Defection Law.

The AAP Constitution too doesn’t allow two members of a family to hold any office within the party, including the elected post, sources added.

They, meanwhile, refuted that Sidhu would be projected as the AAP chief ministerial candidate in Punjab, adding that he would be actively campaigning for party candidates in the elections.

Sidhu’s campaign may help the AAP increase its tally as he has been attacking the incumbent Akali government openly.

There is also ‘possibility of a revolt in the AAP, if the party projects a chief ministerial candidate’ before the Punjab polls, they said.

The party is set to release its first list of around 30 candidates for the Punjab elections by the end of July.

Meanwhile, Punjab Pradesh Congress Committee president Captain Amarinder Singh (retd) said on Tuesday that Sidhu was welcome to the Congress if he desired so.

“Congress’ doors are open for everyone,” he said.

However, Amarinder clarified that there was no communication between him and Sidhu on the matter. Asked whether any Congress leader was in touch with Sidhu, he said ‘not to his knowledge’.

The PCC president said Sidhu had a Congress background as his father late Bhagwant Singh Sidhu was associated with the Patiala District Congress Committee.

“When my mother was Patiala DCC president, Sidhu's father was her general secretary,” he said referring a long association of the Sidhu family with the Congress.

He said later he served as the Punjab Advocate General during the regime of Darbara Singh.

Asked whether he had met Sidhu of late, Amarinder said, “We are both from Patiala and we are both Sidhus”. He said he had seen him playing and practicing cricket when he was young. “I don’t remember having met him for a long time now,” he added.