Sidhu has his way as Punjab CM replaces DGP The order to appoint Chattopadhyaya as the officiating director general of police was issued late Thursday night.

Reacting to the development, the Punjab Bharatiya Janata Party and Bahujan Samaj Party said it has now become clear that Punjab Chief Minister Charanjit Singh Channi had 'no authority' in the state and Sidhu is 'running the show'.

Sidhu has been pressing for replacing Sahota who had headed the special investigation team formed by the previous Shiroamni Akali Dal-BJP government to probe desecration incidents.

Sidhu was learnt to have been backing Chattopadhyaya's name as the state DGP after Channi replaced Capt Amarinder Singh as the Punjab chief minister in September.

A 1986-batch IPS officer, Chattopadhyaya would hold this charge until a regular DGP is appointed out of a panel of three IPS officers shortlisted by the Union Public Service Commission.

The Union Public Service Commission is set to hold a meeting on December 21 in Delhi for shortlisting the panel of three officers from the state government's list of 10 officers.

Sahota, a 1988-batch IPS officer, was appointed as the officiating DGP after Channi became the chief minister of Punjab in September. Sahota was considered as Channi's choice.

Chattopadhyaya would also continue to hold the charge of the director-general of police, Punjab State Power Corporation Limited, Patiala and the additional charge of chief director of the Vigilance Bureau.

After assuming the charge, Chattopadhyaya held a meeting with the top brass of the state police.

An official release quoting Chattopadhyaya said besides maintaining law and order ahead of the Punjab assembly elections, he will focus on the fight against drug trafficking, human trafficking and improving road safety in the state.

A President's Police Medal for Gallantry awardee, Chattopadhyaya had served in various critical and sensitive capacities in the state police during days of terrorism and on deputation at the Border Security Force (BSF), said the release.

Reacting to the appointment of a new officiating DGP, Punjab BJP general secretary Subhash Sharma took on the Congress-led government in Punjab, saying this move reflected that Channi has 'no authority' in the state.

Before that the AG who was appointed by the CM was also replaced, said Sharma.

He alleged that Sidhu had been 'running' the government from the 'backdoor' with the 'blessings' of the Gandhi family while Channi has just remained a 'rubber stamp'.

With Sidhu also being appointed as the chairman of the Punjab election committee of the Congress, it has become clear that Channi was appointed as the CM just to 'garner' votes of the scheduled caste community.

Punjab Bahujan Samaj Party chief Jasvir Singh Garhi also took an exception to the replacement of Sahota and said with the replacement, an officer belonging to the scheduled caste community, the 'anti-Dalit face of the Congress has been exposed'. 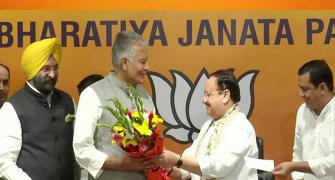 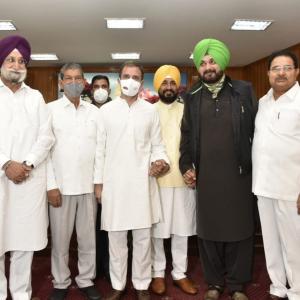