Recent statistics show that the situation is no different across the country with several hospitals lacking the infrastructure to manage a breakout of a blaze. 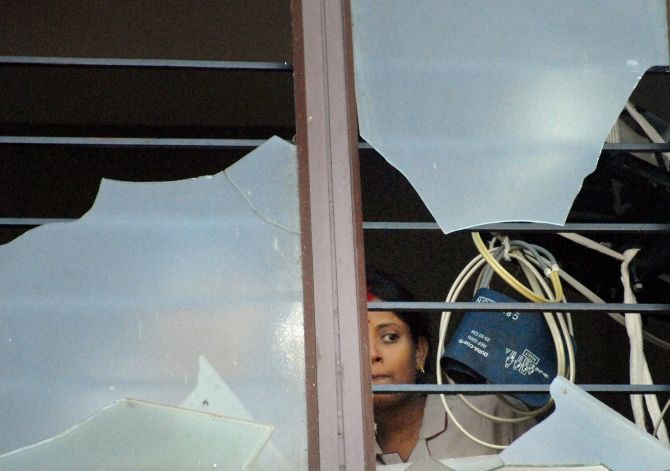 IMAGE: A nurse peers out of the damaged SUM Hospital in Bhubaneshwar that killed at least 20. Photograph: PTI

The fire mishap on Monday at Institute of Medical Sciences and SUM Hospitals in Bhubaneswar that killed at least 20 has brought the fire safety norms and their execution under the scanner across the country.

This comes barely five years after the Kolkata AMRI Hospital blaze in 2011 that had claimed 89 lives.

The police have arrested four employees of SUM Hospital including its superintendent and booked them under sections of the Indian Penal Code that deal with culpable homicide and negligence on fire matters. “More arrests are likely,” said Y B Khurania, commissioner of police.

The state government has instituted two probes, one by the revenue divisional commissioner (central zone) and other by a three-member panel led by the director medical education and training into the incident. The state health minister, Atanu Sabyasachi Nayak, said the health department found the hospital to have flouted safety guidelines including fire prevention system and patient evacuation management.

The statistics are alarming. According to a note of the director, medical education and training, Odisha government, only three corporate hospitals in Bhubaneswar, Cuttack and Puri, where more than 500 private hospitals and nursing homes are operating, have fire safety certificates. The list did not include the name of SUM hospital, putting a question mark on how it was allowed to operate without the statutory fire safety certificate.

Even director general of police, fire services, Binoy Kumar Behera, could not provide an answer on the fire safety measures in different hospitals. “We do not have any list of private nursing homes and other clinical establishments operating in the state. We are, however, taking measures for the new units coming up,” Behera said.

On the SUM hospital tragedy, he said, “We had issued a letter to the hospital in 2013 to undertake certain firefighting measures. But, nothing has been done in the past three years.” The DMET and fire services department, meanwhile, have filed separate FIRs at the local police station against the SUM Hospital authorities alleging negligence. IMAGE: The state government has order a probe into the blaze at the hospital to ascertain if  the hospital flouted safety guidelines. Photograph: PTI

Norms issued but no follow-up

The Centre and the state governments had issued fire safety guidelines to be followed at different clinical establishments after the AMRI Hospital incident in 2011. However, there was little follow up action to ensure implementation of the guidelines. In some cases, even judicial intervention was necessary to enforce the rules.

>> Putting in place disaster management team at each hospital

AMRI Group of hospitals, however, claims it had spent Rs 1.5-2 core at each of its four operational hospitals after the 2011 fire to create firefighting infrastructure. Its hospitals are equipped with fire extinguishers, smoke detectors and water sprinkler systems according to the norms. This apart, the hospital installed pressurised ventilators and auto dumpers which prevent the smoke from spreading across an area and evacuate it via windows. “Wherever water sprinkler systems cannot be installed due danger of short circuit, we have installed carbon dioxide sprinklers which can douse the flame,” Rupak Barua, Group CEO of AMRI Hospital said.

The issue is pan-India. In Tamil Nadu, especially Chennai, disposing of a public interest litigation in April, 2016, the Madras high court had asked various regulatory authorities to follow safety measures in hospitals, which use lot of electrical equipment and inflammable material. The court had asked the government to formulate policy on the fire safety measures for new hospital buildings like provision of safety ramps for easy evacuation of patients.

In fact, the Chennai Metropolitan Development Authority has a separate annexure of Development Rules and Development Control rules for fire safety in hospitals, while the state health and family welfare department has come out with “guidelines for desirable safety methods” in existing hospital buildings.

A senior official from the Tamil Nadu Fire and Rescue Service said, various departments including the Fire and Rescue Service, CMDA, district level town planning bodies, are conducting inspections on the safety measures at different hospitals and would submit the report to the high court. Overall the hospitals in Tamil Nadu are much ahead in terms of fire safety system, he added. 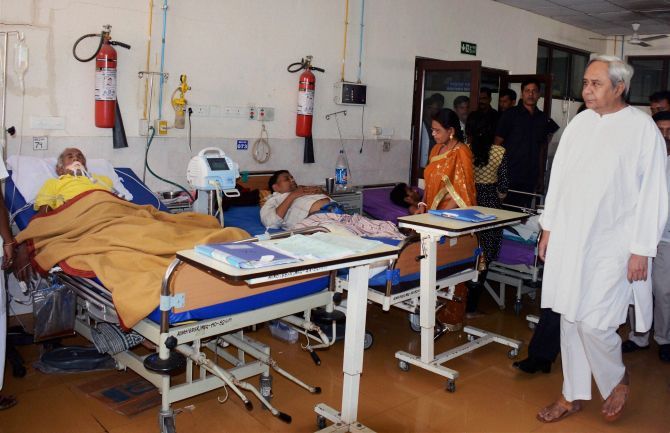 IMAGE: Odisha Chief Minister Naveen Patnaik visits the patients of SUM Hospital who were rushed to nearby hospitals after the blaze. Photograph: PTI

Preetha Reddy, vice-chairperson of Apollo Hospital Enterprise Ltd, said Apollo has been following the fire safety stands prescribed by the National Accreditation Board for Hospitals. “It is our responsibility to follow the safety norms, since we are dealing with the lives of people in hospitals,” she added, while declining to comment on the overall industry scenario.

However, Association of Hospitals which comprises 56 top hospitals in Mumbai will meet next week to discuss fire safety measures.

“The managing committee of AOH is meeting next week and the fire safety issue will be discussed. We will deliberate if new guidelines need to be issued to our members.” said association’s vice-president and the Hinduja hospital CEO Gautam Khanna.

Already some of the big hospitals have formed in-house fire fighting units and hired retired fire brigade officers to implement safety measures. “In our hospital, regular mock drills are being carried out and marshallers have been identified on each floors to guide people in case of evacuation,” Khanna said. “We have a team of seven fire safety officers who are trained in firefighting function. Additionally, we are conducting regular training for all our staff,” said Dr Rajeev Boudhankar, CEO of Bhatia Hospital.

Some health ministry officials, however, said that the Centre has no plan to convene any meeting on the issue of fire accidents in hospitals due to lack of preparedness. The Centre will only act if the states require any help. Distancing themselves from the matter, officials believe ensuring hospitals have required preparedness is a state’s job. While the Maharashtra Fire Prevention and Life Safety Measures Act, 2006 makes it mandatory for all buildings to have fire safety mechanisms, hospitals in the city became more proactive, following the fire in AMRI Hospital in Kolkata in 2011.

In 2012, the city fire brigade issued notices to several hospitals after an inspection found violations in the premises. These included lack of proper training of staff, conversion of refuge areas in buildings into offices and blocked staircases and passages.

-- With additional reporting by Aneesh Phadnis in Mumbai, Gireesh Babu in Chennai, Avishek Rakshit in Kolkata and Veena Mani in New Delhi 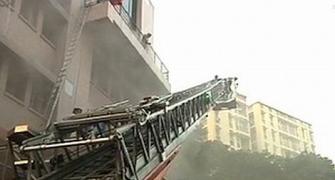 AMRI fire: Healthcare is nothing but a lucrative business in WB 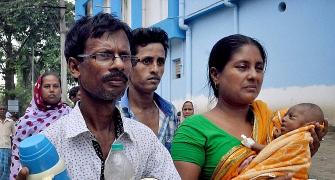 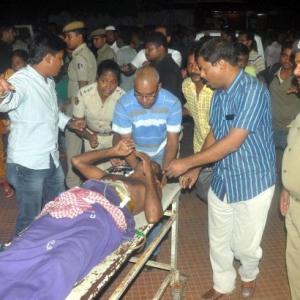 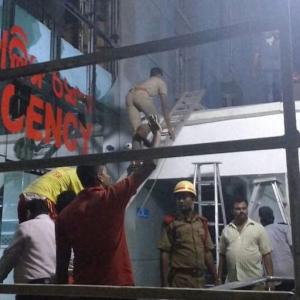