Rebel Shiv Sena leader Eknath Shinde on Tuesday said he will soon return to Mumbai, and rubbished the Sena's claim that as many as 20 MLAs of his group are in touch with the Uddhav Thackeray-led party. IMAGE: A banner, with faces of Balasaheb Thackeray, Eknath Shinde and Anand Dighe, seen near the Radisson Blu Hotel, in Guwahati on Monday. Photograph: ANI Photo

Talking to reporters outside the luxury hotel where he and his group of MLAs are lodged since last week, Shinde also said he has the support of 50 MLAs.

"All these MLAs have come here on their own and to take forward Hindutva," Shinde said.

Senior Sena leaders have been claiming that around 20 MLAs of the party, now with Shinde in Guwahati, are in touch with them and want to return to Maharashtra.

Shinde said, "Some people from that side are claiming that some MLAs here are in touch with them. If it is the case, then they should reveal their names."

"Our stand is clear...to take forward the Shiv Sena, dreamt of by late Balasaheb Thackeray. We will continue to toe the line of his Hindutva," he said.

Shinde said Sena MLA Deepak Kesarkar will be speaking to media on behalf of the rebel legislators and brief reporters about their next steps.

"No need to worry about the MLAs here. All the MLAs are happy and fine. Nobody is here for any personal benefit," he said.

Since landing in Assam's Guwahati city, Shinde has most of the time remained indoors.

On Tuesday, he came out of the hotel, where he is camping, with a couple of his close associates to make the brief statement.

Shiv Sena minister Uday Samant, who is also part of the rebel camp, said none of the legislators staying in Guwahati are in touch with any party leader in Mumbai.

"We are not in touch with any Shiv Sena leader in Mumbai. We are in touch only with Eknath Shinde," Samant in a pre-recorded video statement.

"No need to have any misunderstanding. We have voluntarily came here with Shinde, who has sincerely carried forward the idea of Hindutva conceptualised by Balasaheb Thackeray," he added. 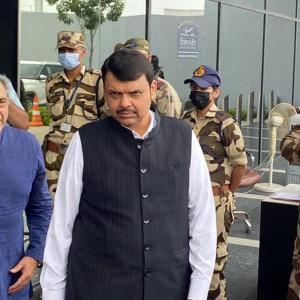