Fadnavis was joined by BJP MP and senior lawyer Mahesh Jethmalani in the meeting with the home minister, sources said.

They are believed to have explored various options available for the party and deliberated on their legal feasibility as the BJP works to recapture power in Maharashtra with the help of rebel Shiv Sena MLAs and several independent lawmakers.

After meeting Shah, Fadnavis drove to Nadda's residence and briefed him about the unfolding political developments in the western state.

Earlier in the day, he arrived in the national capital from Mumbai to discuss the issue with the party's top brass.

Around 39 rebel Sena MLAs and at least 10 independent legislators from the state have lodged themselves at a five star hotel in Assam in their bid to bring down the Chief Minister Uddhav Thackeray-led government.

The BJP has denied any role in the rebellion but Fadnavis is being seen to be playing a key role in working out a post-MVA dispensation which he may head with support from the Sena rebels.

BJP sources have maintained that any concrete outline of the next government has not been worked out but added that Eknath Shinde, the senior Sena leader who has led the rebellion against his party's alliance with traditional adversaries the Congress and the NCP, and other key members of the group will be suitably accommodated in case their party comes to power.

Shinde may be made deputy chief minister in such an eventuality.

The priority right now is to bring down the MVA government as it has clearly lost majority in the assembly, BJP leaders said.

The rebels may approach the state governor, conveying the decision to withdraw their support from the Thackeray government.

Governor Bhagat Singh Koshyari then may ask the ruling alliance to undergo a floor test in the assembly.

The next couple of days may see a fresh movement from the rebels against the government, sources said.

Though the BJP sources expressed confidence that the Uddhav Thackeray government is on its last leg, the party is treading cautiously to avoid any wrong move like the one in 2019 which had caused it embarrassment when Fadnavis formed a short lived government in alliance with the NCP faction headed by Ajit Pawar without ensuring adequate support of MLAs.

Fadnavis had to resign in three days as NCP supremo Sharad Pawar rallied his party MLAs to thwart his nephew's bid to join hands with the BJP to form the government.

The Sena then joined hands with the NCP and the Congress to come to power.

The BJP has long nursed a grudge against the Sena as both parties had fought the 2019 assembly polls together and had secured a comfortable majority.

However, its ally insistence that the post of chief ministership should be rotated between the two parties and not be held by the BJP alone led to a split. 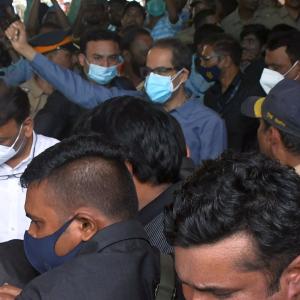