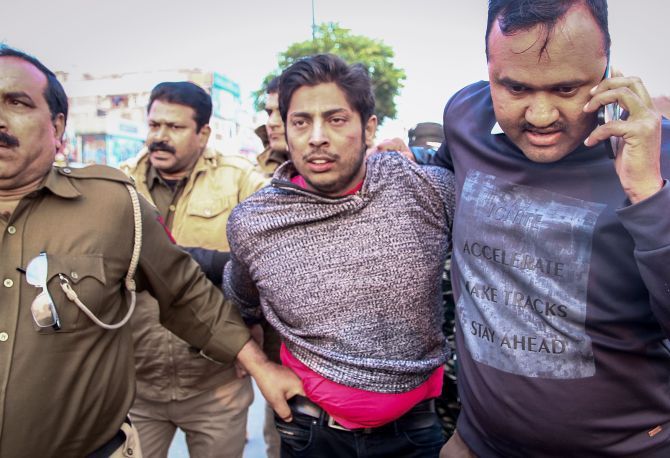 IMAGE: The man who fired bullets in Shaheen Bagh area being detained by police in New Delhi on Saturday. Photograph: ANI Photo

The man who fired aerial shots at Shaheen Bagh protest site on Saturday has told the police that he was angry with the traffic blockade as his cousin's wedding is approaching and he had to run around a lot make arrangements, police sources said.

The police have detained the man, identified as Kapil Gujjar, a resident of Dallupura village near Delhi-Noida border, said Chinmoy Biswal, Deputy Commissioner of Police, South-East.

"The police personnel overpowered and detained him on the spot while he was firing in the air. He is being interrogated.

"He said his name is Kapil. An FIR is being registered, further investigation is underway," said DCP Biswal while speaking to the reporters in New Delhi.

According to Delhi Police sources, Kapil has told the police that the protest at Shaheen Bagh caused traffic jams in the area.

His cousin sister's wedding was coming up and he used to get stuck in traffic for hours while going to Lajpat Nagar to make arrangements. Hence, he took this step. The man had fired in the air, Biswal said.

The weapon used by him has been seized.

Empty bullet shells were seen at the site where the man, a resident of Dallupura village (near Noida border), opened fire in Shaheen Bagh.

However, no injuries have been reported in the incident.

Protests against Citizenship Amendment Act (CAA) have been going on in at Delhi's Shaheen Bagh for over a month now.