Three people suffered injuries in a terrorist attack in south London on Sunday, during which Scotland Yard officers shot dead a terror suspect strapped with a "hoax bomb". 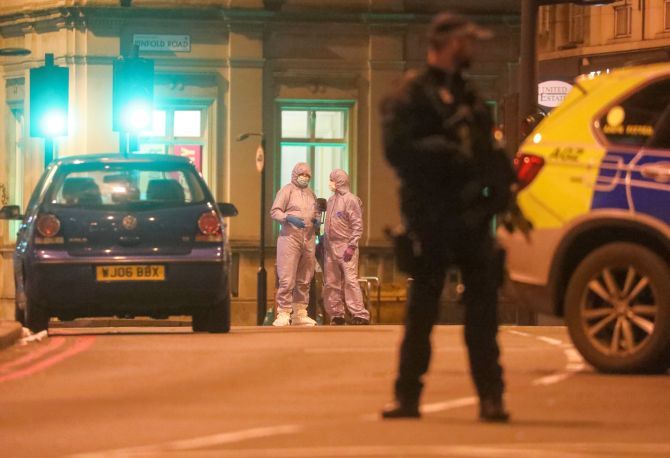 IMAGE: Police forensics officers are seen near a site where a man was shot by armed officers in Streatham, south London, Britain. Photograph: Simon Dawson/Reuters

The Metropolitan Police said the incident in Streatham was part of an active counter-terror operation during which the male suspect was pronounced dead at the scene. A device strapped on his body was later established as fake at the end of the attack, which counter-terror officers believe to be "Islamist-related".

According to reports, the deceased suspect had been released from prison recently after serving half of a three-year-and-four-month sentence for the possession and circulation of terrorist material.

He was named by the United Kingdom media as Sudesh Mamoor Faraz Amman, a London student believed to have family roots in Sri Lanka. He was jailed aged 18 in December 2018.

"As part of a proactive counter terrorism operation, armed officers were in immediate attendance and shot a male suspect, who was pronounced dead at the scene," said Met Police Detective Assistant Commissioner Lucy D'Orsi.

"A device was found strapped to the body of the suspect and specialist officers attended (to it). Cordons were put in place and it was quickly established that this was a hoax device.

"The situation has been contained and officers from the Met's Counter Terrorism Command are now leading an investigation into the incident. The incident was quickly declared as a terrorist incident and we believe it to be Islamist-related," she said.

Two of the three victims of the attack on the busy Streatham High Street around 1400 GMT were stabbed and the third sustained injuries from broken glasses, triggered from the discharge of the police firearm for shooting down the suspect.

"Three victims have been taken to south London hospitals. One man is being treated as life-threatening, one woman has non-life threatening injuries and another woman has minor injuries," D'Orsi added.

Emergency services, including paramedics and armed police, responded to the incident on Streatham High Road, from where social media images showed plain-clothed policemen pursuing a suspect who was later pronounced dead.

Some eyewitnesses reported seeing a machete-wielding man with some silver canisters strapped to his body before he was shot. Police shouted for people to "get back" as they cleared the area of shoppers and bystanders.

Pictures circulating on social media show the suspect face down and lying outside a Boots pharmacy shop as a police officer aims a gun. The Met Police have issued a "common sense" plea for restraint in circulating pictures and videos of the incident, including images of the officers involved and of the victim as it appealed to the public to share any footage of the attack with its investigating team.

Some reports suggest a man entered a shop and started stabbing people. It appears he then left the shop and stabbed a woman, possibly a cyclist. Witnesses reported hearing three gun shots, as armed police approached.

British Prime Minister Boris Johnson took to Twitter to thank the emergency services for their response to the attack.

“Thank you to all emergency services responding to the incident in Streatham, which the police have now declared as terrorism-related. My thoughts are with the injured and all those affected,” he said.

He said, "I want to pay tribute to the speed and bravery of the police who responded and confronted the attacker -- preventing further injuries and violence -- and all of the emergency services who came to the aid of others.

“Tomorrow [Monday], we will announce further plans for fundamental changes to the system for dealing with those convicted of terrorism offences.”

UK Home Secretary Priti Patel said in her Twitter statement that she is being kept updated by the police on the developments and hailed the “brave” officers who contained the situation.

London Mayor Sadiq Khan also thanked emergency services for their "swift and courageous response", adding: "They truly are the best of us.

"Terrorists seek to divide us and to destroy our way of life -- here in London we will never let them succeed."

In November last year, two people were killed after convicted terrorist Usman Khan went on a stabbing frenzy in London Bridge area of the UK capital.

It later emerged that Khan's family originated from Pakistan-occupied Kashmir and he was out on parole after serving part of his sentence for plotting terrorist attacks on the UK. 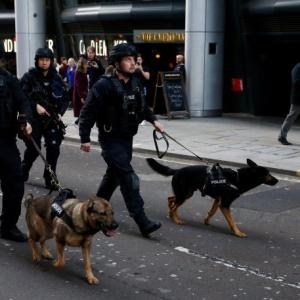