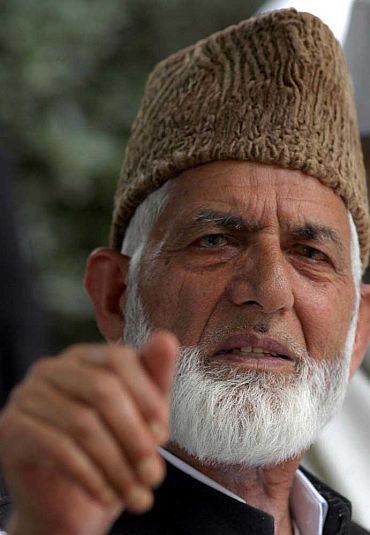 Geelani and members of Shia community made separate attempts to hold protest march despite strict restrictions imposed by the authorities on the movement of the people especially in the heart of Srinagar and south Kashmir townships of Anantnag and adjoining districts, disrupting normal life.

Geelani-led Hurriyat Conference had planned to organise a condolence meeting at Batengoo, the home town of Bhat who died due to severe burn injuries sustained in a  petrol bomb attack at Udhampur recently, and had appealed people to participate in the event to mark the fourth day ceremony of the deceased.

The Hurriyat chairman, who was under house arrest, came out from his Hyderpora residence on Srinagar-Airport road and tried to proceed towards Batengoo but was prevented by the police personnel deployed there, officials said adding he was taken to the nearby police post Humhama and lodged there.

Apprehending law and order problem in view of the proposed public meeting in Anantnag and attempts by Shia mourners to take out a procession through traditional route -- Shaheed Gunj to Dalgate to mark 8th Muharram, authorities imposed strict restrictions on the movement of the people in various parts of the city and the roads leading to Batengoo village of Anantnag.

Concertina wires were laid at various city routes in and around the city centre Lal Chowk and all routes leading towards Anantnag, blocking the passage of vehicles. Lal Chowk and surrounding areas were put off limits for people to prevent the Shia community from taking out the Muharram procession.

The police did not allow any vehicles to enter the city centre as a preventive measure.