Prohibitory orders imposed in Nandigram ahead of polling

The Election Commission on Wednesday imposed prohibitory orders under Section 144 of the CrPC in Nandigram assembly constituency in West Bengal's Purba Medinipur district, a day ahead of the high-stakes elections here, a senior official said. Besides, the EC has also started air surveillance in the area with the help of a helicopter, he said.

People who are not voters of Nandigram are not being allowed to enter the constituency in view of the sensitivity, he added.

"Nandigram is a sensitive constituency with high-profile candidates like Mamata Banerjee and Suvendu Adhikary. We want to ensure that the law and order situation is not compromised and people can vote freely without fear," the official told PTI.

"That is the reason for imposing the prohibitory orders, which will be in place till Friday midnight. A person who is not a voter of Nandigram will not be allowed to enter the area till the polling is over," he said.

The order prohibits the assembly of five or more persons, besides imposing other restrictions, he said.

Twenty-two companies of central forces are being deployed in the constituency, which has a total of 355 polling booths and 75 per cent of them will have a webcasting facility, the official said.

Central forces along with the state police have already started naka checkings at crucial junctions in the area, he said.

"Vehicles are being thoroughly checked before they are allowed to enter Nandigram. No outside vehicles are being allowed in," the official said, adding that anybody found trying to create a disturbance "will be handled strictly".

The EC has also decided to deploy a 22-personnel quick response team in the area on the election day, the official said.

The EC has also constituted a team of officials who will supervise the proceedings in Nandigram on the poll day, he said.

The local authorities were also asked by the EC to execute all the pending arrest warrants by Wednesday night and take people, accused in various cases, into custody, he said.

Nandigram wore a deserted look during the day with only a few shops open. Vehicles such as e-rickshaws and autos were mostly unavailable with people choosing to stay indoors.

"We want peaceful polling and no disturbance here on April 1. People should get a peaceful environment so that they can cast their votes without any fear," a resident of Sonachura said.

All eyes are on battleground Nandigram that is goin to the polls on Thursday with the chief minister engaged in a fierce contest with her protege-turned-rival Suvendu Adhikari of the BJP. 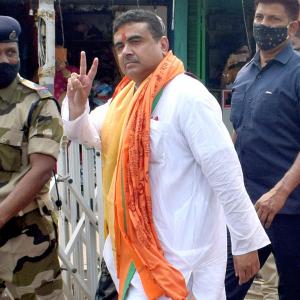