The Supreme Court on Tuesday directed the Maharashtra government to put “hands on hold” in the investigation against former police commissioner Param Bir Singh over the allegations of misconduct and corruption. A bench of Justices S K Kaul and M M Sundresh said the "messy state of affairs" has "the propensity of unnecessarily shaking confidence of people in police system".

When the counsel for Maharashtra asked the apex court not to record its direction to put “hands on hold” the in order, the bench recorded his assurance in the matter.

“We have now put down the matter for final hearing, investigation being completed can pose problems. Mr Darius Khambata, senior advocate, has assured to put their hands on hold. We take the assurance on record,” the bench said.

The apex court asked the parties to file written synopsis and posted the matter for hearing on March 9.

The court expressed concern over the “messy state of affairs” in the state and said this is an unfortunate scenario.

“We have had occasion to say earlier that it is messy state of affairs. This is an unfortunate situation.

“It has the propensity of unnecessarily shaking confidence of people in police system. Process of law must be carried in a manner,” the bench observed.

Solicitor General Tushar Mehta, appearing for the Central Bureau of Investigation, submitted that it is in the interest of things that all cases herein be investigated by the central probe agency.

“Once you proceed with an investigation and record it then its not fair to stop midway. State should not do anything that makes the process difficult,” Mehta said.

The apex court had earlier allowed Mumbai Police to carry on the investigation against Singh but restrained it from filing charge sheets on the FIRs against him over the allegations of misconduct and corruption.

The state police had earlier told the apex court that Singh cannot be considered a "whistleblower" under the law as he chose to speak out against alleged corruption involving former home minister Anil Deshmukh only after his transfer.

The top court had granted a major relief to Singh on November 22 by directing the Maharashtra Police not to arrest him in criminal cases lodged against him and had wondered if he was being hounded for filing cases against police officers and extortionists, "what could happen to a common man".

Seeking dismissal of Singh's plea for a CBI probe into the entire matter and against any coercive action by the state, the Maharashtra government has filed an affidavit in the apex court and said that the ongoing probe in criminal cases against the former top cop should not be interfered with.

The high court had held that it was a service matter, and rejected his claim that the government's action was a consequence of his allegations of corruption against Deshmukh. 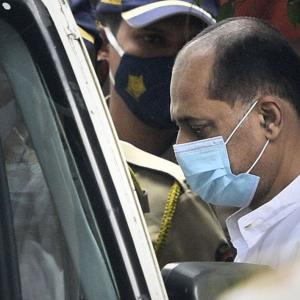