The Supreme Court Wednesday issued notices to Attorney General K K Venugopal and advocate Prashant Bhushan on the contempt proceedings it has initiated against the activist-lawyer for his alleged derogatory tweets against the judiciary. 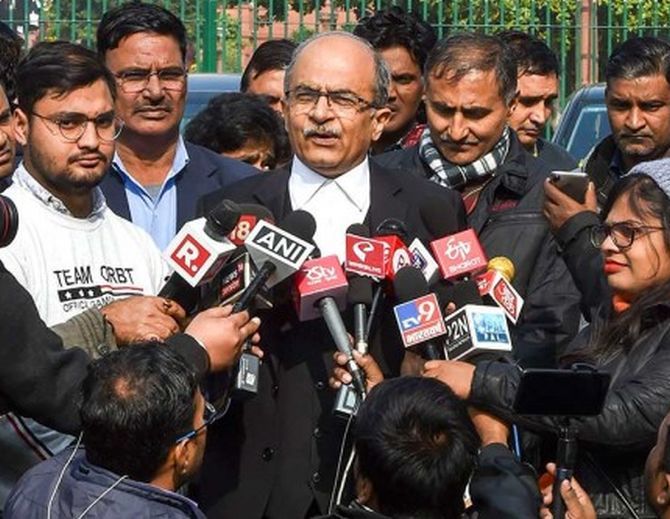 The apex court directed that Twitter INC be made a party, instead of Twitter India, to the contempt proceedings it has initiated suo motu (on its own) and asked the US-based firm to file a response in the matter.

A bench headed by Justice Arun Mishra was told by Twitter's counsel that if the top court directs, then the firm would disable the alleged contemptuous tweets of Bhushan.

The bench, which asked the Attorney General to assist in the matter, posted the case for hearing on August 5.

The allegedly contemptuous tweets were critical of the top court and posted by Bhushan on Twitter on June 27 and June 29.

Senior advocate Sajan Poovayya, appearing for Twitter, told the bench that Twitter India has wrongly been made a party in the matter and it should have been Twitter INC.

The bench, while noting that the correct party in the matter should be Twitter INC and not Twitter India, permitted the company to file an appropriate application in this regard.

The bench also observed that initially the contempt issue was placed before the administrative side of the apex court but it was directed to be listed on the judicial side.

Bhushan has been raising issues pertaining to judiciary and recently he was very critical of the way in which the top court handled the matters related to migrant workers amid the COVID-19 pandemic.

Earlier also, the apex court in November 2009, had issued contempt notice to Bhushan for allegedly casting aspersions on some sitting and former top court judges in an interview to a news magazine.

The matter which was not heard by the apex court as per the record available on the top court's website since May 2012 is now listed for hearing on July 24.

It is schedule to be heard by a bench headed by Justice Mishra on Friday as per the list of business of July 24, uploaded on the apex court website.