The Supreme Court on Tuesday fixed November 14 to commence hearing on a batch of petitions challenging constitutional validity of the Centre's decision to abrogate provisions of Article 370 that gave special status to Jammu and Kashmir. 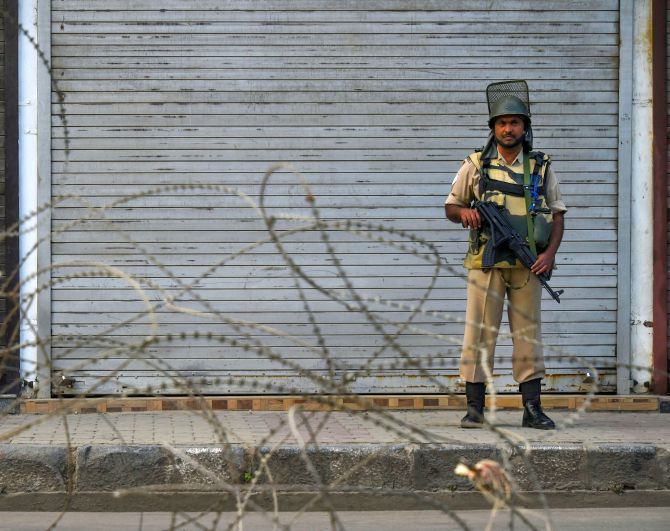 The apex court at the same time rejected the plea that there was a need for status quo as the state of Jammu and Kashmir would be bifurcated into two Union Territories on October 31.

"If the petitions are allowed, can't the clock be put back," said a 5-judge Constitution bench headed by Justice N V Ramana.

The top court also refused the plea of the petitioners that the Centre and the Jammu and Kashmir administration should not be given more than two weeks to file their counter affidavits.

It allowed four weeks to the Centre and the J&K administration to file counter-affidavits on the petitions and also put an embargo on filing of any fresh writ petition challenging the constitutional validity on abrogation of Article 370.

The bench said that it has to give a 'reasonable time' to the Centre and J&K administration to file their affidavits as it is necessary that pleadings are completed so that the hearing could commence.

"We have to allow the Centre and the J&K administration to file counter-affidavit otherwise we can't decide the matter," said the bench, also comprising justices S K Kaul, R Subhash Reddy, B R Gavai and Surya Kant.

The top court said that after filing of the counter affidavits, the petitioners would file replies on them within a week thereafter.

"We can't have an unending process of filing of writ petitions in the matter. Whatever has been filed, has already been filed. It (filing of fresh petitions) must stop," the bench said, adding, "We have to give them (Centre and J&K) reasonable time to file their counters."

The bench also told advocates representing the petitioners raising objections to Attorney General K K Venugopal, seeking four weeks to file counter affidavit, that 'it is unreasonable to think that any decision or order will be passed before October 31'.

The petitioners submitted that under the new legislation, J&K would become two separate UTs on October 31 and thus there was a need for an urgent hearing as also granting status quo.

Venugopal, who was appearing for the Centre, and Solicitor General Tushar Mehta and advocate Shashi Juneja, representing J&K, submitted that they needed four weeks to file counter affidavits to 10 writ petitions and averments are different in each of them as the time frame sought by them was 'realistic'.

When senior advocate Raju Ramachandran, appearing for one of the petitioners, raised objection to the submissions of the top law officers, the bench said, "In this type of matter, how can we proceed without counter affidavits being filed?"

While refusing the petitioners' submission that the Centre and J&K would have filed their replies in pursuance of the August 28 hearing, the bench said, "We have to allow government to file the counter affidavits."

When the petitioners' counsels were insisting that enough time was with the Centre and J&K to file counter affidavits, the bench said, "In these matters, we cannot go ahead without the filing of counter affidavits."

At the outset, the hearing witnessed raking up of writ petitions filed before the Centre decided to scrap provisions of Article 370 on August 5.

Some of the petitioners said that they have filed pleas challenging the existence of provisions of Articles 370 and 35-A according special status to J&K before the Centre came out with the decision to abrogate them.

The bench called registrar (judicial) Surya Pratap Singh and asked him to verify pending petitions on the subject and inform it.

When some of the advocates sought intervention in the matter, the bench said, "If everybody wants to file writ petitions, there will be one lakh petitions. It will not work. Please don't try to do this. This will unnecessarily delay the matter."

The bench also pulled up advocate M L Sharma, who was first to file the writ petition, a day after the Centre's decision.

The bench said there was nothing in his petition and it was without any substance or ground.

"You played the fastest finger first. That does not mean that you will be heard first. There is certainly nothing in your writ petition but because you came within 72 hours of the Centre's decision, does it mean we have to hear you first," the bench told Sharma.

The petition on behalf of NC was filed by Lok Sabha MPs Mohammad Akbar Lone and Justice (retd) Hasnain Masoodi.

In 2015, Justice (retd) Masoodi had ruled that Article 370 was a permanent feature of the Constitution.

A plea has also been filed by bureaucrat-turned-politician Shah Faesal, along with his party colleague Shehla Rashid.

'There has to be balance between personal liberty & national security'

While hearing the pleas that have raised issue of curbs in the Kashmir Valley, the SC said there has to be a balance between personal liberty of an individual and national security.

The top court's remarks came after the Jammu and Kashmir administration said that 100 per cent landlines are working in the Valley and their is no restriction on he movement of people during the day time.

Solicitor General Tushar Mehta, appearing for J&K administration, told a bench headed by Justice N V Ramana that if mobile and internet facility were resorted in the Valley, then fake WhatsApp messages would be circulated from ‘across the border’ and it might incite violence there.

Several petitioners, including Executive Editor of Kashmir Times Anuradha Bhasin, activist Tehseen Poonawala and Foundation of Media Professionals, through its president Paranjoy Guha Thakurta, claimed that their was complete lockdown of communication networks and restrictions on movement of journalists.

The bench, also comprising justices R Subhash Reddy and B R Gavai, sought response from Centre and asked the petitioners to file their rejoinder and listed the matter in the second week of November.

"There has to be a balance between personal liberty of a person and the national security," the bench said while dealing with a batch of nine petitions pertaining to restrictions in the Valley.

At the outset, the top court dealing with the petition of CPI-M general secretary Sitaram Yechury said that it was habeas corpus (writ directing production of a person in detention before the court) petition and he has already been granted indulgence by the court.

"You have moved a habeas corpus petition. That prayer no longer survives as that person -- Mohd Yousuf Tarigami -- has himself moved the apex court challenging the abrogation of Article 370. It was a limited question. What further relief do you want," the bench told senior advocate Raju Ramachandaran, representing Yechury.

Ramachandaran said he want that either the detention of Tarigami be declared illegal or the authority be asked to justify his detention after August 5.

To this, the bench said that Jammu and Kashmir high court is functioning smoothly and the petitioner can approach there for relief.

Ramachandaran insisted that the matter be heard by the top court after which the bench directed the Centre to file its response and listed it for hearing in November.

In another related matter, Senior advocate Huzefa A Ahmadi, appearing for Senior Congress leader Ghulam Nabi Azad, said as per the court orders, Azad had visited the state and thus, his first prayer in the petition has been complied with.

Ahmadi said his other prayers still remain and the authority should tell the court as under what provisions of law the restrictions have been imposed on movement of people in the valley.

Mehta told the bench that during the day time, there are no restrictions on movement of people in the valley and curbs are imposed depending upon situation during the night time.

The bench asked Mehta to file an affidavit related to the restrictions on movement of people within two weeks.

The apex court also refused to entertain a petition filed by Sameer Kaul seeking restoration of internet communication services in hospitals and directed him to approach the Jammu and Kashmir high court.

Dealing with the petitions of Bhasin, Poonawalla and Foundation of Media Professionals, the top court questioned the number of intervention applications filed in the case.

It restrained filing of any fresh intervention application in the issue related to restriction imposed in the Valley.

Mehta questioned the locus of Poonawalla and said that he is a ‘TV personnality and not the resident of the state’.

To this, Justice Gavai apparently referring to Judge B H Loya death case said, "Is this Tehseen Poonawalla the same person, who has levelled certain allegation against us in the Nagpur case?"

Senior advocate Meenakshi Arora, appearing for Poonawalla said she is not in know how of any such incident, but the issue of restrictions in Kashmir, which is on its 57th day, is a serious matter and needs to be addressed.

She stated that they are aggrieved with the complete shutdown in the valley as people are being forced to suffer as most of the hospitals are in Srinagar.

"Under what notification this lockdown was done in Kashmir valley, the government must tell the court," she said.

Mehta denied any such claims and said hospitals are working smoothly in the valley and lakhs of people have availed the medical facilities since August 5 till mid September.

"There are no restrictions on health facilities and all the hospitals are working smoothly. These issues are being raised to serve some other interests," he said, adding that if the internet services are restored then there will be circulation of fake news.

He said that internet kiosks are being set up in various areas for the people and journalists.

The bench, while listing all these matters related to restrictions in Kashmir in the month of November, asked the Centre to file its reply on these petitions.