The Supreme Court on Monday imposed a 'nominal fine' of Re 1 on activist-lawyer Prashant Bhushan after he was convicted of criminal contempt for his two tweets against the judiciary, observing it was "showing magnanimity" instead of handing out any severe punishment. 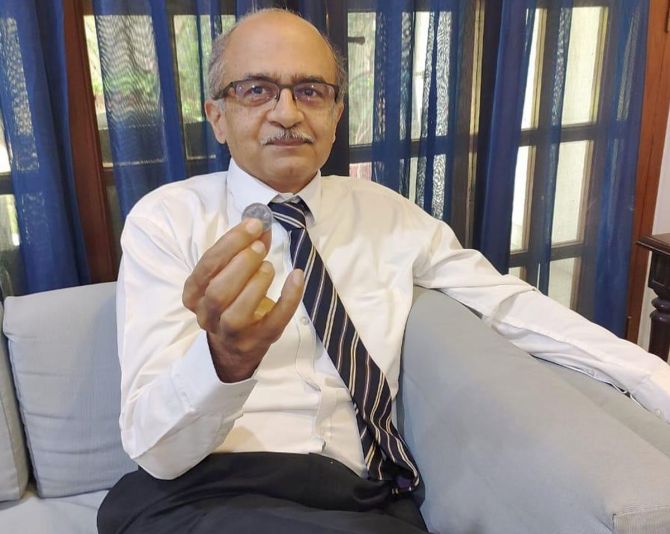 Holding that Bhushan has attempted to "denigrate the reputation of the institution of administration of justice", a bench headed by Justice Arun Mishra ordered that the fine be deposited with the apex court registry by September 15, failing which he would undergo a simple imprisonment of three months and debarred from practising in the apex court for three years.

Bhushan later said he will submit the token fine of Re 1 but also indicated he would file a review plea against the order.

The lawyer told reporters he has the greatest respect for the institution of the Supreme Court and judiciary and that his tweets were not intended to disrespect the apex court.

In its 82-page verdict on the contempt case sentencing, the court said Bhushan's conduct "reflects adamance and ego" which has no place to exist in the system of administration of justice and noble profession, and "no remorse is shown for the harm done to the institution to which he belongs".

"At the same time, we cannot retaliate merely because the contemnor has made a statement that he is neither invoking the magnanimity or the mercy of this court and he is ready to submit to the penalty that can be lawfully be inflicted upon him for what the court has determined to be an offence," it added.

The apex court said there is no doubt that while exercising the right of freedom of speech, fair criticism of system is welcome and judges cannot be hyper sensitive even when distortions and criticism overstep the limit.

"However, the same cannot be stretched to permit to make malicious and scandalous statement. The court has to act only in the case where the attack is beyond a permissible limit, the strong arm of the law strikes a blow on him who challenges the supremacy of the rule of law by fouling its source and stream," it said.

Pronounced by Justice Mishra, who is due to demit office on September 2, the judgment by the three-member bench does not contain the name of the author-judge.

"In our considered view, the act committed by the contemnor (Bhushan) is a very serious one. He has attempted to denigrate the reputation of the institution of administration of justice of which he himself is a part," said the bench, also comprising Justices B R Gavai and Krishna Murari.

"At the cost of repetition, we have to state that the faith of the citizens of the country in the institution of justice is the foundation for rule of law which is an essential factor in the democratic set up."

The apex court on August 14 held Bhushan guilty of criminal contempt for his two derogatory tweets against the judiciary and maintained that they cannot be said to be a fair criticism of the functioning of the judiciary made in public interest.

In its verdict delivered on Monday, the bench noted that on several occasions it had not only given opportunity but also directly or indirectly persuaded Bhushan to express regret in the matter. It said that Attorney General K K Venugopal had also suggested that it was in the fitness of things that a contemnor expresses regret and withdraws the allegation made in the affidavit in reply, which request was not heeded to by the contemnor (Bhushan).

"The contemnor not only gave wide publicity to the second statement submitted before this court on August 24, 2020 prior to the same being tendered to the court, but also gave various interviews with regard to sub judice matter, thereby further attempting to bring down the reputation of this court," the court said.

"If we do not take cognisance of such conduct it will give a wrong message to the lawyers and litigants throughout the country."

"However, by showing magnanimity, instead of imposing any severe punishment, we are sentencing the contemnor with a nominal fine of Re 1," it added.

It said that from the very beginning, the apex court was desirous of giving quietus to this matter and directly or indirectly, Bhushan was persuaded to end this matter by tendering an apology and "save the grace of the institution as well as the individual, who is an officer of the court".

"However, for the reasons best known to him he has neither shown regret in spite of our persuasion or the advice of the Attorney General. Thus, we have to consider imposing an appropriate sentence upon him," it said.

"We are not afraid of sentencing the contemnor either with imprisonment or from debarring him from the practice."

The bench said it cannot accede to the request made by senior advocate Rajeev Dhavan, who appeared for Bhushan, that the August 14 judgement should be withdrawn or recalled.

The bench also noted that Bhushan had tried to justify the averments made on the basis of the unprecedented January 12, 2018 press conference of the four most senior judges of the apex court.

"We hope it was the first and the last occasion that the judges have gone to press, and God gives wisdom to protect its dignity by internal mechanism, particularly, when allegations made, if any, publicly cannot be met by sufferer judges. It would cause suffering to them till eternity," it said.

"Truth can be the defence to the Judges also, but they are bound by their judicial norms, ethics, and code of conduct," it said. 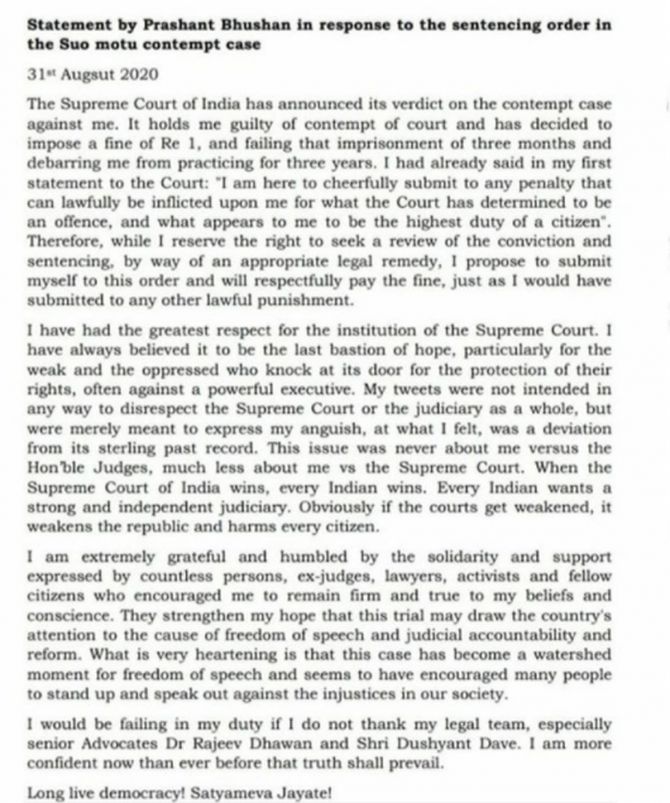 The court said the defence of Bhushan in the matter cannot be said to be either in public interest or bona fide.

At a press conference organised by Campaign for Judicial Accountability & Reforms and Swaraj Abhiyan, Bhushan said his tweets were not intended in any way to disrespect the Supreme Court or the judiciary as a whole, but were merely meant to express his anguish which he felt, "was a deviation from its sterling past record".

"While I reserve the right to seek a review of the conviction and sentencing, by way of an appropriate legal remedy, I propose to submit myself to this order and will respectfully pay the fine, just as I would have submitted to any other lawful punishment," he said.

"I have had the greatest respect for the institution of the Supreme Court. I have always believed it to be the last bastion of hope, particularly for the weak and the oppressed who knock at its door for the protection of their rights, often against a powerful executive," he added.

"What is very heartening is that this case has become a watershed moment for freedom of speech and seems to have encouraged many people to stand up and speak out against the injustices in our society."

Jun 27: Bhushan tweets about undeclared emergency in the country and the role of the Supreme Court and last four chief justices of India.

Jun 29: Bhushan tweets about Chief Justice S A Bobde trying a Harley Davidson super-bike in his hometown Nagpur during the coronavirus outbreak.

Jul 22: SC initiates contempt proceedings against Bhushan after taking note of a complaint filed by a lawyer in this regard; issues notice to him.

Aug 14: SC holds Bhushan guilty of criminal contempt for his both tweets 'against the judiciary'.

Aug 24: Bhushan files a response refusing to apologise to the SC while hearing argument of point of quantum of sentence.

SC once again asks Bhushan to apologies. He refuses.

Aug 31: SC imposes fine of Re 1 on Bhushan, to be paid by September 15; default to lead to 3-month-jail term, debarment from practice in the apex court for 3 years. 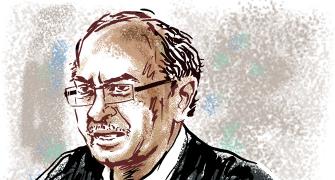 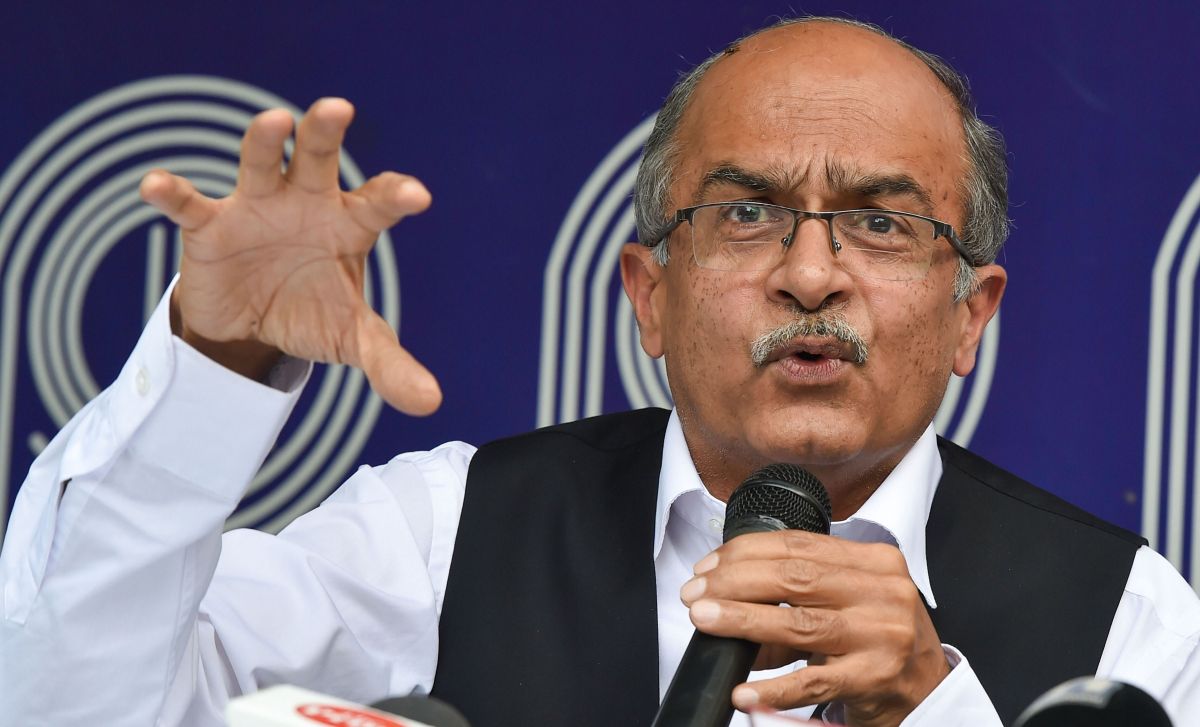