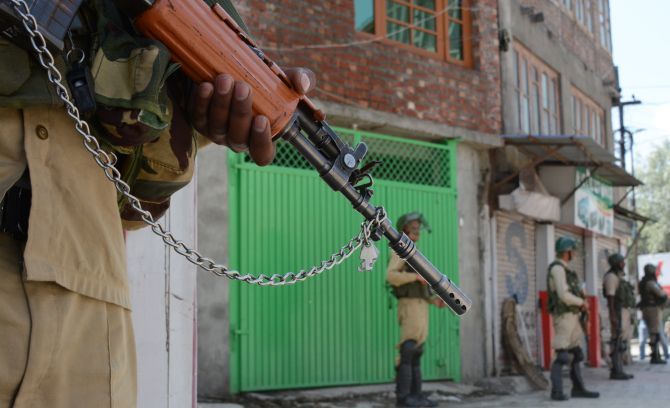 The Supreme Court on Monday asked the Centre and Jammu and Kashmir administration to make all endeavours to restore normalcy in Kashmir Valley as soon as possible but made it clear that the restoration would be on a 'selective basis' keeping in mind national interest.

A bench headed by Chief Justice Ranjan Gogoi and comprising justices S A Bobde and S A Nazeer, was told by Attorney General K K Venugopal about steps taken by authorities to restore normalcy in the state.

The apex court asked Venugopal to file an affidavit indicating steps taken so far in the matter.

When the top court was told about the alleged 'shutdown' of mobile and Internet services in Kashmir Valley, the bench said these issues could be dealt with by the Jammu and Kashmir high court.

"Is it the same situation today? We are saying that if it is some local issue then it would be better if the high court dealt with it. It is simpler for the high court to know what is happening in the state in terms of the shutdown of mobile and Internet services," the bench said.

Advocate Vrinda Grover, appearing for petitioner and Executive Editor of Kashmir Times Anuradha Bhasin, told the bench that mobile, Internet services and public transport are not working in the Kashmir Valley and it would be difficult for them to approach the high court.

While Bhasin has sought removal of restrictions imposed on working of journalists in the state after scrapping of provisions of Article 370, some other petitioners have raised the issue of shutdown of public transport and lack of medical facilities in Kashmir.

Venugopal, however, said that issues raised by the petitioner 'do not appear to be genuine' as Kashmir-based newspapers are being published and the government has been offering all kinds of assistance to them.

"It is not about just one or two newspapers. They are saying that there is general communication shutdown. We would like to know whether it is a breakdown or shutdown and for what reasons," the bench observed.

Venugopal told the bench that a media centre has been set up in Srinagar where Internet and phone facilities are being provided for scribes from 8 AM to 11 PM and movement passes and vehicles are also being provided to journalists to enable them to do their work.

"You put in these things in an affidavit," the bench told Venugopal, adding, "In the meantime, we trust you (government) that you will try to restore the services and normalcy".

Solicitor General Tushar Mehta, appearing for J&K, told the bench that 'not a single bullet has been fired after August 5 in the state'.

Venugopal said that 5,292 security force personnel have lost their lives in such incidents.

When some other petitioners raised the issue of alleged lack of medical facilities in Kashmir, Venugopal said around 10.52 lakh patients were attended to in hospitals in Out Patients Department (OPD) in the valley from August 5 to September 15.

Mehta said that in the Kashmir division, restrictions have been lifted in 93 out of a total of 105 police stations which comes to 88.06 per cent.

He said restrictions have been lifted 100 per cent in Jammu and Ladakh divisions.

Mehta said there was no scarcity of medicines in the state and a three month stock of essential commodities is already there.

"The picture presented before the court is wrong," he said.

After the bench said that both the Centre and state should ensure restoration of normalcy, Mehta said, "This direction can be misused elsewhere, not inside the country but outside."

To this, the bench said, "We are not issuing any direction. We have said that restoration will be on a selective basis keeping in mind the national interest".

The Supreme Court also agreed to entertain a petition filed by the Jammu and Kashmir People's Conference (JKPC) challenging the President's Rule imposed in the state and abrogation of provisions of Article 370, which gave special status to the state.

The three-judge bench tagged the petition filed by JKPC along with petitions which have been referred to a five-judge Constitution bench for examining the legal validity of the Presidential order on abrogation of Article 370 from the state.

However, the bench declined to entertain other fresh petitions on the issue of scrapping of Article 370.

The bench said it is not going to multiply the petitions on the issue of Article 370.

It said people who want to argue on the issue can file impleadment application.

"We are examining the validity of the legislative action," the bench said while referring to several petitions which have been referred to the Constitution bench and fixed for hearing in first week of October.

When the counsel appearing for the JKPC pleaded for entertaining its petition, the bench said, 'you should have come to this court earlier'.

While challenging the Centre's decisions to scrap provisions of the Article 370 that accorded special status to Jammu and Kashmir, and dividing it into two Union Territories, the JKPC has sought a direction to declare the state reorganization act and the presidential orders as 'unconstitutional and void'.

The JKPC is the second party after the National Conference (NC) which has mounted a legal challenge in the apex court to the changes made in the Constitutional status of the state.

The NC petition has been filed by Mohammad Akbar Lone and Justice (retd) Hasnain Masoodi, both Lok Sabha members belonging to the party.

Massodi had ruled in 2015 that the Article 370 was a permanent feature of the Constitution.

The JKPC, in its plea, also submitted that the Jammu and Kashmir governor has kept the entire nation in the dark. The country was not informed that such a drastic action against the interest of the state was being taken, it submitted.

The party also challenged the Jammu and Kashmir Reorganization Act passed by Parliament and said, "The entire state particularly the valley was put under curfew and then only those CO's were passed and the impugned legislation was enacted,."

"Never ever in the history of the nation reorganization under Article 3 has taken place which shows a blatant attack on our Constitution and the freedom of people of a state," it submitted.

The party said Jammu and Kashmir had a separate Constitution and Parliament had a limited scope to enact legislation for the state. Therefore by a parliamentary act, the powers given to the state by its own Constitution could not have been abrogated by merely taking away Article 370 by the impugned legislation, it said.

October 31 happens to be the birth anniversary of the country's first home minister Sardar Vallabhbhai Patel, who was instrumental in the merger of about 565 princely states with the Union of India following Independence.