With Bombay high court granting bail to Aryan Khan in the drugs-on-cruise case, the legal team of lawyer Satish Maneshinde who represented him in the matter, said there was 'no possession, no evidence, no consumption, no conspiracy, right from the first moment when he was detained on October 2'. 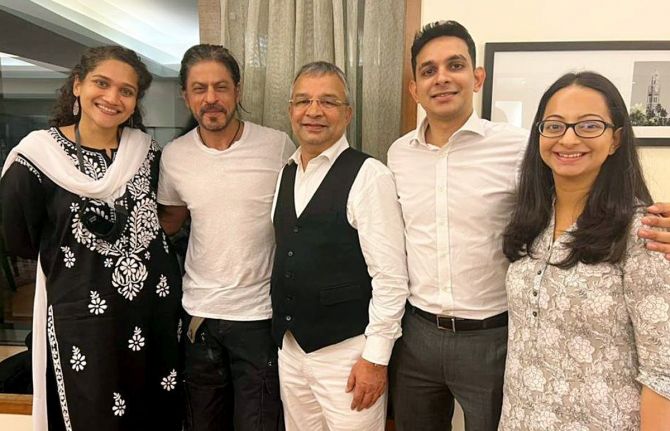 IMAGE: Bollywood actor Shah Rukh Khan with lawyer Satish Maneshinde and other members of the legal team that represented his son Aryan Khan in drugs-on-cruise case, in Mumbai on Thursday. Photograph: ANI Photo

Expressing its happiness over the verdict, the team said 'Satyameva Jayate'.

'Aryan Khan has ultimately been released on bail by Bombay HC. No possession, no evidence, no consumption, no conspiracy, right from the first moment when he was detained on Oct 2! Satyamev Jayate,' the team said.

The court on Thursday granted bail to Aryan, Arbaaz Merchant and Munmun Dhamecha.

Aryan is lodged at the Arthur Road Jail along with Arbaaz Merchant while Munmun Dhamecha is at Byculla women prison.

Aryan Khan was arrested on October 3.

A Narcotics Control Bureau (NCB) team busted an alleged drugs party on the Cordelia Cruise ship which was on its way to Goa on October 2.

A total of 20 people were arrested in the case. 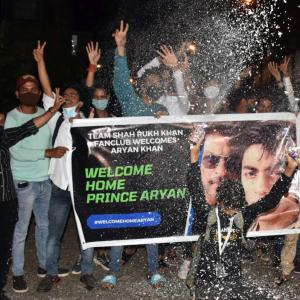