Rajya Sabha was on Monday adjourned for the day amid uproar by opposition members over suspension of eight MPs, including Trinamool Congress leader Derek O'Brien and Sanjay Singh of Aam Aadmi Party, for the remaining part of the Monsoon session over their "unruly behaviour" during the passage of farm bills on Sunday. 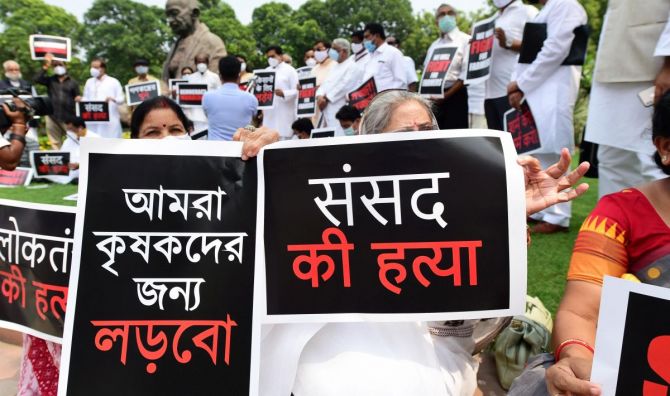 IMAGE: Jaya Bachchan of Samajwadi Party and members of other opposition parties take part in a protest over suspension of eight Rajya Sabha members during the ongoing Monsoon Session of Parliament. Photograph: Kamal Kishore/PTI Photo

The proceedings of the House were almost washed out as it could not take up any legislative business.

After four adjournments earlier, when the Upper House resumed at 12 pm, Bhubaneswar Kalita, who was in the Chair drew the attention of the House to Rule 256 saying, "The Chairman may, if he deems it necessary, name a member who disregards the authority of the chair or abuses the rules of the Council by persistently and wilfully obstructing the business thereof" and mentioned Rule 256 (2) also.

"I want to draw your kind attention to these two rules ... I have to call the LoP (Leader of Opposition) to speak but before that I want the rule to be obeyed. I want honourable members who have been named to go out of the House so that honourable LoP can speak and I want order in the House," Kalita said urging the suspended members to leave.

The House witnessed four adjournments with the first adjournment till 10 am. However, some of the members had managed to raise issues during Zero Hour.

Earlier in the day, Chairman M Venkaiah Naidu termed the behaviour of members during the passage of the bills on Sunday as "very unfortunate, unacceptable and condemnable" and one that has "tarnished" the image of Parliament, particularly the House of Elders.

Two key farm bills were on Sunday passed by Rajya Sabha with voice vote amid unprecedented unruly scenes by protesting opposition members who were demanding that the proposed legislation be referred to a House panel for greater scrutiny.

Earlier in the day, the government had moved a motion seeking suspension of eight MPs.

Amid opposition, the motion was adopted by voice vote and the Chairman asked them to leave the House but they remained present and protested against the ruling.

Naidu called for taking up of call attention motion on GST compensation to states where O'Brien, Ragesh and Kareem were listed as movers.

But with members protesting, he moved on to the next listed business saying they were not interested.

As the protests continued, he adjourned the proceedings for 20 minutes. The House saw three more adjournments as the suspended members remained present in the House and opposition parties protested against the decision before adjournment for the day. 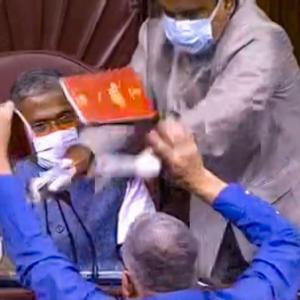 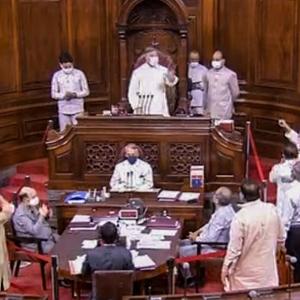