Eight opposition MPs in Rajya Sabha, including Trinamool Congress leader Derek O'Brien and Sanjay Singh of Aam Aadmi Party, were suspended on Monday for the remainder of the Monsoon session for 'unruly behaviour' during the passage of two farm bills, prompting the suspended leaders to go on an indefinite sit-in inside Parliament complex. 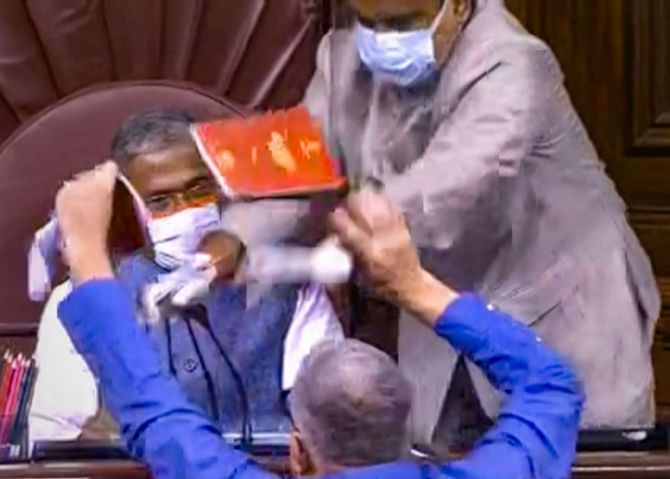 A motion for the suspension of the eight leaders -- Rajeev Satav, Syed Nasir Hussain and Ripun Bora (all Congress), Dola Sen and O'Brien (TMC), KK Ragesh and Elamaram Kareen (both Communist Party of India-Marxist), and Singh, was moved by the government and approved by a voice vote in the House.

This came after Chairman M Venkaiah Naidu rejected a notice for a no-confidence motion against Deputy Chairman Harivansh as it was not in proper format and did not give a 14-day notice period.

The Monsoon session is scheduled to end on October 1.

However, the session is likely to be curtailed with several MPs testing positive for the coronavirus.

Opposition members, objecting to the manner in which the two farm bills were being passed, had on Sunday stormed the well of the House and when their demand for voting wasn't met, they tore papers, climbed on tables, shouted slogans, and allegedly threw the rule book at Harivansh, who was presiding at that time.

Condemning their behaviour, Naidu said Harivansh had later informed him that he was 'abused with objectionable words' and 'would have been harmed also'.

Opposition parties hit out at the government over the suspension of the eight Rajya Sabha MPs and sat in for an 'indefinite' protest on Parliament premises against the move.

Carrying pillows and blankets at the protest site, the eight MPs shouted slogans and even broke into songs as they protested in front of Mahatma Gandhi's statue in Parliament complex.

"We will not budge," they asserted.

"Suspension won't silence us. We will stand with farmers in their fight. The (Rajya Sabha) deputy chairman throttled parliamentary procedures yesterday," said CPI-M MP Elamaram Kareem, who is among those suspended.

"Suspension of MPs exposed the coward face of the BJP. People will see through the attempt to divert attention from their undemocratic actions," he said.

Sources said the suspended members cannot attend House proceedings as well as parliamentary committee meetings, but there is no bar on them to enter the Parliament complex and hold a peaceful protest.

Opposition parties like the Congress, CPI-M, Shiv Sena, Janata Dal-Secular, TMC, Communist Party of India, and the Samajwadi Party also protested in Parliament premises carrying placards with messages such as 'Murder of Democracy', 'Death of Parliament' and 'Shame, shame'.

Soon after the Zero Hour, Naidu said he was 'pained' at the happenings during the passage of The Farmer's Produce Trade and Commerce (Promotion and Facilitation) Bill, 2020, and the Farmers (Empowerment and Protection) Agreement of Price Assurance and Farm Services Bill, 2020.

"Is it parliamentary standard," he asked and told members to do some introspection.

Meanwhile, the government accused opposition leaders of irresponsible conduct in the Rajya Sabha during the passage of the farm bills and said they violated rules by not vacating the House despite being suspended.

Union minister Ravi Shankar Prasad said the conduct of opposition leaders in the Upper House was 'shameful' and 'irresponsible'.

"We had a clear majority in Rajya Sabha on farm bills," he said, adding that 110 members supported the bills and a little over 70 opposed it.

According to sources in government, there have been at least ten instances when members have been suspended from Rajya Sabha during the tenure of Congress-led governments.

The Congress termed 'undemocratic' and 'one-sided' the suspension of the eight MPs, with Rahul Gandhi saying the 'muting of democratic India' continues by initially silencing and later suspending the parliamentarians.

The party's leader in the Lok Sabha Adhir Ranjan Chowdhury and its chief spokesperson Randeep Surjewala also spoke on the issue.

Referring to the passage of the farm bills in the Upper House, the Congress leaders addressed a press conference outside Parliament, accusing Harivansh of acting at the behest of the Prime Minister's Office (PMO).

The TMC also denounced the suspension of eight Rajya Sabha MPs, with its leader and West Bengal Chief Minister Mamata Banerjee calling the action reflective of the "autocratic mindset" of the government.

Accusing the Bharatiya Janata Party of killing democracy, the Trinamool Congress chief declared she will fight the 'fascist' government in Parliament and on streets.

Banerjee also spoke to the eight suspended MPs and lauded their efforts towards 'upholding the values of Parliament'.

The Left parties also alleged that the government was trying to silence the Opposition by suspending the MPs who questioned it on the farm bills, and called on the President to send the legislation back to the Rajya Sabha.

In a joint press statement, the CPI-Marxist, CPI, Communist Party of India-Marxist-Leninist, Revolutionary Socialist Party and All India Forward Bloc said they will support the countrywide protest against the farm bills on September 25.

Upping the ante on the farm bills issue, the Congress announced a massive people's movement which would include protest marches, agitations and collecting two crore farmers' signatures for a memorandum against the legislations to be submitted to President Ram Nath Kovind. 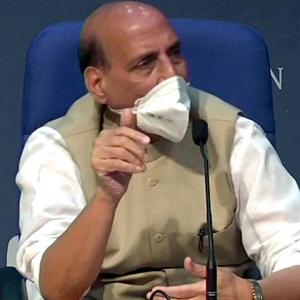