'Why should we disclose how and from where we will get these numbers?'
Rediff.com's Prasanna D Zore reports. 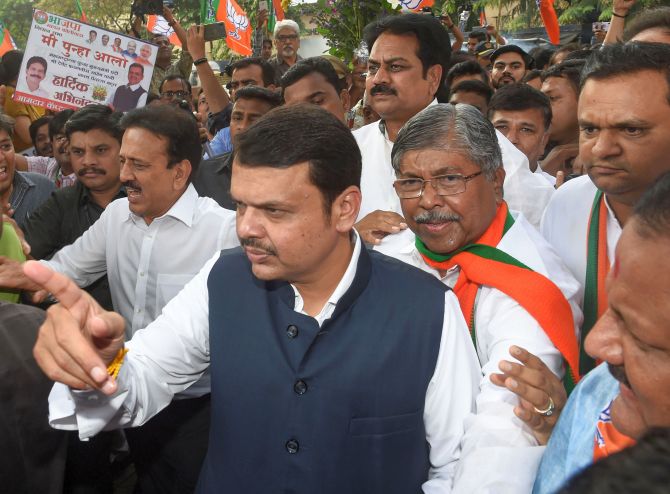 Even as the Shiv Sena, the Nationalist Congress Party and the Congress are tightening the ring around their elected MLAs, the Bharatiya Janata Party has tasked former heavyweights from these very parties, who joined the saffron party recently, to help it cobble the numbers required to prove the majority on the floor of the Maharashtra assembly.

Boosted by NCP leader Ajit Pawar's defection, the BJP has handed over the task of getting the support of additional MLAs it needs by November 30 -- it has 105 MLAs and the reported support of around 15 Independents MLAs -- to former heavyweights who once held important positions in the Shiv Sena, NCP and Congress.

Maharashtra Governor Bhagat Singh Koshyari has given Chief Minister Devendra Fadnavis time till November 30 to prove his majority in the House.

Narayan Rane, Ganesh Naik and Radhakrishna Vikhe-Patil, a state BJP leader revealed, will oversee 'Operation Lotus' that will see, claims the party confidently, the Fadnavis government prove its majority in the house.

"Having held crucial positions in their respective parties, these leaders have very cordial and business-like relationships with lots of MLAs from the Sena, NCP and Congress," the BJP leader said.

Rane, once the Shiv Sena's chief minister, crossed over to the Congress in 2005 and was Maharashtra's revenue minister in the Congress-NCP government.

He joined the BJP this year along with son Nitesh Rane who won the assembly election from Kankavli in the Rane family's home turf of Sindhudurg.

Radhakrishna Vikhe-Patil, the former Congressman with a large support base in Ahmednagar district, was Maharashtra's education and transportation minister in the Congress government headed by Ashok Chavan and more recently was its Leader of the Opposition in the assembly.

Ganesh Naik, a former Shiv Sainik with a mass following in Navi Mumbai, crossed over to Sharad Pawar's NCP in 1999 and had been minister of labour, excise and environment in the Congress-NCP alliance government between 2009-2014.

He too joined the BJP before the 2019 assembly election.

The BJP leader said the party is banking on these three political heavyweights's influence over a large swathe of MLAs from the Sena, NCP and Congress to get the numbers if and when the Fadnavis government proves its majority in the assembly.

Refusing to get into the details of how many MLAs from which party he has been in touch with to convince them to vote for the Fadnavis government, Rane said, "I can't disclose anything at this stage, but rest assured we will get the support of 160-170 MLAs soon."

"If I let the cat out of the bag these people (political parties) will take more precautions to thwart our plan. How will we get them then?" Rane asked.

"Do you really think we can't get in touch (with the MLAs) if they are in hotels?" Rane reacted when asked how he could be in touch with the MLAs belonging to the three parties when they are being closely guarded in different hotels in Mumbai.

Ashish Shelar, the BJP's MLA from Bandra West, north west Mumbai, too claimed that the BJP will get the support of 160 MLAs.

"Why should we disclose how and from where we will get these numbers?" he asked.

"Wait till November 30 and the people of Maharashtra will know," Shelar said. 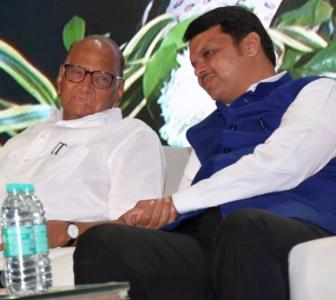