A day after the poll results in Maharashtra, where the Bharatiya Janata Party put up a below-par performance, the Shiv Sena on Friday took a dig at its senior ally, saying there was no "maha janadesh" and the outcome was in fact a rap on the knuckles for those high on "arrogance of power". Chief Minister Devendra Fadnavis had toured over 200 constituencies, out of the total 288, during his 'Maha Janadesh Yatra' (massive mandate march) ahead of the October 21 polling. On the eve of results on October 24, Fadnavis had talked about the saffron alliance winning 200-plus seats.

In an editorial in its mouthpiece ‘Saamana’, the Sena, which also saw a drop in its 2014 tally, said the mandate has rejected the notion that elections can be swept by engineering defections and splitting opposition parties.

Analysing the poll results, which saw main opposition parties -- the Nationalist Congress Party and Congress improving their tally, the editorial said the outcome shows opponents can't be finished in politics.

The Marathi daily said the "BJP broke the NCP" in such a manner in run-up to elections that people wondered if the Sharad Pawar-led party had any future.

"But the NCP bounced back crossing the 50-seat mark, while a leaderless Congress won 44 seats. The results were a warning to rulers not to show arrogance of power... it’s a rap on their knuckles," said the Uddhav Thackeray-led party.

"Twenty-five seats have gone to other smaller parties. This shows people have said beware... if you show arrogance of power," the editorial said.

The polls did not deliver "maha janadesh" (massive mandate), the newspaper said.

The Sena said the mandate has rejected the BJP's thinking that elections can be swept by engineering defections and splitting opposition parties.

People have also taught a lesson to turncoats, it said, referring to large-scale desertions from the NCP-Congress to the ruling camp.

Referring to the shock bypoll defeat of Udayanraje Bhosale, who defected to the BJP after winning the Satara Lok Sabha seat on NCP ticket in May, the Sena said "the Satara "gaadi" (seat of power) has respect because of Chhatrapati Shivaji Maharaj.

The people of Satara, where bypoll was held along with assembly elections, have shown they will not allow political opportunism in the name of Shivaji Maharaj, the editorial said.

This is a personal defeat of Bhosale, a direct descendant of the legendary 17th century Maratha warrior king, the party said.

The editorial wondered how the NCP-Congress got so many seats despite the BJP and the Shiv Sena firming up a pre-poll alliance.

"Chief Minister Fadnavis declared that since Udayanraje is now in the BJP, Chhatrapati Shivaji's blessings are with the BJP. Still Satara defeated Udayanraje," it said.

"There is a lesson to be learnt from this defeat (in Satara, where the NCP won). Fadnavis said he was a powerful wrestler but Sharad Pawar proved more powerful.

"Maharashtra doesn't accept arrogance of power," the editorial said and added, "Our feet were always on the ground."

The BJP-Sena combine bagged around 160 seats in Maharashtra, way below their expectation of crossing the 200-mark. 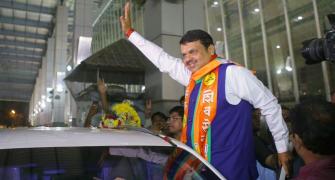 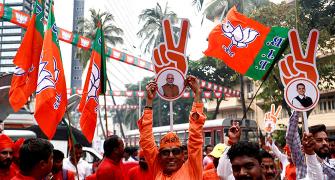 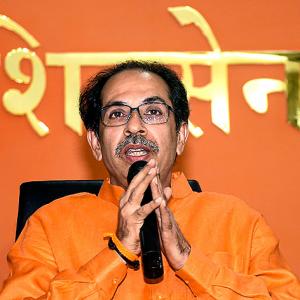