Restrictions in Kashmir may be relaxed to facilitate Eid celebration The Centre may give some relaxation to the people in the Kashmir Valley, where restrictions have been imposed, so that they can participate in Eid-ul-Zuha on August 12, officials said on Wednesday.

However, it is immediately not clear whether the relaxation will be given fully or partially.

Jammu and Kashmir Governor Satya Pal Malik on Wednesday reviewed the law and order scenario in the state and was informed that the overall situation was satisfactory.

Malik said that Rs 1 lakh each has been given to designated liaison officers for organising Eid festivities for students from the state who are studying in other states and are unable to come home on the occasion amid security clampdown in the Valley.

In the meeting held at Raj Bhavan, Malik passed directions for setting up telephone lines in deputy commissioners' offices for students to talk to their families back home.

After taking stock of law and order status and provision of basic services and essential commodities to people, the Governor reviewed arrangements for enabling people to perform Friday prayers and for the celebration of Eid-ul-Zuha in the coming week.

The officers present in the meeting told Malik that to facilitate people for buying animals on the occasion of Eid, mandis will be set up at different locations in the Valley and ration shops, grocery and medicine stores have been asked to remain open on this occasion.

In the meeting, the governor reviewed the law and order situation following the abrogation of provisions of Article 370 and proposed bifurcation of the state into two union territories, a Raj Bhavan spokesperson said.

He said emergency services in hospitals were functioning, people were seen in markets buying daily provisions and electricity and water supply was also satisfactory.

There is sufficient availability of essential supplies, the spokesperson said.

The governor was informed that the overall situation in the state was satisfactory, with no untoward incident being reported from anywhere, he said.

The governor directed deputy commissioners of districts in the valley to depute their staff to visit different localities, take stock of requirements of people and address them swiftly.

He reiterated his concern for ensuring safety of general public and advised his administration to give due consideration to genuine needs of the people.

The governor also said that if tourists and other people in Kashmir feel any kind of distress they should contact the nearest police station or go to the magistrate of the area.

He issued directions to extend every possible help to tourists and people in case of need, the spokesperson said.

Advisor K K Sharma has been deputed by the governor to take stock of situation in Jammu region, he said.

The restrictions were imposed before the government's move to abrogate provisions of Article 370 that gave special status to Jammu and Kashmir, and bifurcation of the state into union territories.

The government is trying to work out plans for some relaxation in the restrictions imposed in the Kashmir Valley so that people can take part in Eid-ul-Zuha, an official said.

The government, however, may not immediately release the arrested leaders -- former chief ministers Omar Abdullah and Mehbooba Mufti -- who were lodged in guest houses.

The leaders can only be released after reviewing the law and order situation in Kashmir the coming days, another official said.

The Bharatiya Janata Party-led government's bold move to revoke the special status of Jammu and Kashmir and bifurcate the state into union territories -- Jammu and Kashmir, and Ladakh -- secured Parliament's approval on Tuesday with the Lok Sabha passing the new measures with an over two-third majority.

The Rajya Sabha gave its approval to the resolution on Monday.

Defending the government's action to put restrictions in the Kashmir Valley, Home Minister Amit Shah on Tuesday said in the Lok Sabha that the law and order situation there had not deteriorated and whatever actions were taken were all precautionary.

The government move to revoke some provisions of Article 370 is a bold and far-reaching decision that seeks to redraw the map and the future of a region at the centre of protracted militancy.

Fulfilling an electoral promise of the BJP less than 90 days after the Modi 2.0 government took power, Shah had announced the decision in the Rajya Sabha, which approved both the resolution and the Jammu and Kashmir Reorganisation Bill. 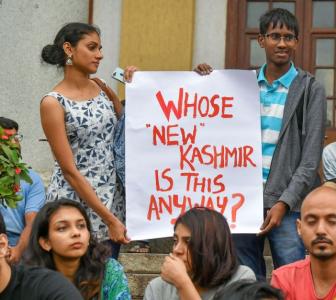