If the apex court agrees to hear the petitions challenging the removal of Article 370, it would be interesting to see if there is an immediate status quo on further proceedings or if it will decide after hearing all the petitions, reports Aashish Aryan. 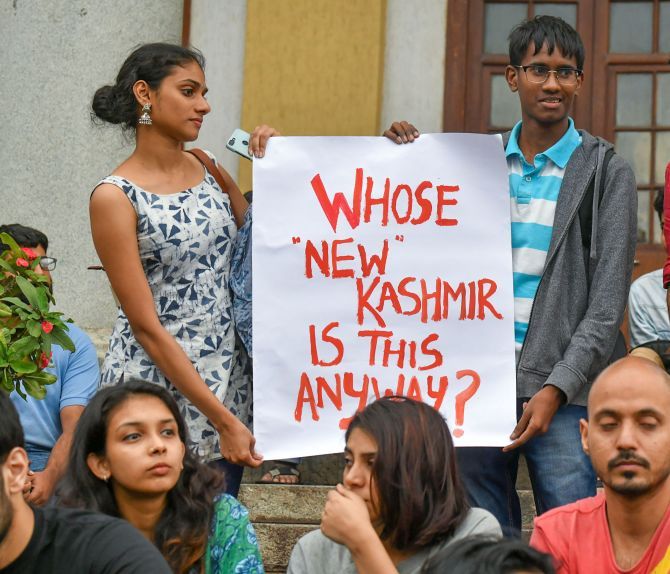 IMAGE: Activists of various organisations in Bengaluru display placards during a protest against the government's move to revoke Article 370 in Jammu Kashmir. Photograph: Shailendra Bhojak/PTI Photo

The Bharatiya Janata Party-led central government on Monday moved a resolution in the Rajya Sabha to abrogate Article 370 of the Constitution, which gave special status to the state of Jammu and Kashmir.

The political tug-of-war on the issue aside, there is also speculation that the BJP’s move to delete Article 370 could be challenged legally in the Supreme Court.

The government’s decision to amend Article 367 to replace the constituent assembly with the legislative assembly could also come under challenge.

If the apex court agrees to hear the petitions challenging the removal of Article 370, it would be interesting to see if there is an immediate status quo on further proceedings or decide on it after hearing all the petitions.

The decision of the government flies in face of a 2016 judgment by a two-judge apex court Bench of (retired) Justice Kurian Joseph and Justice Rohinton Fali Nariman, which had held that the provision had over the years acquired permanent space in the Constitution and could not be abrogated now.

In the judgment, the two-judge bench had said though it can be noticed in the marginal note states that Article 370 is a temporary provision with respect to Jammu and Kashmir, unlike Article 369, which is also a temporary provision limited in point of time to five years from the commencement of this Constitution, no such limit is to be found in Article 370.

“Having regard to all these factors, this court clearly held that though the marginal note refers to Article 370 as only a temporary provision, it is in fact in current usage and will continue to be in force until the specified event in sub-clause (3) of the said Article takes place,” the two-Judge Bench had then held.

The view of the top court was reiterated in a 2018 observation of a two-judge bench of (retired) Justice A K Goel and Justice Nariman, which held that the provision could not be scrapped now.

Apart from the cases and the decisions taken by the apex court, the Delhi high court had in 2017 also dismissed a plea moved by Kumari Vijayalakshmi Jha, who had alleged that continuance of Article 370 was a “continuing fraud” being played upon the citizens of the country.

The high court had then cited the apex court’s 2016 judgment and dismissed the petition.

Jha had subsequently challenged the high court’s decision before the SC, where the matter is still pending.

Bharatiya Janata Party leader Ashwini Upadhyay had also moved a similar petition before the top court in January this year with a plea that the special provision of Article 370 was "temporary" in nature at the time of framing of the Constitution, and thus must be struck off.

The top court had then ordered tagging of his matter with other pending cases on the issue.

With Article 370 now gone, these cases are now likely to be dismissed as infructuous. 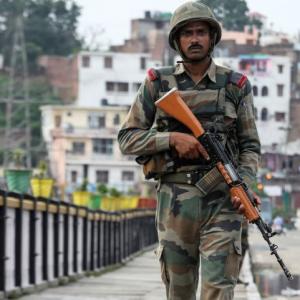