News
Business
Movies
Sports
Cricket
Get Ahead
Money Tips
Shopping
Sign in  |  Create a Rediffmail account
Rediff.com  » News » Arnab has 82% stake in Republic TV, no word on who owns rest

Arnab has 82% stake in Republic TV, no word on who owns rest Renowned journalist and broadcaster Arnab Goswami personally owns over 82 per cent stake in Republic TV, the company that runs one of the country's most-watched news channels, said on Wednesday, clearing the air around its ownership.

In a statement, Republic Media Network said Goswami holds over 82 per cent of ARG Outlier Media Pvt Ltd -- the firm that owns and operates Republic TV.

His company also owns 99 per cent equity in the downstream digital entity that controls the digital assets of the network.

Without disclosing other shareholders, Republic Media Network said the statement was being issued to "clarify the details of its promoter shareholding" in view of "misleading" media reports making "false and mala fide claims about the exact ownership of the consolidated network."

It said Goswami through his personal investment and family owned around 84 per cent shareholding in ARG Outlier Media Pvt Ltd at the time of launch of the English news channel Republic TV in 2017.

"After the initial capital raise to fund the launch of the English channel, Mr Arnab Goswami raised further capital for expansion through a small equity raise, in February 2019, and since then continues to hold over 82 per cent of ARG Outlier Media Pvt Ltd," it said without giving details.

Also, "his company of which he is sole promoter, owns 99 per cent equity in the downstream digital entity that controls the digital assets of the network under the URL www.republicworld.com."

The company said Goswami's three legal and corporate entities are all registered in India. "His present controlling equity of 82%-plus makes him one of the largest individual shareholders in the Indian news media landscape and the first journalist to achieve this feat."

Goswami, one of India's most recognised news anchors, set up the Republic Media Network in 2017 with some backing from Rajeev Chandrasekhar, who at that time was an independent member of Parliament but later joined the Bharatiya Janata Party and resigned from the board of the company in 2018.

On the second anniversary of the channel, Goswami in May last year bought a chunk of shares held by the Rajeev Chandrasekhar-promoted Asianet News Media & Entertainment to gain near full ownership, Asianet had said last year.

Neither the consideration nor the quantum of stake sold in May 2019 was disclosed by either of the companies.

After the share buyback by Goswami, who is managing director and editor-in-chief of Republic TV, Asianet became a minority investor in the firm. Asianet was previously classified as a significant shareholder in the news channel.

At that time, it was stated that the buyback of shares by Goswami will make Republic Media Network a completely editor-controlled company.

Asianet News had at the time of selling shares to Goswami stated that Republic TV's valuation was about Rs 1,200 crore following the transaction.

After quitting Times Now as editor-in-chief in October 2016, Goswami had announced his new media venture, named Republic, which was launched in May 2017. It has topped the rating chart since its debut. 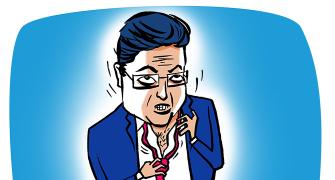