Months after India and the United States signed a key logistics pact, Reliance Defence and Engineering on Monday announced an agreement with the American Navy for repair and alteration services for warships of the largest forward-deployed Seventh Fleet operating in the region. 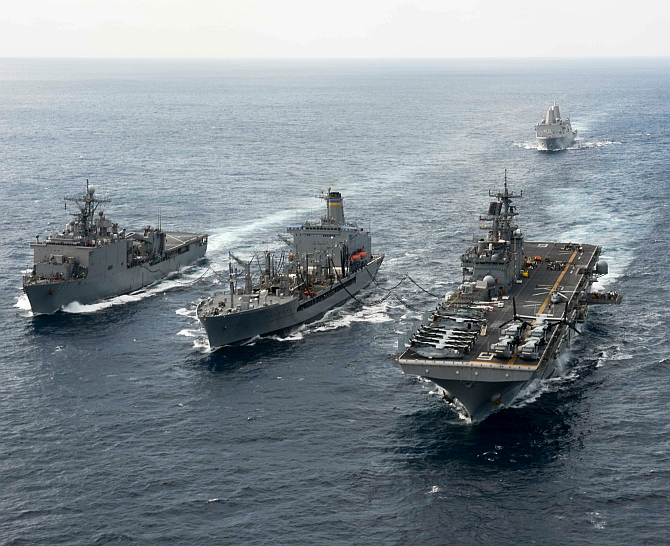 The Seventh Fleet's area of responsibility includes the Western Pacific and Indian Ocean and at any given time there are roughly 50­70 ships and submarines, 140 aircraft and approximately 20,000 sailors under its command.

A statement by the Reliance Infrastructure (RInfra) controlled RDEL said it has signed the Master Ship Repair Agreement with US Navy.

It added that earlier in January, Reliance Shipyard was qualified by US Navy as an approved contractor to perform complex repair and alteration services for the US Navy's Seventh Fleet vessels operating in the region.

Reliance Shipyard at Pipavav, Gujarat is the first shipyard in India to have received MSRA Certification to undertake servicing and repairing works for the vessels of the Seventh Fleet.

It is estimated that the potential business for RDEL will be very high.

The fleet has about 100 vessels of different types, including auxiliaries. Currently, the vessels of US Navy's Seventh Fleet visit Singapore or Japan for such works.

Reliance Shipyard has been selected after a detailed site survey by US government representatives in end October 2016, the statement said.

After over a decade of negotiations, India and the US had in August last year signed the Logistics Exchange Memorandum of Agreement, a tweaked India-specific version of the Logistics Support Agreement (LSA), which the US has with several countries with close military-to-military ties.

The pact enables their militaries to use each other's assets and bases for repair and replenishment of supplies, making joint operations more efficient.

LEMOA facilitates the provision of logistical support, supplies and services between the US and Indian militaries on a reimbursable basis and provides a framework to govern them.