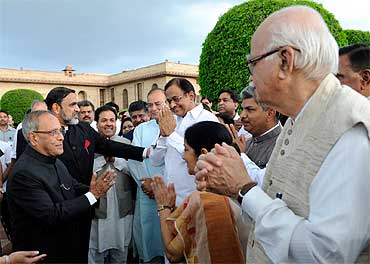 "Ramdev, a tiger?" asks the Opposition Stalwart whose public persona is usually grim and unsmiling. "Ramdev is like Salman Khan. Paanch din mein kama le, chale gaya (he came, created a stir for five days, and went away).

A day after he ended his fast, the yoga guru's shadow hangs over President Pranab Mukherjee's first At Home, the tea party the First Citizen hosts every Independence Day and Republic Day.

Guests congratulate Delhi Police Commissioner Neeraj Kumar for his careful handling of the situation and not allowing it to get out of control as many observers had feared.

Neeraj Kumar's Mumbai counterpart Arup Patnaik does not attract similar praise from one of the nation's top mandarins. "We had given the Maharashtra government all the information," insists the senior official, referring to the hour-long Mumbai riot of August 11. "We had told them what would happen, how it would happen It was a failure of anticipatory policing."

When this Mumbaikar points out that Patnaik may have averted an even uglier situation by forbidding his subordinates from opening fire on the rampaging mob, the mandarin conceded that the Mumbai police commissioner had been wise in the post-riot situation, but felt that the riot could have been averted given the information available.

Unlike his immediate predecessors -- even the approachable A P J Abdul Kalam -- who were separated from their guests by a thick rope, this President refuses to be bound by protocol and plunges into the crowd, greeting folks with his trademark quick namaste.

Guests are also permitted -- unlike earlier At Homes -- to queue up and enter the Hallowed Quarter to greet the President, the First Lady, the vice-president, the prime minister, Gursharan Kaur and Sonia Gandhi.

Also seated in the HQ, which is sequestered from all the other guests are Lok Sabha Speaker Meera Kumar and her husband, Vimla Sharma, the late President Shankar Dayal Sharma' wife, and another lady whose identity this reporter could not ascertain. 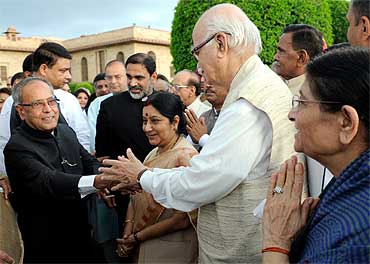 The controversy over Rashtrapati Bhavan not providing chairs to L K Advani and the Marshal of the Air Force Arjan Singh not withstanding, one spots chairs at the rim of the special guests enclosure for elder guests.

It is unlikely Mr Advani, who at 83 prides himself on being fit and ready to lead this country, or Marshal Arjan Singh, who at 93 stands ramrod erect when greeting the Supreme Commander of the armed forces -- as the Indian defence forces's only five star officer, a position he will hold all his life, the man who led the IAF to a memorable triumph in the 1965 war, stands at the head of the line of service chiefs when greeting the Rashtrapati -- would have accepted a chair.

Seated in the enclosure are three veterans -- Air Chief Marshal O P Mehra, Admiral R H Tahiliani, better known to this generation as designer Tarun Tahiliani's dad, and Lieutenant General J F R Jacob, one of the real heroes of the 1971 war, without whose aggressive intervention the Indian Army would probably have not taken Dhaka.

General Jacob, who is 88, greets guests with a smart salute and one believes it is time India honours this great soldier with at least a Padma Vibhushan before it is too late.

Arun Jaitley has a memory like Sunil Gavaskar. India's greatest batsman can recall a face and name even if he hasn't met me in ten years, as does the Leader of the Opposition in the Upper House.

When I last met Mr Jaitley in June 2000, he recalled when we had last met, a 1988 memorable encounter I had forgotten even though it was the only time I ever spoke to Ram Nath Goenka.

When my legendary colleague Sheela Bhatt introduces me to Mr Jaitley on the Rashtrapati Bhavan lawns last Wednesday, he is quick to point out that I have put on weight even though it is 12 years since I last saw him in his ministerial office with the irrepressible Kanchan Gupta.

Mr Jaitley, who is congratulated by several guests at the At Home for his speeches in the Rajya Sabha, has an interesting take on India's Olympic performance, which he believes, can take off if handled correctly. He uses Britain as an example to illustrate his point.

At the Atlanta Games in 1996, he points out, Britain won only one gold medal; it won 29 gold this Olympics. The secret, Mr Jaitley feels, was in Britain selecting the right disciplines and events to complete.

"Sports," he says, "is like manufacturing. One company cannot make everything, so you have to choose what you are good at. Britain decided to focus only on some events -- cycling, rowing, sailing, equestrian, which they have done well in. We should also focus on some sports -- wrestling, shooting, boxing, badminton... -- which should help us take off at the Olympics."

One of the pleasures at a Presidential At Home is meeting folks you have not seen in some time -- Venu Rajamony, the erudite and fine diplomat who is currently the President's press secretary; Indian Express Editor-in-Chief Shekhar Gupta, arguably India's finest columnist; United States Ambassador Nancy Powell, dressed in a natty salwar-kurta; Major General Ashok Mehta, a key commander of the Indian Army's Sri Lankan campaign in the late 1980s and now one of television's most perceptive talking heads; R Rajagopal, possibly the best-informed political reporter in the capital...

The Independence Day weekend finds one in an underground bunker somewhere in the northern sector. Jammu's newspapers are full of reports of Pakistani shelling on villages in the area, of villagers fleeing in panic, but in the army mess full of some of the military's best and brightest colonels, there is almost a disdain for the "Enemy"'s intentions.

Nothing is specified, but the view is that the "Enemy"'s recent firepower is an attempt to push in terrorists, a job made that much more difficult by the awesome soldiers who patrol the Line of Control and the electrified fence at the LoC.

No one mentions the P word here. It is always the "Enemy".

High up on a hill somewhere in the northern sector, a small group of Indian soldiers keep vigil on the "Enemy". The officer in charge of the post is a young captain, a year out of the NDA. His father works in a bank near Delhi. Along with him is another young captain, two years in the Indian Army, a native of Dharamsala.

Both fine men in their early twenties symbolise the gung-ho spirit that officers like Saurabh Kalia, Manoj Kumar Pandey and Vikram Batra had when they made the ultimate sacrifice to ensure India won the Kargil war.

Also at the post are a group of battle-hardened NCOs, men who have made defending the nation's borders their life's mission. One is delighted to know that the subedar major, a veteran of 27 years in the Indian Army, has a son who will join TCS next month as an engineer.

As officers and men tirelessly scan the horizon for any untoward movement by the "Enemy" -- these soldiers, one very senior officer tells me, can never let down their guard 24x7x365 -- one leaves the post with a spring in one's step and almost a song in one's heart, delighted that India's borders are secure in such enthusiastic and capable hands.

The Spy Who Dined With Me