Prime Minister Narendra Modi on Saturday shared a document with the people detailing the 'vikas yatra' or glimpses of development, empowerment and service during his government's second term. The document, shared by the prime minister on the occasion of the first anniversary of his second term on his Twitter account and web portal, detailed the steps taken by his government for the progress and development of the country.

The 'Vikas Yatra' module is divided into 15 heads ranging from ease of doing business, ease of living, to eliminating corruption and the country's fight against coronavirus.

'Have a look at the Vikas Yatra, that gives glimpses of our collective journey of development, empowerment and service,' Modi tweeted along with the document.

'Prime Minister Narendra Modi won the elections of 2019 and came back with a bigger mandate and greater support of people. This mandate with a larger majority, which is a rare phenomenon in democratic societies, was won on delivery of earlier promises along with support for the future roadmap that PM Modi's vision of New India presented to the people,' the introduction to the document said.

The expectations from Modi 2.0 are even bigger than they were from the first term, it said.

'Responding to this massive support from the people, PM Modi and the government have started delivering on big reforms, big decisions and big ideas from day one,' the document said.

'From ensuring a new dawn for Jammu and Kashmir and Ladakh to historic corporate tax cuts, from empowering farmers and traders with pensions to aiding a peaceful resolution to the Ayodhya issue, Modi 2.0 has begun on a high note,' it said.

Vikas Yatra module is part of the Narendra Modi website and has been updated with fresh details, the introduction said.

Modi, who commended all the volunteers who put the 'Vikas Yatra' module together and created diverse content that gives a comprehensive picture of the work done by the central government, shared some key articles from it.

In the times to come, healthcare will assume even greater importance and 'we in India have been working to create a system where the poor have access to top quality and affordable healthcare', Modi said on Twitter sharing the article 'Jaan hai to Jahaan hai: Status of health in India'.

'Education and health have always been considered as pillars of economic growth and development. An effective public health system that can assure the nation's health requires the consistent and focused efforts of the government,' the article said.

However, weaknesses in India's health infrastructure were clearly demonstrated for a long time, and took considerable effort of the Modi government to set it on a path of rectification, it said.

Modi also shared an article on self reliance in defence, space and atomic energy sectors, asserting that being self-reliant in the defence sector is the need of the hour.

He highlighted the importance of creating next-generation infrastructure and shared an article on 'National Infrastructure Pipeline --A key part of building a $5 trillion economy'.

On the country's fight against the coronavirus pandemic, the document said early steps against the virus, decisive lockdown, ramping up medical infra, making India one of the world's largest PPE makers, a slew of pro-poor measures and deep structural reforms is how the Modi government led the battle against coronavirus.

The Modi government's reforms and bold decisions have enabled India to become the fastest growing major economy, the document said.

Be it foreign policy or in national security, Modi always believes in putting India first, it said.

The work of the Modi government in ensuring health for all has seen some historic steps being taken, the document said.

The document has a separate section on 'eliminating corruption' which states that Modi has led a historic battle against graft and now honesty is honoured and transparency is the norm.

Modi also marked the first anniversary of his second term by writing an open letter to his countrymen, asserting that India has started traversing on the path to 'victory' in its long battle against COVID-19 while acknowledging 'tremendous suffering' of migrant workers among others.

He said his government has taken 'historic' decisions and the nation progressed rapidly in the last one year, even as he acknowledged that there is a lot that needs to be done and many challenges and problems face the country. 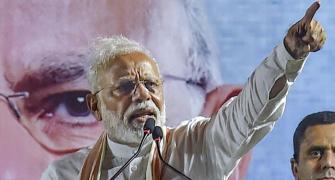